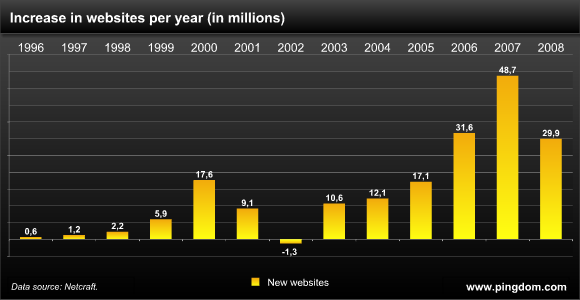 There are now 231.5 million Websites according to Netcraft. But last year the number of new sites added to the Web slowed down to 29.9 million, from 48.7 million in 2007. Royal Pingdom went through Netcraft’s server surveys to come up with the chart above, which shows the increase or decrease in the number of Websites for every year going back to 1996.

The growth of the Web so far can be broken down into two five-year cycles, where every year the growth rate gets bigger until there is an economic downturn, when the growth rate takes a breather. In 2001 and 2002 the growth slowed and even went into negative territory, and again in 2008 there was another slowdown in the number of sites added to the Web. It stands to reason that the number of new sites will ebb and flow with the global economy, but it is not clear that there is any direct correlation. For instance, so far in 2009 we’ve added a whopping 46 million sites, many of them Chinese blogs. The total for the year will almost surely be much greater than the 2007 increase, and is already larger than all the sites added in 2008.

Does that mean the global economy is already on a rebound or simply that countries like China and Russia are embracing the Web in a big way? These numbers also raise the question of how many sites does the world need—500 million, one billion, ten billion? Maybe the upper limit is the number of people who are on the Web, which is estimated between 1 billion worldwide (comScore) and 1.6 billion right now. Maybe it is more. How many Websites do you have?

Here are the top countries by Internet population according to comScore.  All the growth is coming from China, Russia, Brazil, and India. (Growth is compared from July, 2008 to March, 2009 for an apples-to-apples comparison because comScore changed its methodology slightly in July, 2008).