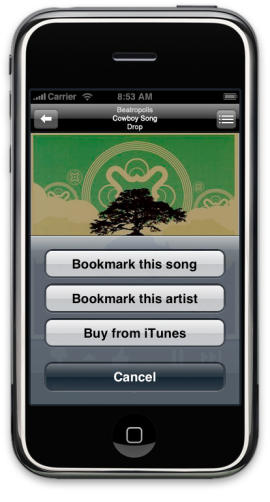 Pandora is a company that mainly makes its money through advertising deals on its streaming Internet radio service. But a growing portion of the business is also affiliate downloads of songs that users hear on Pandora and want to buy on either iTunes or Amazon’s MP3 service. And the biggest mover accelerating growth in that regard are downloads taking place on the iPhone.

Users are buying about a million songs a month now from these affiliate links on Pandora, CTO Tom Conrad tells me. Of those, a solid 20% are coming directly from Pandora’s iPhone app, which includes an easy link to open the iPhone’s iTunes app, and buy a track. That’s really impressive considering that it’s just one phone that a relatively small percentage of their users use.

But really, I’m not surprised by this at all, because Pandora has always been a brilliant music discovery service. And when paired with the iPhone, you have an all-in-one new music machine. And Pandora was actually the top downloaded app on the iPhone for all of 2008. But last month, when Apple completed removing DRM from all its iTunes tracks, it created an even a greater incentive to buy music that way. Now, I can buy music on the go, sync it back with my computer when I get home, and listen to it anywhere.

Another feature driving affiliate sales is the bulk music purchase option. This allows you to bookmark songs on Pandora, and with one click buy them all on either iTunes or Amazon. 10% of web users who are buying music through Pandora are using this bulk buy feature, Conrad says.

Here’s an interesting way to think about these affiliate sales. If Pandora is selling 1 million tracks a month, that’s $12 million in sales a year (though Apple and Amazon make the majority of that). But Pandora is still only less than 1% of all radio when you take into account the terrestrial and satellite varieties. Say hypothetically that Pandora made up 100% of radio, the potential sales of these affiliate tracks would then by $1.2 billion a year, as Conrad notes.

That of course is very unlikely to ever happen, even in Pandora’s wildest dreams, but still Conrad says that from Pandora’s own research, they know that for every song purchase Pandora drives, users are likely to buy 3 to 5 more songs on top of the one they found. At this 100% model, that would make Pandora a $3.6 to $6 billion a year business.

Why play such a hypothetical? Well because the total recorded music industry revenue last year was only $4.6 billion. Affiliate links can be big business on the web and on mobile.

Even before the iPhone app, Pandora was one of the top affiliate purchase drivers for Amazon and iTunes. And amazingly, their main competition wasn’t other online music sites, but instead was search and shopping engines like shopping.com. Given the boost Pandora is already seeing from the iPhone in this regard in just a matter of months, it seems pretty clear that mobile purchases could be a big deal down the road.

And just imagine if Apple one day lets apps access iTunes right from within the apps to ease the process even more. With in-app purchases coming in iPhone 3.0, something like that could be possible one day.