After the resounding success of several crowdfunding campaigns for its gamified smart bird feeder, Bird Buddy has raised an $8.5 million seed round. Its first product will ship in a few months, but it’s just the start of what the company hopes will be a new approach to using tech to better enjoy nature.

It’s an ambitious statement of purpose from a company working on something as apparently trivial as a bird feeder. But co-founder and CEO Franci Zidar explained how this market is something of a sleeping giant.

“Birdwatching is the second biggest outdoor hobby in the U.S., and huge internationally,” he said. No doubt this trend accelerated during the pandemic, when for many people birds provided a pleasant reminder that there is indeed a world outside their windows. “We spent the first half of 2020 doing a lot of validation, and it’s something people are really passionate and active about. Every metric that came back was insane.”

Still, one wonders, if everyone loves birds so much, why other camera-equipped bird feeders haven’t become commonplace. Zidar thinks they’re coming at the whole thing from the wrong direction.

“They saw these original ones as something for people super into birdwatching,” he explained. “But what we realized is it’s not just about building a smart bird feeder, but a brand and a company about reconnecting people with nature. We needed the beautiful hardware piece that people will have in the yard, but a big part of it was that story of reconnecting. It speaks to people who are bird-curious but didn’t get into it because it seemed passive — so we made something that turned passivity into activity.”

Suddenly, although the Bird Buddy doesn’t look fundamentally different (though better designed, to be sure) from what’s out there already, and costs about the same ($200 to pre-order), it looks like a way into the hobby rather than something only a serious hobbyist would buy.

The secret is in the life-imitates-art-imitates-life fact that birds are very Pokémon-like. Obviously birdwatching existed before the popular monster collection game, but they tap into the same “collect them all” instinct that some people have. Birds are “the perfect collectible,” Zidar said, an observation which manages to be both a crucial insight and face-palmingly peak tech.

But being precious about how people engage with one’s hobby is the very kind of gatekeeping behavior that deters those people from even trying. A cute app with badges, notifications, points, social sharing and other modern conveniences may not be how people envisioned the birdwatching community growing, but that may be just what’s needed.

The feeder itself seems nicely designed — they scored Kyle Buzzard, who designed the Chromecast and various other consumer tech items, whose friendly, rounded approach shows through here as well. It also looks big enough to accommodate medium-sized birds, something roofed designs don’t always allow. (If jays don’t fit, the feeder ain’t it, as I say.)

Not everyone can sit by their window all day and watch the birds come and go (though I do). So being able to be aware of who stops by, and receiving a pleasant surprise in the form of a seasonal species or neighborhood regular popping up in your notifications is a great alternative. 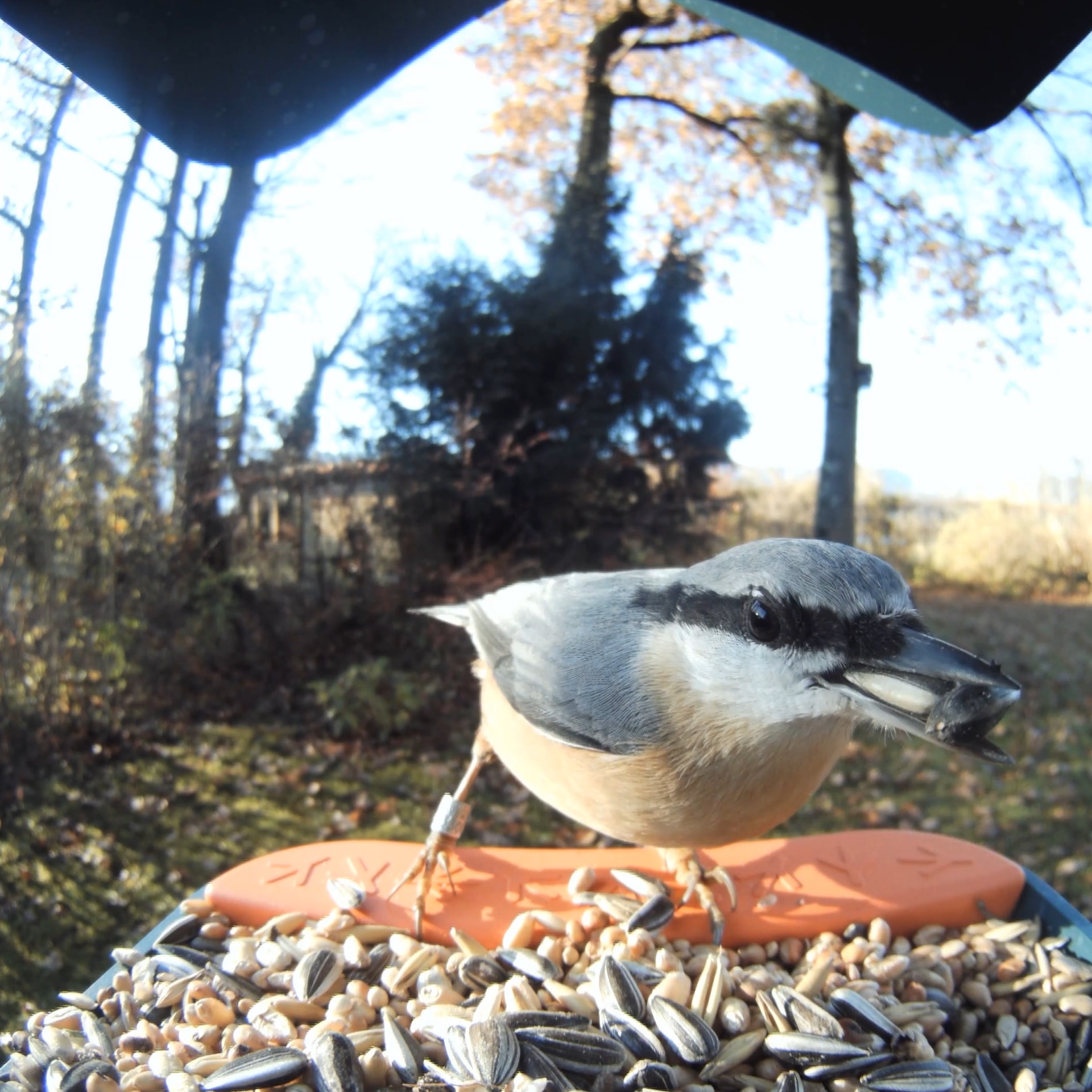 Inside the app there are the sort of “New bird!” achievements and tracking you might expect, and options to share images with others in the app or on social media. Feeders can also be made public — not for constant viewing but for individual bird visits.

One very attractive feature still in development is identifying individual birds, not just species. This would be a huge boon for birdwatchers who care about which jay or junco exactly is visiting their feeder — you could name it, compare with a friend down the block. Is Francine the flicker coming to your yard too?

Of course the smart layer comes with some risks, as typified by Ring, which has attracted controversy due to acting as a police surveillance network. Zidar acknowledged this tension as one faced by a lot of smartened-up gadgets.

“That’s very top of mind for us,” he said. “There’s no silver bullet, but knowing about the Ring fiasco gives us a lot of insight. We’ll make the device as secure as we can possibly make it, no low-hanging fruit with easy vectors of attack. Having said that, it’s your device, no one can access it unless you want to add your wife, your kids. Anyone who wants to share with the community, there will be a couple layers to that, like sharing for an hour, just sharing pictures of birds. The live thing doesn’t let you forget about it.”

Image analysis also provides a protective layer — images with people are automatically discarded. Users will be guided during onboarding to point their feeder at bushes or trees. And there will be the usual reporting capabilities necessary to a social platform.

One may very well wonder why, after three successive and successful crowdfunding runs on Kickstarter, IndieGoGo and a self-hosted system, totaling some $10 million, does this company need another $8.5 million in capital?

“With the best of intentions, millions of dollars disappear overnight when you’re building hardware,” explained Zidar. “You have to order components, pay taxes, fulfillment, shipping, all that not counting that 2021 was the worst possible year to build hardware, right? Availability was shrinking, prices were fluctuating, we had to have redundant components becasue we weren’t sure which we would be able to get. Shipping costs have risen 6-8 times too. Even shipping in January — we were supposed to ship in September originally — is kind of a miracle.”

Importantly though, he continued, the investment comes from a recognition by General Catalyst that the company represents an opportunity to engage with an under-capitalized population of hobbyists who spend hundreds on binoculars but buy $30 feeders. Zidar hopes to build a company whose primary intent and brand is that “reconnecting with nature” idea mentioned before, and for which the Bird Buddy is just the first step.

For him and his co-founder, “we’ve both done a lot of interesting stuff… but rarely do you have a core mission you can align with, making people care about nature and wildlife. And the best way to do that is get them to engage with us — to build a huge community of people who do that. So we’re building a brand that people will love and trust.”

As a very amateur birder myself I find it an attractive project, but of course it all depends on the execution. Hopefully we’ll be able to test out a Bird Buddy when it ships early next year and give an informed verdict on whether the team accomplished what it set out to do.