Ascend on Wednesday announced a $5.5 million seed round to further its insurance payments platform that combines financing, collections and payables.

This is the first funding for the company that is live in 20 states. It developed payments APIs to automate end-to-end insurance payments and to offer a buy now, pay later financing option for distribution of commissions and carrier payables, something co-founder and co-CEO Andrew Wynn, said was rather unique to commercial insurance.

Wynn started the company in January 2021 with his co-founder Praveen Chekuri after working together at Instacart. They originally started Sheltr, which connected customers with trained maintenance professionals and was acquired by Hippo in 2019. While working with insurance companies they recognized how fast the insurance industry was modernizing, yet insurance sellers still struggled with customer experiences due to outdated payments processes. They started Ascend to solve that payments pain point.

The insurance industry is largely still operating on pen-and-paper — some 600 million paper checks are processed each year, Wynn said. He referred to insurance as a “spaghetti web of money movement” where payments can take up to 100 days to get to the insurance carrier from the customer as it makes its way through intermediaries. In addition, one of the only ways insurance companies can make a profit is by taking those hundreds of millions of dollars in payments and investing it.

Home and auto insurance can be broken up into payments, but the commercial side is not as customer friendly, Wynn said. Insurance is often paid in one lump sum annually, though, paying tens of thousands of dollars in one payment is not something every business customer can manage. Ascend is offering point-of-sale financing to enable insurance brokers to break up those commercial payments into monthly installments.

“Insurance carriers continue to focus on annual payments because they don’t have a choice,” he added. “They want all of their money up front so they can invest it. Our platform not only reduces the friction with payments by enabling customers to pay how they want to pay, but also helps carriers sell more insurance.” 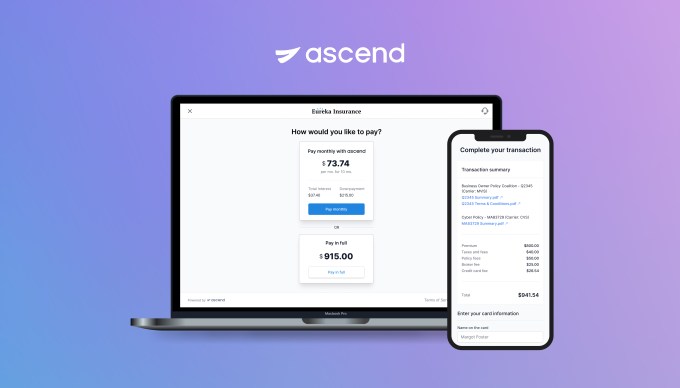 Startups like Ascend aiming to disrupt the insurance industry are also attracting venture capital, with recent examples including Vouch and Marshmallow, which raised close to $100 million, while Insurify raised $100 million.

Wynn sees other companies doing verticalized payment software for other industries, like healthcare insurance, which he says is a “good sign for where the market is going.” This is where Wynn believes Ascend is competing, though some incumbents are offering premium financing, but not in the digital way Ascend is.

He intends to deploy the new funds into product development, go-to-market initiatives and new hires for its locations in New York and Palo Alto. He said the raise attracted a group of angel investors in the industry, who were looking for a product like this to help them sell more insurance versus building it from scratch.

Having only been around eight months, it is a bit early for Ascend to have some growth to discuss, but Wynn said the company signed its first customer in July and six more in the past month. The customers are big digital insurance brokerages and represent, together, $2.5 billion in premiums. He also expects to get licensed to operate as a full payment in processors in all states so the company can be in all 50 states by the end of the year.

The ultimate goal of the company is not to replace brokers, but to offer them the technology to be more efficient with their operations, Wynn said.

“Brokers are here to stay,” he added. “What will happen is that brokers who are tech-enabled will be able to serve customers nationally and run their business, collect payments, finance premiums and reduce backend operation friction.”

Bill Trenchard, partner at First Round Capital, met Wynn while he was still with Sheltr. He believes insurtech and fintech are following a similar story arc where disruptive companies are going to market with lower friction and better products and, being digital-first, are able to meet customers where they are.

By moving digital payments over to insurance, Ascend and others will lead the market, which is so big that there will be many opportunities for companies to be successful. The global commercial insurance market was valued at $692.33 billion in 2020, and expected to top $1 trillion by 2028.

Like other firms, First Round looks for team, product and market when it evaluates a potential investment and Trenchard said Ascend checked off those boxes. Not only did he like how quickly the team was moving to create momentum around themselves in terms of securing early pilots with customers, but also getting well known digital-first companies on board.

“The magic is in how to automate the underwriting, how to create a data moat and be a first mover — if you can do all three, that is great,” Trenchard said. “Instant approvals and using data to do a better job than others is a key advantage and is going to change how insurance is bought and sold.”