At a time where all of the news seems to point toward negative economic activity, Synergy Research released a report today that data center M&A activity made a strong showing this quarter, already surpassing 2019 levels.

The surge was mostly related to the $8.4 billion Interxion acquisition by Digital Realty, which Synergy says was the largest data center deal ever. It pushed the deal total this quarter to almost $15 billion on 28 closed deals.

2017 was the best year ever since Synergy has tracked these deals with more than $20 billion trading hands. That record could easily be within reach this year if this level of investment continues. 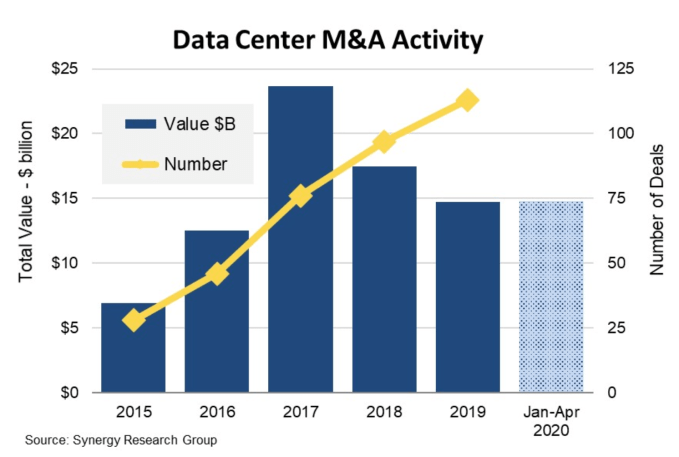 Of course, in the current economic situation, there is no guarantee that will happen, but it is clear that cloud usage is going strong and data center demand is something that’s not likely to abate any time soon. In fact, Synergy’s chief analyst John Dinsdale believes the numbers will continue to climb with lots more deals ready to close soon. He says that should make it a bumper year for data center M&A activity.

“In less than four months, the M&A value has already surpassed 2019, in addition to which we are aware of 17 more agreed deals that are pending closure plus a few other potential multi-billion dollar deals,” Dinsdale said in a statement.

He added, “Outsourcing trends and the aggressive growth in cloud services are driving ever-growing demand for data center capacity, which in turn is fueling both industry restructuring and a need to find new sources of investment capital.”

Synergy has been tracking the data center M&A market since 2015. Since that time, it has identified 388 deals totaling over $90 billion. Looks like that number is only going to keep growing this year in spite of external economic factors.