Augmented reality has seen plenty of hardware failures, but investors are still interested in the platform’s potential to help consumers solve niche problems.

Form has been building AR-enhanced swim goggles that allow swimmers to track their pace, distance and stroke rate on a miniature heads-up display inside the goggles.

The Vancouver startup tells TechCrunch they’ve raised $8.5 million ($12M CAD) in Series A funding to continue scaling their augmented reality product into a major swim tech brand. The round came from a slew of investors including large family offices in the UK and Denmark as well as Silicon Valley Bank, the startup said.

Form CEO Dan Eisenhardt has already had an exit in the consumer AR business, Recon Instruments, a biking and skiing AR goggles company that Intel acquired for an undisclosed sum back in 2015. He launched Form in 2016 and started shipping the company’s swim goggles last year.

The AR hardware market has had a tough couple of years, general purpose AR has been a hard sell for consumers, leaving well-capitalized companies like Magic Leap forced to pursue enterprise and public sector contracts. Eisenhardt says that consumer aren’t ready for a general purpose device and that the AR market likely won’t mature “until the late 2020s.”

“There is no horizontal play until they you’ve got a lot of vertical opportunities,” Eisenhardt told TechCrunch in an interview. “There are 240 million swimmers in the world and there’s an opportunity for a billion-dollar company here.”

Part of the challenge of marketing a mainstream AR devices has been zeroing in on use cases, but high price points has also been a major roadblock. Form has prioritized a device with few additional bells and whistles but an accessible price point, retailing for $199. 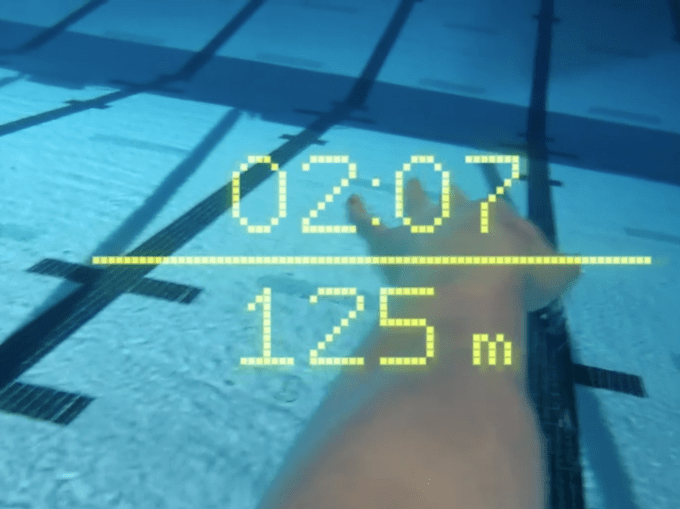 In terms of functionality, you certainly won’t be pulling up any photos or searching for directions on the single pixelated monochrome mini-display, but that probably isn’t something you’d be doing underwater anyway. The startup’s focus on simplicity leaves them with a purpose-driven device that aims to give swimmers a persistent means of tracking their progress while swimming, something a smart watch can’t do.

A lightweight computer module in the same eye cup as the display measures input from onboard sensors that detect a number of metrics including interval time, rest time, stroke rate and count, distance per stroke, pace per 100 or 50 meters, length count and calories burned. The goggles claim a 16 hour battery life.

One of the company’s biggest design challenges has been perfecting the device’s fit while allowing users to orient the device to put the display in front of either eye. The company includes seven different nose bridges with the device, but Eisenhardt says that making a one-size-fits-all solution has been a “big challenge.”

For now, the startup is focused on sales of its device, which can be purchased through its site as well as the MoMa Store. Eisenhardt has not ruled out the potential for more services focused on the swimming market down the road.

“Look what Peloton has done for cycling,” Eisenhardt says. “Once you’ve got them locked in with the hardware, the party begins.”