What’s the opposite of a green thumb?

Whatever it is, I have that. My house and yard are full of succulents not because they’re trendy, but because anything else I try to plant dies within a month. When I turn to Google to figure out why my zucchini plant randomly turned white and fell over (did I over water it? Under water it? Plant it on the wrong side of my house? Look at it the wrong way too many times?), I fall into a rabbit hole of forum posts with a million different answers, get overwhelmed, and go back to buying my zucchini from the store like a chump.

Avalow, a company presenting in the TechCrunch Disrupt SF Startup Battlefield today, wants to help would-be gardeners like myself with a solution that’s 50% hardware and 50% online coaching.

Unlike most of the hardware that hits the stage at Disrupt, you don’t plug Avalon’s hardware into anything. There’s no Bluetooth, WiFi, batteries, or robotic arms involved.

Instead, they’ve built a self-watering, sub-irrigation-based, raised planter bed. You fill a water reservoir about once a week, and your plants pull up water through the soil by way of capillary action. By letting the plants pull up just the water they need, the company says their planter requires about 30x less water than top-down gardening might.

Their planter costs $400, which might seem a bit wild to anyone who’s used to growing things at the cost of digging a hole in the ground. For comparison, a basic, all-wood raised planter box of similar dimensions (without the self-watering reservoir) would cost you $50-$150 from a big box store. Avalow’s bed is built to last — the company says it should hold up for at least 25 years, though some parts like the self-watering system’s wicks should be replaced every 5 years or so. It’s also insulated to keep your plant’s roots safe through weather hot and cold.

The company’s founders tell me they’ve shipped about 400 units so far during its pre-launch pilot program. 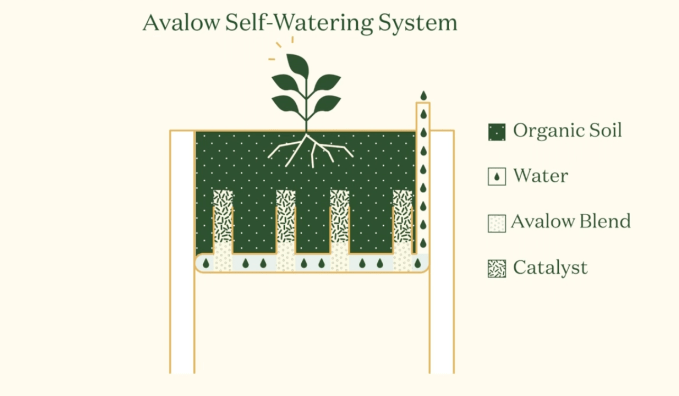 But there’s a bit more to Avalow than a fancy planter. That feeling of disappointment that comes when you go out to check your plants and find that, after 5 weeks of careful watering and care, your little plant friend has suddenly dropped dead? They want to help you avoid it — and if something does go wrong, help you figure out exactly what happened.

To do this, Avalow is also selling a gardening coaching service. At around $120 per season (or roughly $33 per month if bought annually), their experts will help you figure out what you should grow (based on where you are, the local climates, and your personal goals), when to harvest, etc. When your plant does something funky — be it mystery spots on the leaves, sudden plant death, or anything in between — you can chat with your gardening coach for advice, sending them pictures that might help them figure out what’s going on. They’ll send you the soil and seedlings to get started, plus whatever soil amendments they recommend to make things grow best from season to season. It’s like having a really, really smart gardener friend on speed dial, except they don’t get annoyed when you call them about your zucchini for the seventh time.

Avalow partners with expert gardeners and hires them as coaches. Their coaching team currently includes plant biologists from UC Berkeley, orchard managers, and master certified gardeners. With decades of experience, they’re able to adapt their advice across regions and climates.

As someone who finds himself thinking “I should totally grow some vegetables!” once a year only to end up disappointed and hungry… I totally get this. Having your plant die randomly six weeks into the process sucks and is super demotivating. Having someone who can say “Oh! That’s not your fault, you just need more [whatever] in the soil!” would be real nice. I don’t know that I’d sign up for it season after season, but I can definitely see myself using it to get things going (/growing.)