Mixhalo — the startup co-founded by Incubus guitarist Mike Einziger and his wife, violinist Ann Marie Simpson-Einziger — has raised $10.7 million in Series A funding.

The company’s initial goal was to bring better sound quality to concerts. Instead of hearing music blasted out of speakers, users can connect their smartphone to a network (the startup creates its own wireless channel that doesn’t rely on the venue’s potentially overloaded Wi-Fi or cell networks). Then, through their earbuds, they’ll hear the same sound mix that the musicians receive through their in-ear monitors.

Mixhalo launched two years ago at TechCrunch Disrupt NY, where Incubus and investor Pharrell Williams took the stage to play a couple of songs. The sound arrived loud and clear through my earbuds, and the experience didn’t feel too different from a normal concert.

Since then, Mixhalo has also been used at Y Combinator Demo Day and deployed on tours by Charlie Puth, Incubus and Metallica, as well as Aerosmith’s current Las Vegas residency.

And at the beginning of this year, Marc Ruxin joined as CEO. Ruxin previously led the music discovery startup TastemakerX (which was acquired by Rdio), so this is clearly an area that interests him, but he told me that he wasn’t actually eager to return to the music business. However, he was wowed by Mixhalo’s sound quality, and as he talked to Einziger (who serves as the startup’s chief creative officer), he became convinced that the technology could be used at a wide range of events and venues — conferences, sports, museums, megachurches and more. 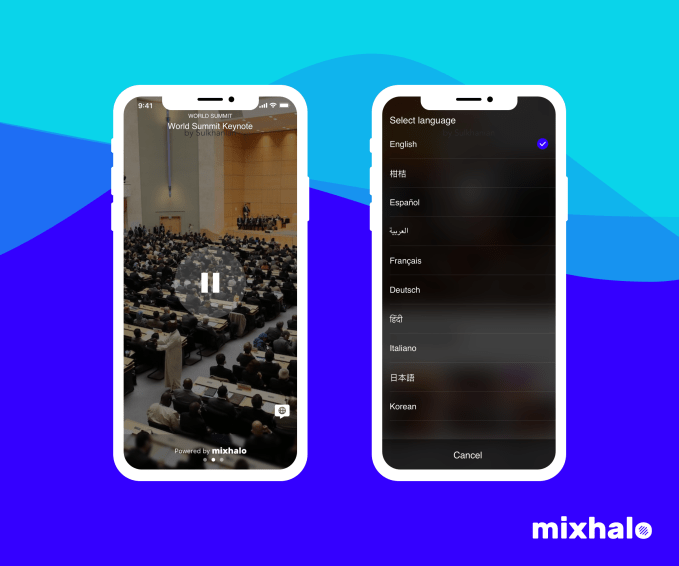 When I’ve described the idea in the past, there’s usually some skepticism about whether concertgoers really care that much about sound, and concern about whether wearing headphones diminishes the social experience.

Ruxin countered Mixhalo offers a number of benefits beyond sound quality — there’s the ability for each listener to control their own volume, and an opportunity to create unique experiences, like offering multiple mixes for a single concert, or watching one band at a festival (or one presenter at Demo Day) while listening to another via Mixhalo.

He also argued that people don’t realize how bad most concert audio is until Mixhalo gives the chance to experience something better.

“We’re definitely solving a problem in music that people don’t realize they have,” he said, comparing it to watching an old TV and thinking it was fine, until you had the chance to watch in HD: “Now, sports that’s not in HD looks crappy.”

As for the effect on the social experience, Ruxin said the idea isn’t to turn the whole event into a silent disco. Instead, Mixhalo allows the audience members to choose the experience they want. And that can change from song to song — he recalled seeing some fans listen to Mixhalo for most of a concert, then take their headphones off to sing along with the hits. Others did the opposite, wanting to get the best sound quality on their favorite songs.

Ruxin said he’s primarily focused on music and sports for now, but he’s also open to working with partners outside those areas, because the technology can be installed in, say, a Broadway musical with “no technical tweaks.”