Carro, an automotive marketplace and car financing startup based in Singapore, has closed a $60 million Series B round to scale its business in Southeast Asia.

Carro raised a $12 million Series A round in March 2017. This latest capital takes it to $78 million from investors to date, according to Crunchbase.

The 2.5-year-old company said in an announcement that $250 million of vehicles were sold last year across its three markets: Indonesia, Thailand and Singapore. That’s more than double the $120 million it claimed in 2016. Last March, Carro introduced its Genie Finance underwriting business, and over its first year, it claims to have originated over $100 million in loans while amassing a loan book of nearly $40 million.

Carro CEO Aaron Tan previously spent time at Singtel Innov8 and is one of a trio of co-founders. Tan told TechCrunch that the capital will initially be spent growing Carro’s business in Indonesia, Thailand and Singapore, but further down the line, there’s a plan for expansion.

“The exact markets are still to be determined but it may be a small setup in Japan and other sources of cars,” he added. 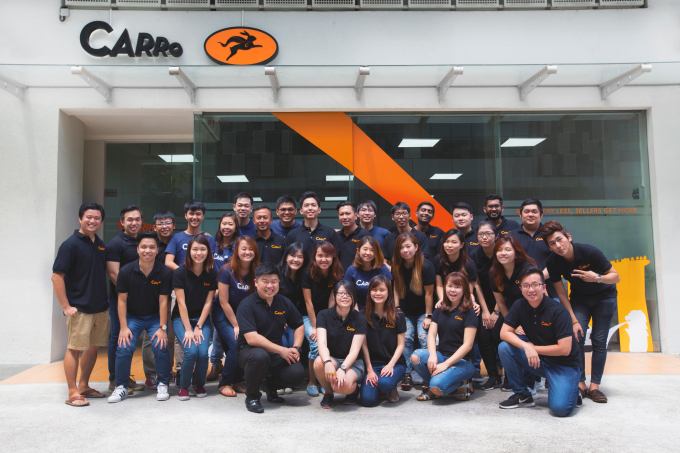 Carro has already expanded in terms of services. Initially a vehicle marketplace, it launched Genie Finance and has also forayed into insurance brokerage and road-side assistance. It recently introduced a service that completes vehicle sales in 60 minutes — Carro Express — which it said is now available in 30 locations across Southeast Asia.

“We will double down on our online marketplaces and financing in emerging markets this year. Ultimately, we want to improve the experience of selling and buying a car, as well as provide access to capital to the next billion people, which will improve the quality of lives,” Tan said in a statement.

Carro is rivaled by a number of startups, including BeliMobilGue in Indonesia, Carsome, iCar Asia and Rocket Internet’s Carmudi, although with its new raise in the bank Carro is the best-funded by some margin.

In the case of Carmudi, the business has retrenched itself. At its peak it covered over 20 markets worldwide across Asia, the Middle East, Africa and Latin America, but today its focus is on Indonesia, the Philippines and Sri Lanka.