“I should go on a weekend trip,” you think to yourself. “I’ll go to the mountains!”

And then the weekend comes and all the hotels are booked and you’re tired and the mountains are far and hey look, Netflix!

Wing It is a Facebook Messenger bot that tries to get you out of that rut. You punch in your criteria, and it’ll pop up every once in a while when it finds trips that fit the bill, recommending accommodations and an activity or two in the area.

Wing It asks just a few questions off the bat: Where do you live? How far do you want to go? Is it just you and a partner, or a big group of friends? How much is each person looking to spend?

A few minutes later, it’ll respond with a short list: a few places to stay and some things you might want to do while there. Right now, that’s mostly hikes and trails; eventually, the Wing It team hopes to expand their knowledge base out to things like kayaking trips, rock climbing, or nearby surf spots. 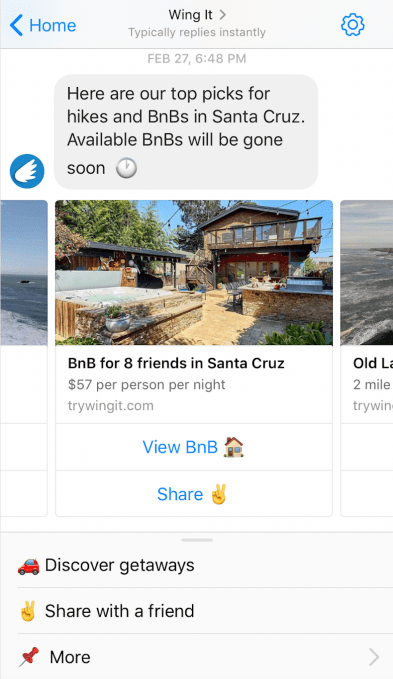 Wing It focuses on things that are far enough away to feel like a vacation, but close enough to do on a whim. While early iterations of the bot tried to offer up trips involving last minute flights, they’ve since learned to focus on things within driving distance. “People would say they’d go on a last minute flight… 98% of people would say ‘I’m in!’. Then you send’em that, and give them the option to book it, and… nothing.”

The underlying concept of a trip planning search engine is by no means new, but there’s something nice about the way it all fits together here. Too many weekend trips die in the planning phases — that moment when you dive into Airbnb and drown under a million options and decide to do it later. Wing It boils it all down to a handful of choices based on what it already knows you’re looking for.

That slimmed down and curated offering is what Wing It’s co-founders, Luis De Pombo and Gabriel Ascanio, are going for. After meeting in school, they started working together on side projects on the weekends. They’d try to mix up the scenery by traveling to new locales on the weekends, only to spend half their time just searching for the right place.

So why a Messenger bot? “Because of the ease of reaching people”, Gabriel tells me. There’s no app to download – you just start a conversation with the bot. Meanwhile, the team can iterate on their concept almost instantly. If the data shows users are liking a feature, they can play it up with no need for a downloaded update; if they change something and usage tanks, they can reverse course on the fly.

Wing It is part of Y Combinator’s Winter 2018 class, and has yet to raise funds beyond that.