Walmart and Google are today announcing a new partnership that will enable voice shopping through Google Assistant, Google’s virtual assistant that lives on devices like its smart speaker, Google Home. Specifically, consumers will now be able to take advantage of Walmart’s “Easy Reorder” feature through an integration with Google’s shopping service, Google Express. This will allow consumers to shop from hundreds of thousands of Walmart products just by speaking, the companies explain.

Related to this, Google Express is also today ditching its membership fees, and now promises free delivery across its retailers in one to three days, as long as customer orders are above each store’s minimums.

This is a significant change for Google Express, which before charged customers $10 per month or $95 per year for a membership. The delivery service currently provides access to a number of big-name retailers, including Target, Costco, Kohl’s, Bed Bath & Beyond, PetSmart, Staples, Toys R Us, Walgreens, and many others across a variety of verticals like apparel, home goods, hardware, health and personal care, sporting goods, and beauty.

Google believes its fees were limiting adoption and were particularly cumbersome when it came to enabling voice shopping.

“The membership was getting in the way in terms of the amount of friction in the experience,” Brian Elliott, GM at Google Express, tells TechCrunch. “If you’re on a mobile device, it’s easy enough to explain you can either pay $4.99 to get this stuff delivered, or you can buy a membership.”

“Even then, you’re putting some degree of friction in front of the user,” he admits. “And it gets really hard to figure out how you’re going to tell somebody in a voice-based experience the difference between a membership and a non-membership,” Elliott says.

The company declines to say how many people have shopped using Google Express, or how many sales have run through the platform.

Prior to today, Walmart was not participating in Google Express at all, as the retailer is capable of handling its own e-commerce orders. It even this year launched its own 2-day shipping program, which unlike Amazon Prime, is free, provided the order is $35 or more.

However, Google Assistant integration means Walmart can leverage a new e-commerce platform it doesn’t have access to otherwise: voice computing.

Some analysts believe voice could be a major driver of future retail. For instance, RBC Capital Markets said Alexa could become a $10 billion business by 2020, thanks to its ability to power voice-driven shopping, in addition to other platform revenues.

Assuming that’s true, Walmart needs to get its skin in the game, too.

And the only other major player in town besides Amazon is Google Home. (Apple’s HomePod has yet to ship, and as of yet, there doesn’t seem to be a plan for voice-powered, third-party apps. Microsoft’s Cortana-powered speakers, meanwhile, are barely a blip.)

“It’s still really early days [for voice shopping]. However, we have watched the advancements in artificial intelligence over the previous two years and can extrapolate as to where it’s going,” says Marc Lore, Walmart’s head of e-commerce in the U.S, speaking about Walmart’s voice shopping ambitions.

“We do think that, in the future, voice will be orders of magnitude further along than it is today in understanding and responding to consumer needs. It’s going to be a powerful mechanism to enhance the shopping experience,” he adds. 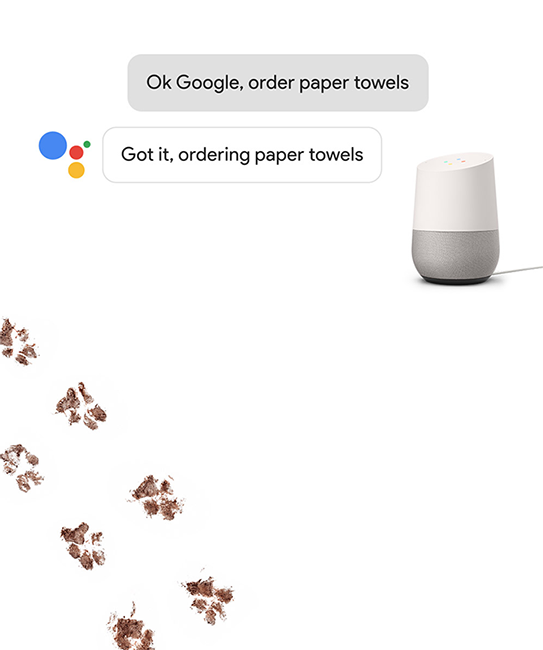 Walmart is not the only retailer that can be shopped by voice on Google Home – Google Express announced its integration with Google Home back in February.

But by tying into Walmart’s new Easy Reorder feature, regular Walmart shoppers will more easily be able to place spoken orders for products. That’s because Easy Reorder understands your personal preferences based on your prior Walmart.com and in-store purchases. It knows the brand you use, and the size you want; it knows when you ordered last, and how often.

If the item is over $35 – Walmart’s minimum for free shipping – Google will ask if you’d like it delivered in two days. If it’s under that threshold, it’s added to your Walmart cart, accessible in both the Google Home companion app and Google Express app. When your cart fills above the $35 minimum, you’ll be prodded to complete the checkout.

While the initial integration is focused on Easy Reorder, Walmart is characterizing this as a partnership with Google because it has broader plans to work with the company on voice shopping in the future.

Next year, it will add support for buying groceries via voice, which you can then pick up at the store already bagged and ready, or have delivered, depending on availability of those checkout options. Lore also sees the potential for the system to get smarter in time, as it learns more about customers’ and their preferences.

Above: Easy Reorder, as it works through Walmart’s own mobile application

“As voice gets more mature, it will require a deep personalization, and the product recommendation will lend itself to one best answer,” he says. “I think we have a long way to go there, but I’m excited about the possibilities.”

Walmart’s integration with Google Express and Google Home will launch in late September.

Google Home’s smart speaker is the only way to voice shop Walmart at launch. But Elliott tells TechCrunch the plan is to roll it out to Google Assistant and voice interactions across other devices in time.

However, without a similar voice app for Amazon’s Alexa, Walmart could be missing out on a sizable slice of the voice computing market, given Amazon’s lead. Amazon is forecast to have 70 percent of the voice-enabled speaker market this year. By 2020, it’s projected that there will be 128 million Alexa devices installed.

We asked Lore, then, if Walmart would ever be shoppable from Alexa. He answered simply: “No.”