Walmart has just issued its strongest response to the growing Amazon threat, since its acquisition of e-commerce newcomer Jet.com last summer. Starting today, Walmart will begin offering free, two-day shipping on over 2 million items, with no need for a membership fee. The range of items will include “everyday essentials,” like household products, baby needs, pet supplies, cleaning supplies, beauty products, electronics, toys and grocery items that don’t need refrigeration.

As you may recall, Walmart previously tested its own competitor to Amazon Prime with ShippingPass, a low-cost alternative to Amazon’s membership program that came in at about half the price of Prime ($49 per year vs Amazon’s $99 per year). The service had initially begun as a 3-day shipping service, but Walmart quickly closed the gap and began testing 2-day shipping last spring.

Today, as of 8 AM ET today, ShippingPass is going away. In its place, Walmart will simply offer free, two-day shipping on millions of products which will be flagged as available for fast delivery on its website.

However, unlike Prime, which has no minimum purchase requirement, Walmart’s free shipping will require customers spend at least $35.00. This is lower than before – previously, the minimum was $50.00. Shipping to stores for pickup will remain free, with no price threshold required.

Same-day store pickup also continues to be available at over 4,600 stores, and online grocery pickup is live at over 600 stores in the U.S., with plans to expand further this year.

As a result of the move, Walmart says that ShippingPass customers will receive a refund on their membership, since the program is no longer required in order to take advantage of free shipping.

“ShippingPass was a very critical part to getting us to where we are today,” noted Walmart spokesperson Ravi Jariwala. “It validated the operational efficiencies of the new e-commerce fulfillment centers that we’ve built up over the last 18 months. It validated that they’re in the right locations to be able to cater to customers in their geographies, and be able to deliver within that 2-day or less time period,” he explained.

Above: ShippingPass, which is now being discontinued

Walmart now has fulfillment centers in five different geographic regions, including Texas, Pennsylvania, Indiana, Georgia and California, and has one planned for Florida this year.

The news of the free, 2-day shipping was publicly announced via blog post by Marc Lore, the president and CEO of Walmart U.S. e-Commerce, who joined Walmart following its $3 billion acquisition of his e-commerce startup, Jet.com. Before Jet, Lore had sold his earlier e-commerce company Quidsi, home to Diapers.com and others, to Amazon.

Jet.com continues to operate as an independent brand at Walmart. But its influence on Walmart.com can be seen here, as Jet also offers 2-day delivery on hundreds of thousands of common items, and ships for free on orders over $35.00.

While the two brands remain separate, Walmart says that it has merged with Jet on the backend, combining the warehousing and supply chain. That means both Walmart and Jet boxes will come out of these same fulfillment centers.

In the future, Walmart may also adopt some of Jet.com’s other innovations. 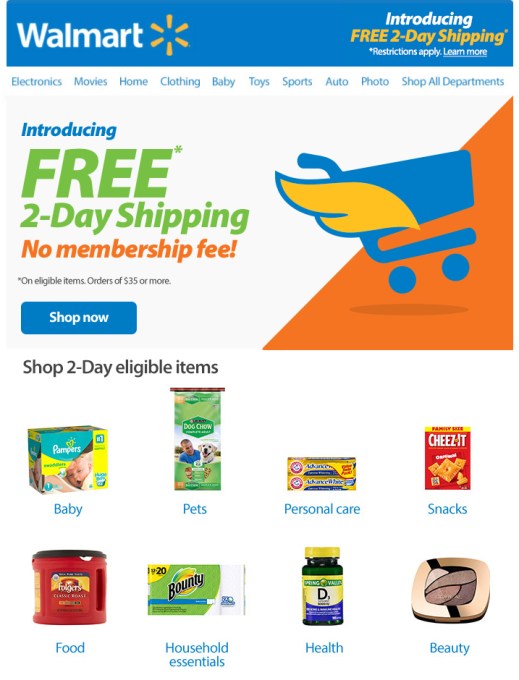 Jet had come up with a number of ways to deliver discounts to customers the more they shopped. Its “smart cart” technology would reduce prices if customers bought items that ship from the same location, or if they waived returns, or bought using a lower-fee payment method.

“Today’s announcement is focused on shipping, but there’s a lot of additional components that we’ll be looking at,” said Jariwala, noting in particular Walmart was looking at Jet’s smart cart feature.

The integration of Jet.com with Walmart has led to something of a shakeup in the e-commerce side of the retailer’s business.

Following the acquisition, there were layoffs in the e-commerce division, which also affected Walmart’s innovation arm, @WalmartLabs. Lore explained the changes at the time as being necessary for speed and simplicity. The layoffs were also part of a larger corporate-wide restructuring that would see the elimination of 1,000 positions.

But Lore’s post is enthusiastic about the results of those changes.

“Since joining Walmart, I’ve been getting a lot of questions about what’s next for Walmart.com. For me, the road ahead is pretty simple: We’ll keep our fanatical commitment to saving customers money – it’s who we are. And we’re going to be equally obsessed with saving our customers time,” he wrote.

“I’ve been here for four months and I couldn’t be more excited about how fast we are moving. It feels like a startup.”