Gfycat, the startup that recently raised a whopping $10 million for its user-generated content platform that lets you creating silent, looping animations and videos, has now launched its first mobile app. Designed for iMessage, Gfycat lets you search for, send and create your own “Gfycat Loops,” which you can also augment with your own emojis and captions.

There are already a number of iMessage apps that let you access or send GIFs via text messaging on devices running Apple’s newest iOS 10 mobile operating system. Giphy, for example, has one, Momento automatically makes GIFs from your Camera Roll’s photos, and Tumblr lets you create your own GIFs, to name a few.

Gfycat, however, has already grown its database of animated loops to include 25 million pieces of unique content. And technically speaking, these are not GIFs – Gfycat’s content is compressed 20 times more efficiently than a .gif file, which means they can display with 16 million colors, instead of the 256 colors that .gifs are limited to, the company claims. In other words, while these Gfycat Loops appear somewhat GIF-like, they’re actually looping videos with richer colors.

Gfycat’s web platform is where users, before now, could browse its content and access its GIF uploading tools. Today, that site sees over 75 million monthly visitors on and off the platform. Its users watch 1.5 billion user-generated clips per month. The site is also a top 60 U.S. site, according to Alexa’s web rankings, and recently rolled out an API that allows developers to turn their own videos directly into Gfycat Loops.

The service’s GIFs are also integrated onto many web publishers sites, including the WSJ and The New York Times.

In terms of bringing the service to mobile, Gfycat co-founder and CEO Richard Rabbat explains that the team was very excited about the possibilities of the iMessage platform.

“As we approached mobile, we focused on enabling more creation in the iMessage app, but made the creation appropriate to the medium,” he says. “When you take a clip, we apply a technique called palindrome looping – also referred to as ping-pong – to make the GIF loop seamless.”

So far, most Gfycat users are very focused on selfies, Rabbat notes, with 90 percent taking these GIF Loops using the forward-facing camera. This makes it a natural fit for iMessage, and the personal sharing that takes place in text messaging. Early adopters of the iMessage app are also interested in other types of personal expressions and reactions, like winks, love, hearts, and “awww.” 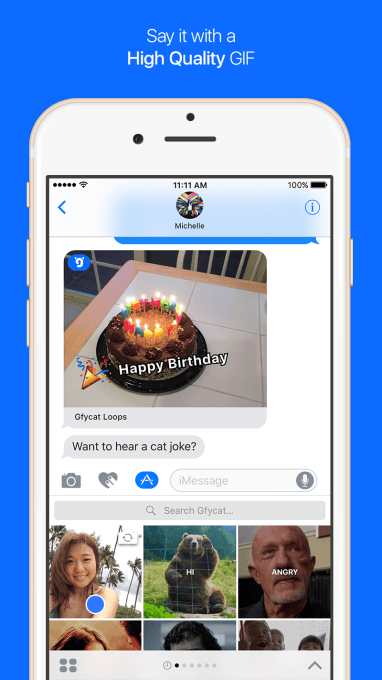 Plus, iMessage supports the higher quality content Gfycat produces, which is another reason why the company choose the platform for its first entry point onto mobile.

It’s worth noting, too, that Gfycat’s audience skews fairly young: the 13-17 year olds and the 18-24 year olds are the top age groups using Gfycat. They view, on average, around 4 GIFs daily, the company says.

With the new app, you can search through Gfycat’s library of 25 million GIFs which are organized into a number of reaction categories, like “LOL” or “Fail,” for example. You can also access tools to make your own GIFs, which can include emojis and captions. These Loops are automatically saved to your Camera Roll, and can be easily sent to friends via the iMessage integrated app.

The company isn’t currently making money, but has future plans which involve working with brands to reach younger consumers who no longer watch TV and consume much of their content via media on their smartphone. Native ads are an area which Gfycat will explore further down the road – something it believes will appeal to brands because of GIFs’ viral nature.

The new app is a free download on the iTunes App Store.