It was a challenge: finding a day in New York City when it wasn’t raining or sweltering, simply so I could get an hour with the SpeedX Leopard racing bike. Notable not only for its svelte design and concealment of all wires, but for being the most-funded bike on Kickstarter to the tune of $2.3 million, all by a brand based out of Beijing, China.

That’s right: $2 million was publicly raised for a bicycle. However, this isn’t an ordinary Schwinn, but a racing machine with Shimano crankset, front and back derailleurs, cassette sprockets, shifters and B.B. set.

In other words, this is a very fast racing bike, via components alone. Pair that with the sleek military-grade carbon fiber frame, fork and bars and the result is a bike you can lift with a single hand. It even has a rear brake light! Yes, that impresses some people, while also being a critical feature for night riding.

SpeedX plans to start shipping its Kickstarter bikes in the coming weeks, with sales opening up for the Leopard at $1,499 (seen here) and the $2,499 Leopard Pro (professional forks, handlebars seat, tires, flashy red paint, etc.).

Also, there’s another feature to the Leopard bike: an onboard cycling computer, with companion iOS app — more on that later. 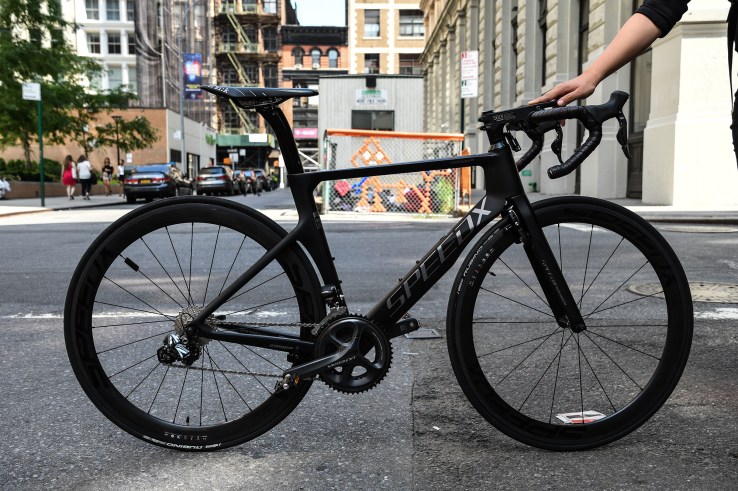 Marvelous. It does make some changes to your rider stance: you lean forward more on a racing bike, using arm and core strength to get more of the horizontal leverage you’d find on “normal” bicycle bars. Once you get over that and find a posture that works for you, it’s all about shifting the two front gears with the 8 (or so) rear ones so you can speed off.

Yes, all those gears mean that with a healthy human, you can go really fast on this bike.

Yes, all those gears mean that with a healthy human, you can go really fast on this bike. Some pros that had some time to test the Leopard and its pro version were reported to reach speeds over 100kph (or 60mph), which is definitely within the realm of imagination.

But what if you’re not a pro cyclist? It doesn’t matter, as cycling is still a great workout for cardio and legs.

As for the smart functions of the bike, there is nothing too crazy here. A single button gives you access to a mixture of stats, including average speed, calories burned, pace, distance traveled and the like. With the help of the app, I’d be able to follow routes and challenges set by other riders or SpeedX, which practically gamifies the experience.

Regarding handling and overall smoothness: though I’d opt for the Westside Highway and Central Park instead of Waverly Place. This is location-specific, but roads here are bumpy, cobblestone or otherwise just detrimental to one’s pelvic region.

Remember, race bikes aren’t mountain bikes. They don’t really get suspension forks, kickstands or mounts to lock them up — they’re speciality tools, which require some sort of maintenance.

If you’re in the market for an aero bike, then SpeedX might have something here for you, however I’d wait for Leopard bikes to start shipping and for new riders to report back. Otherwise, this one is greenlit.