It doesn’t matter if a stream is live if you don’t hear about it until after it’s over. So today Facebook got more serious about its “Live” streaming feature and competing with Periscope by adding a Subscribe button to streams of public figures. Once you click the Subscribe button on a live stream or recorded replay of a stream, you’ll get a push notification whenever that celebrity, journalist, politician, or other bigwig starts a live stream.

Facebook could have just auto-subscribed you to Live notifications from any public figure you already Like or follow. Periscope basically does this, defaulting you to subscribe to stream notifications from all your Twitter follows unless you unselect them during onboarding. But too many annoying alerts is an easy way to make people hate livestreaming and turn off push, so Facebook’s is being a little more cautious.

The Subscribe button could pull a lot more users into Facebook Live streams, which will in turn inspire public figures to film them. For big stars, it’s all about audience size. Twitter’s Periscope may have gotten a sizable head start, launching in April 5 months before Live. It made impressive progress, reaching 10 million signups in August. But it’s still a separate app from Twitter building its own audience while Facebook is baking Live directly into its 1.55 billion user social network. 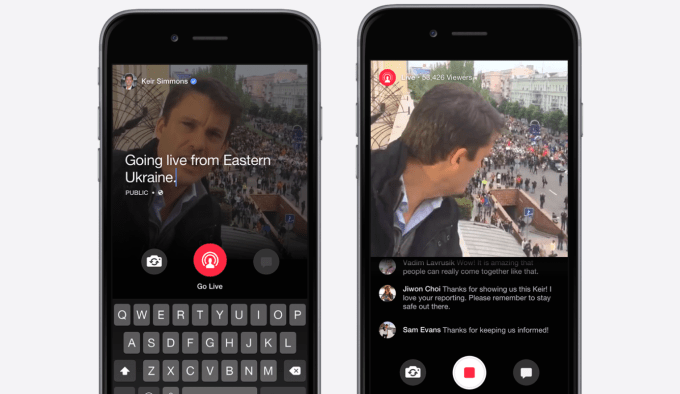 Facebook launched Live as a feature in Mentions, its app for VIPs. At first only celebrities could access it, but in September it was opened to all people with verified profiles, including lots of journalists like me.

The app lets broadcasters quickly start a video stream and read comments in real-time left by viewers. What differentiates Live from Periscope and Meerkat is that streams become recorded videos that live on in the News Feed by default, rather than disappearing instantly on 24 hours later. It’s less ephemeral and goofy for that reason, but the replay videos can garner tons of views after a stream ends, which help convince celebs its worth the effort of going on camera. 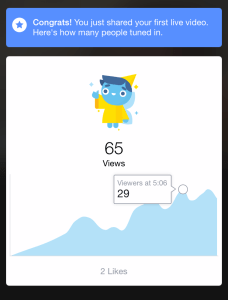 To prove the scale of its audience, Facebook says actor Vin Diesel recently got 1 million live viewers on one of his Live stream, while celebs like Kevin Hart, Ian Somerhalder, and Donald Trump have received over 200,000 live viewers. Facebook is also appealing to celebrities around the world by noting that 60% of its Live broadcasters are outside the US.

Before, Facebook users who’d recently interacted with a public figure who then started a Live stream would get a notification, but now people can actively volunteer to receive these notifications.

Facebook’s likely been more cautious about pummeling users with notifications since Periscope has burned a lot of users by sending too many. Periscope opened broadcasting to all users, not just public figures, leading to a lot of boring, crummy, or super-short test streams.

The low value notifications triggered by these streams have probably led some Periscopers to silence the alerts, which basically defeats the purpose of the app. It’s since added a mute button which helps by letting you turn off alerts but still see someone’s streams in your Periscope feed. If Facebook can strike the right balance between the urgency of Live streaming and being respectful of users’ attention, it could grow Live into a powerful communication medium between celebrities and their followers. That video content helps Facebook masks the lucrative video ads it inserts into the feed while draw big fanbases closer to its social network.