Polling startup Wedgies.com (yes, that’s really its name) is announcing that it has raised $700,000 in seed funding led by Greycroft Partners.

Co-founder and CEO Porter Haney told me the company’s goal is to “legitimize web voting,” and its approach is to bring those polls to social media: “Think about what Gallup or SurveyMonkey would look like if they were starting today.”

For example, the company says The Wall Street Journal used Wedgies to poll readers about things like how many cell phones they use and their response to a speech by President Obama. Apparently Engadget (which, like TechCrunch, is owned by AOL) has used these polls too. Engagement Editor John Colucci told me via email:

I love giving our readers Wedgies (the polls, not anything involving underwear). Sure, the company enables us to pop quick, fun polls on the site and through Twitter, which helps keep my traffic-hungry bosses happy, but more so they get people talking and drive conversations. Last night for example, we found out instantly how upset people were about Sony’s recent decision to cancel ‘The Interview,’ but also realized plenty of our readers appreciate a shirtless Seth Rogen (like I do). 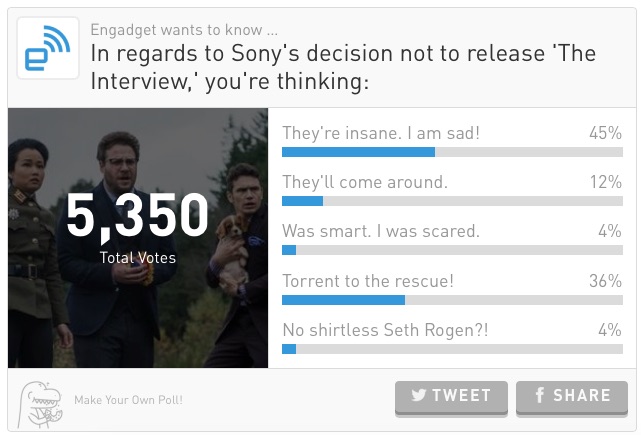 So why are these polling tools the basis for a new company, rather than the next set of features for an established competitor? (SurveyMonkey, by the way, just raised $250 million, in part to fund more acquisitions.) Haney argued that it takes “a lot of work and effort” to build polls that can be answered and shared on social media, rather than just treating those networks as a way to distribute links to a landing page.

Wedgies polls currently work on Facebook, Twitter, and Tumblr, and they can also be embedded on websites and blogs. Haney said his goals for 2015 include building integrations with other platforms like Reddit, Medium, and MailChimp.

Enabling these interactions can lead to truly real-time results, Haney added — it allows, say, sports reporters to get 2,000 or 3,000 reader judgments on a play before the referee comes back with the official call.

As for whether this approach can truly “legitimize” web surveys and give it the weight of a scientific poll, Haney said that by taking advantage of the scale of social media, Wedgies customers can “collect as many responses as possible and then winnow it down to the specific group you’d like to query and get the appropriate group to get scientific results.”

In addition to Greycroft, Tony Hsieh’s Vegas Tech Fund (Wedgies is based in Las Vegas), KBS+ Ventures, and Battle Born Venture also invested in the round, which brings Wedgies’ total funding to $1.2 million.

Oh, and the company name? Apparently the first polls conducted with the platform usually had two possible answers, and “wedgies” refers to the two wedges of the pie chart showing the results.