Just in time for students to head back to school, crowdsourced flash card study platform StudyBlue announced a new site design, search navigation capabilities, a lifelong learning feature, a new pro version of the platform and that co-founder Chris Klundt would be stepping back into the role of CEO today.

Klundt will be taking over for Becky Splitt, who has led the company since 2009. “Becky met me when StudyBlue was just two college dudes in a basement with a bunch of pine needles scattered all over the floor,” says Klundt. He and co-founder Dave Sargeant were apparently buried in their studies and with work at the then small startup and hadn’t taken out a very dead Christmas tree. Klundt realized he was just a kid without much experience at the time and agreed to let Splitt take over while he finished school.

The company has since changed its name from ClassConnection to StudyBlue, grown to 6 million student users, added 250 million study materials, hired a full team of developers, accounting, HR and other things a business tends to acquire as it grows up and it has moved most of the team from Madison, Wis., to Silicon Valley. Klundt stayed with the company but felt Splitt was more capable of handling things at the time. He says he’s grown up alongside StudyBlue and is now ready to regain his former status as CEO. Splitt will stay on as the head of strategic initiatives and will serve as executive chairman of the board.

“The edtech sector is in the midst of  major change,” Klundt tells me. “How will companies in this space not only drive value for users, but also become 100 year-old companies that create value for investors? It’s a big question and something we’ve been tackling internally.” While competitors such as Koofers and other edtech startups in the space like Chegg have branched out beyond initial offerings, Klundt believes StudyBlue will best serve its student audience best by being laser focused on offering just study materials. He says the main thing it was missing was a better way to get those study materials in the right hands on the site.

This is why Klundt says StudyBlue is now launching a new, simpler web design, along with all the other changes today. Klundt rolled out a fresh new site design as his first order of business. “The UI was the biggest thing that needed changing,” he says. “It was stuck in a design from four or five years ago.” The old site was quite clunky and hard to find even basic stuff. It was hard to determine if your search even yielded the materials you were actually looking for. It also looked a bit like old-school Myspace. 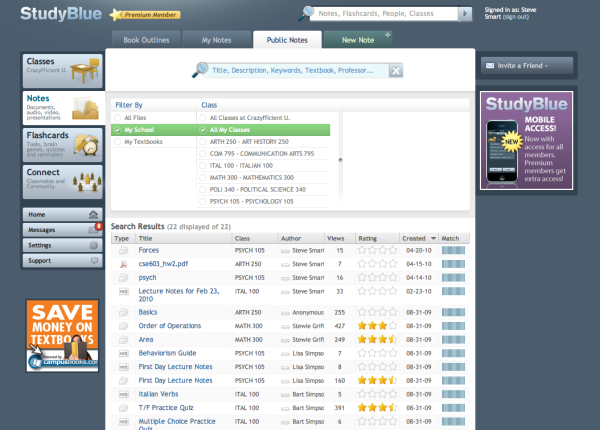 StudyBlue received a “mini” Series A infusion of $1.7 million at the end of  June. Klundt says the funding has been used for a boost in salaries, hiring more people and for the redesign.

The new site is now a lot more Pinterest-like, according to Klundt. There are these deck preview pages now with full illustrations and a much more visual idea, neatly organized in a way that lets the user see what is available to them. 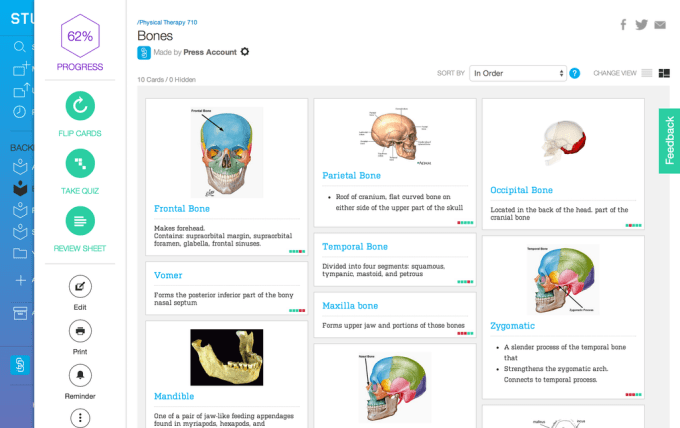 Study-Modes are pretty much unchanged. These include the Flipping Cards (flashcard mode) and Quizzing (auto-generated quizzes that include true-false, multiple choice and fill-in-the-blank). However, StudyBlue now pairs all the related class and textbook materials for a given class (e.g. Econ 101 with Professor Jones at Stanford) so students have access to everything from their classmates in one study guide.

The new search navigation also is easier to find, and it bundles people, classes and the materials tied to them so everything and everyone needed is available at once. Search will also let users filter the library by textbook and author to discover specific study material or information.

The new StudyBlue design is available on desktop, iOS and Android. 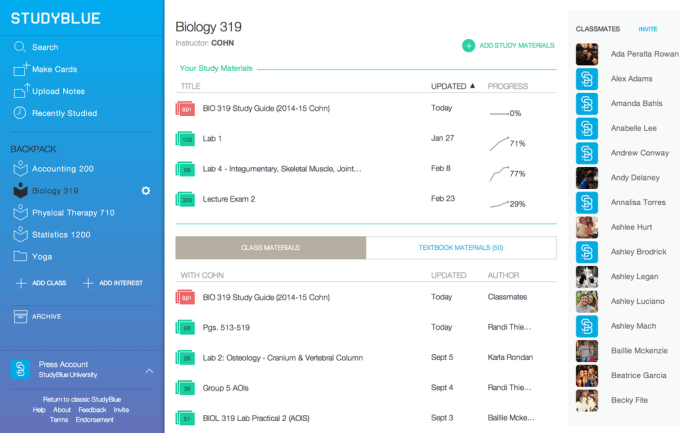 Klundt says the platform has been gaining momentum among lifelong learners lately. StudyBlue now lets these types of learners identify themselves as such and gives them a way to upload notes and other study materials to help them out. These lifelong learners add notes for things such as wine tasting, parachute jump training and even street navigation flashcards for Lyft drivers on the site.

Klundt says this now better serves the growing number of people looking for tools outside of the classroom or to prepare for standardized tests like the GREs or LSATs. 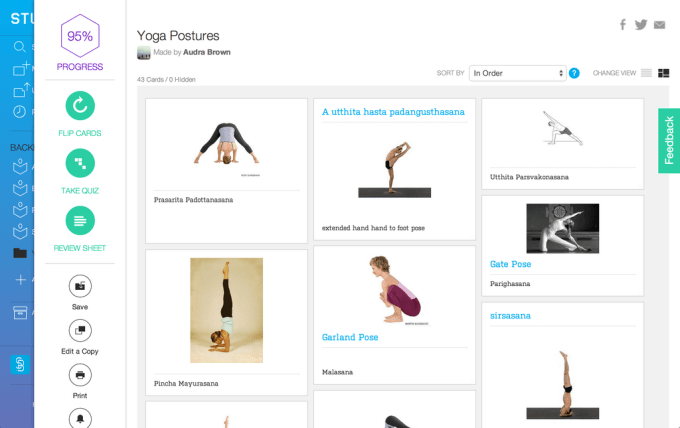 Klundt hints at a Pro offering in the fall. He says this is all part of the new rollout and will give hard-core users of StudyBlue the option to pull unlimited content from the library. This includes groupings of digital notecards, lecture outlines and crowdsourced study guides. Though he also says those not on Pro will be able to purchase the study guides separately.

StudyBlue will introduce the payment option for Pro on September 1st for $9 per month, $24 for three months or $48 for the year. It’s free to new users who opt in until August 31.