Attachments.me, a service that helps Gmail users move their email attachments to the cloud to manage and share them from there, today announced that it has added enterprise cloud storage service Egnyte, which combines cloud and local storage, to its list of supported services. This new integration will allow Attachments.me users to send their attachments directly from Gmail to Egnyte and to share them through Attachments.me. 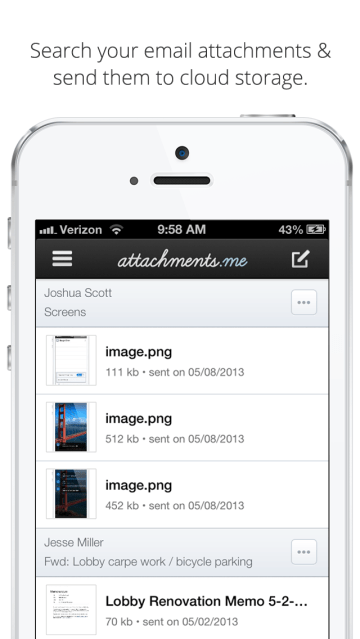 With this, Attachments.me now supports Egnyte, Dropbox, Box, Google Drive and SkyDrive. As Attachments.me CEO Jesse Miller told me, he believes that his company’s sweet spot is in managing the connection between cloud storage and email. Attachments.me started out as a discovery solution for attachments, but the team quickly realized that people want to stop using their inbox as a storage solution, so helping them move their attachments to the cloud – where they are already managing many of their files – was the logical next move.

“Attachments have been a boring backwater of the computer industry, devoid of modernization, yet critical for our day-to-day lives,” Miller said in a statement today.” Our mission is to liberate attachments from outdated systems like email to encourage their development and increase value for the user.”

The company also today launched its updated iPhone app, which now features a streamlined user interface. The app now also allows users to pick multiple files (even if they are hosted on different cloud storage services) and quickly share them with their colleagues. Other new features include a file timeline, content browsing, analytics and support for automatic filing rules.

Clearly, the company is doing something right. According to Miller, the company’s user base grew almost 1100% since last June. Every new storage provider the team added over the last year, he said, brought a new group of users to the service. The company now handles about 130,000 attachments per day and has over 280,000 registered users. For the longest time now, Miller said, Dropbox has been the dominant service for Attachments.me, but Google Drive is starting to catch up. The most active users, however, are on Box.