Mountain View-based startup Tynker is launching a new platform aimed at helping kids of all ages learn to program. Unlike traditional development environments, this introductory step into the world of programming is more about teaching kids how to think like a programmer, than it is about writing out long lines of code  The company has been piloting its curriculum in around 40+ elementary and middle schools in the San Francisco Bay area, and is now becoming publicly available to any school, with plans to support direct sign-up from parents themselves in the near future.

Tynker co-founder and CEO Krishna Vedati, a parent himself, says he was inspired to start the company after being disappointed with the “learn to code” options out there for children today. “My 9-year old son went to a programming camp at Stanford. It cost $1,100,” he tells us. “They make them build a game for two weeks. He comes home and shows the game, but he doesn’t know any basics about how to build a program. That’s the wrong way of learning anything.” 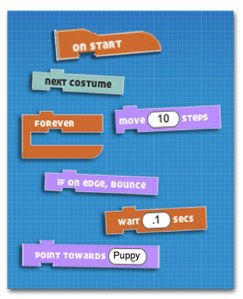 The other problem with current solutions is that they’re not focused on what the kids are actually interested in, Vedati adds. Kids are very visual and creative, and they want to tells stories early on. So Tynker lets them do that by offering things like a character builder to spark their interest. But after they create and costume their princess or zombie (or what have you), Tynker will tell them: “your princess doesn’t know how to talk,” for example.

The kids then learn a basic program for output commands, and afterwards, Tynker will prompt them to teach their character to walk. The student then learn a motion program. By the time they’re done training, they’ve learned twenty primitive programming methods.

And most importantly, none of this involved writing out lines of code.

“What we found is that for Elementary and Middle school students, traditional programming (with syntax) is boring and complex,” explains Vedati. “That is probably why programming hasn’t been introduced to early learners in the past. So to reduce this complexity, we created a ‘visual’ programming language that focuses students on learning to build logic into an application,” he says.

The visual programming “language” in Tynker involves having kids grab visual code blocks which say things like “on start,” “move 10 steps,” “next costume,” “if on edge, bounce,” and more, to give you an idea. They’re the bits and pieces of an animation or game, which, when strung together, can tell a story. 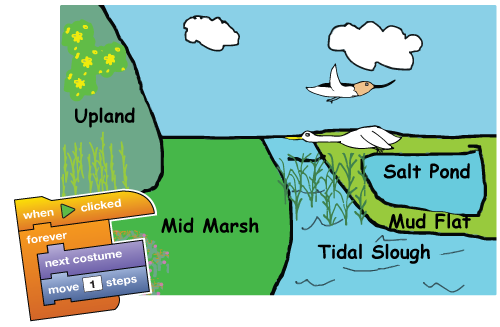 “In this way, [students] learn the logic and structure of programming and can see the results without having to write thousands of lines of code – boring even to some adults,” says Vedati.

During Tynker’s beta trials, it was used in classrooms across the Bay Area to help kids create picture essays on history, geography, nature, games that use physics and math concepts, animations, math-based drawing programs, and more.

Tynker language is similar to Scratch, another popular programming language for beginners. In fact, Tynker even lets its young learners import programs built with Scratch. The language Tynker uses also has features that resemble those in mainstream languages like JavaScript or C, and ships with packs of “stencils” which correlate to the libraries of these real-world languages. 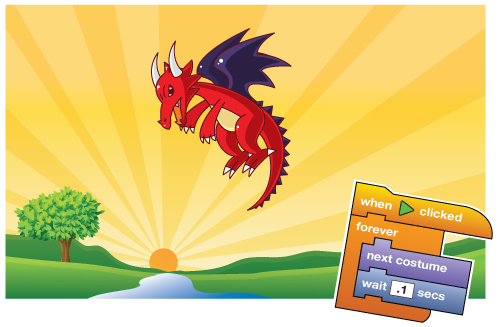 The entire programming environment runs online in the cloud, and includes lesson plans and workflows for teachers. While the core product is free, some things are available as paid add-ons like advanced character studios, advanced lesson plans, and, for schools or districts, assessments.

Later this year, Tynker will introduce the next step up, which will bring Tynker to high schoolers, transitioning them from the visual language to code, which will have them learning JavaScript syntax and Python. It will also allow individual parents or even students to sign-up themselves.