In the post-FM era of streaming music, anyone can be a DJ. Spotify wants to provide the audience. That’s why, industry sources confirm, Spotify will launch an enhanced influencer following system at simultaneous events in New York and London on December 6th. Spotify will start recommending you follow expert listeners, celebrities, and big name artists. It’ll even have a superstar musician on hand at the event(s).

In September I broke the news that Spotify was planning to launch a browser-based version of its desktop software, as well as a total revamp of its discovery system centered around influencers. Seems those are both correct.

Last week The Verge learned that Spotify had just begun testing this new browser version; you can check out my review here. Then in a few weeks at Spotify’s dual “Discover What’s Next” events we’ll get the influencer component. It sounds like a great idea and could give Spotify a leg up on its streaming music competitors and make it more of a sticky social network. As is to be expected, Spotify refused to comment when we asked about all this, but sources confirm the info.

Where Spotify’s At Now

Currently, Spotify’s following system is primarily focused around seeing what your friends listen to. A sidebar ticks off the jams your buddies are hearing right now, and that info gets Open Graphed to Facebook as well. Here’s the problem. If you’re on Spotify, you might already be one of your more music-savvy friends, so they might not be able to help you with discovery. In line with the Weak Tie Theory of sociology, you don’t learn as much from people that are close to you because you have such high overlap in what you both know.

Right now, Spotify does have a basic system to let you follow playlists and drag non-friends to a “Favorites” list so you can check up on them. People certainly seem to like it. Spotify director and tech celeb Sean Parker’s playlist “Hipster International” has over 557,000 subscribers. These people either stumbled onto the playlist after seeing their friends listening to it, or were part of Spotify’s experimental new on-boarding flow that asks people to follow the playlist. So early signs show useres want influencer following, but right now there’s essentially no way to discover these music heads or know which ones you’ll like most. 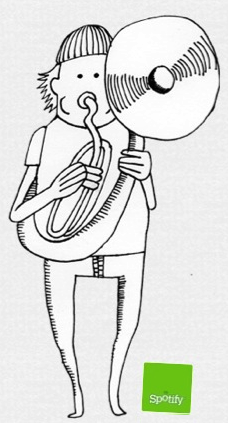 On December 6th, Spotify will reveal its answer to these problems, and here’s how my sources say it’ll work. Spotify will launch an overhauled asymmetrical following system, akin to Twitter. New users will be shown suggestions of people to follow. Those could be musicians they Like on Facebook, people with similar tastes to them, and notable public figures. Spotify will also be aggressively promoting its following suggestions to existing users.

I’ve learned Spotify’s third-party application platform partners will get in the mix, too. There’ll be new and updated apps demoed that assist with showing you who to follow.

The idea is that music experts will update themed playlists, celebs will highlight their favorite new tracks, and artists will curate mixtapes and offer exclusive content to their Spotify followers. It’s a return to a more personal mode of discovery from days of old, when a popular radio DJ or record store clerk would turn you on to hot jams. Both those things are dying off in the digital age, but Spotify thinks that music experts outside your network are still a great portal to discovery.

Spotify’s new following system could unlock the potential of its vast music catalogue. Suddenly you won’t be staring at that infinite search box all by yourself.

Spotify was trying to keep the whole event very secret, and many people we tried talking to refused to spill the beans. One fact I couldn’t find out was who the ultra-famous headliner for the launch event(s) will be.

So separate from all the confirmed news above, I thought I’d take a stab at who might take the stage. If I had to make an educated guess without inside info, it would be one of the mega artists that’s currently not offering their music for streaming on Spotify. The two I keep coming back to are The Beatles and Led Zeppelin. Both have appeal in the U.S. and England where the launch events are happening, and enough members to spread across the pond.

It could certainly be someone less epic. But just Imagine if Paul McCartney and Ringo Starr, or Jimmy Page and Robert Plant came out, announced their bands would now be on Spotify, and that you should follow them for exclusive playlists. That would be something worth trying to keep secret.