We broke news on the official rollout of Facebook’s new mobile share button yesterday. Now it’s available for iOS and Android through app updates that also bring iOS users emoji for Messages, the ability to tag friends in-line in any post or comment. Dedicated emoji messaging apps like Line have won the hearts of mobile users, but now they won’t have to leave Facebook to communicate graphically.

We detailed the Share button yesterday, but it essentially lets you repost links, photos, videos, and public status updates from friends and Pages you Like. You’ll see it to the right of the Like and Comment buttons on news feed posts in the iOS and Android apps as well as the m.facebook.com mobile site.

The Android update is otherwise pretty sparse. Google OS users gain better photo tagging and the option to create an album from photos on Timeline.

iOS users meanwhile get the option to add emoji when writing a Facebook Message or Chat. You can click the + button in the text input field to bring up a menu of about 50 different symbols, from thumbs ups to cheeseburgers, winkey faces to beers. You can still use the default iOS emoji within Facebook Messages by enabling them in your device’s keyboard settings. Android users can use emoji in messages too, but the feature is still missing from the mobile site. 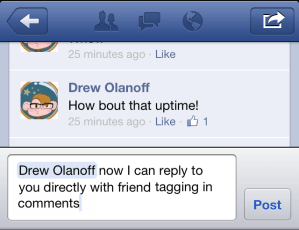 Facebook’s iOS users have long been able to tag friends in posts, but had to append them to the end of the update as “with [Drew Olanoff]”. That made for some funky grammar, or redundancy if you needed to refer to a specific friend in the text of your update. Now you can tag friends in-line so your prose flows.

For the first time, iOS users can tag friends in comments too, which is especially useful for replying to someone else in the thread. Just type the @ symbol and the first letters of a friend’s name to pull up a typeahead of friends to choose from and tag. Both post and comment in-line tagging are available on the mobile site and Android.

One thing noted in today’s iOS release notes was the ability to sort the news feed to see Top Stories or Most Recent through a gear icon in the navigation menu. That was actually added in the November 5th update that also added, but didn’t announce, photo filters. Seems Facebook is playing fast and loose with the What’s New section.

For easy reference, let’s break down the new features and which Facebook apps have them:

You can download the new iOS and Android updates here, or check out the latest version of the Facebook mobile site to try out the new features.