Mobile development firm appMobi is launching a new HTML5-powered browser for iOS on Monday which will bring additional capabilities typically found only in native apps to the mobile Web. The MobiUs Web App Browser, as it’s being called, works both as a standalone browser alternative or in conjunction with Apple’s mobile Safari, similar to the way browser extensions work on the desktop Web.

Although HTML5 can already tap into some of a smartphone’s sensors, like the GPS and accelerometer, for example, appMobi’s MobiUs Web App Browser will go beyond HTML5’s current capabilities to provide access the smartphone’s camera, the ability to scan QR codes and barcodes, support for augmented reality, accelerated graphics, the ability to lock the rotation of the device and more.

The browser integrates two full sets of APIs from both appMobi and from PhoneGap (1.0) to give the Web apps a native look-and-feel, plus the ability to access all the hardware features of the smartphone. Like native apps, the mobile Web apps can work online or off, deliver push notifications and offer in-app purchasing capabilities. AppMobi’s DirectCanvas game acceleration technology is included as well, for optimized HTML5 gaming.

Users won’t have to switch from using Safari as their primary Web browser in order to take advantage of the new functionality, says appMobi. Instead, when a user encounters a webpage that requires the capabilities provided by MobiUs, the Web app in question will prompt you to install the MobiUs iOS app from iTunes. The experience is similar to how online users are prompted to install the Flash plugin to watch online videos. Except in this case, the additional software is not a browser plugin – it’s an app.

After the initial installation, any future Web apps requiring MobiUs’ technology will be able to seamlessly switch over from Safari to MobiUs as need be, without any user intervention. Mobile Web app developers will be able to configure various settings affecting the user experience during the transition, including the customization of the splash screen. And when MobiUs launches, it will be in full-screen mode.

AppMobi knows that, eventually, HTML5 will be able to do what its MobiUs browser is doing today, but those APIs won’t be added to the standard for years. Other solutions, like the HTML5 capabilities chipmaker Qualcomm is working on bringing to mobile, operate lower in the stack than what appMobi offers, and will be provided to OEMs to be sold on new handsets. That’s another way to solve the problem, but on a slower cycle than what appMobi is now doing.

The company had a few developers testing the technology pre-launch, but unfortunately, we couldn’t go hands-on.  It remains to be seen how truly seamless the experience is for the end user or how “native-like” the apps really feel. However, the launch is interesting in terms of its potential to bring that long sought after “write once, run anywhere” ability to Web developers. Now they can write for the desktop, Facebook, iOS and soon, Android, using HTML5, without having to sacrifice so much functionality when porting the codebase to mobile.

The MobiUs app is available here. The Android version will arrive early next year. 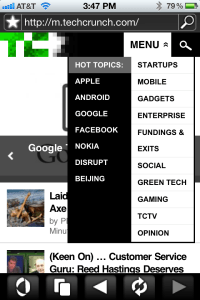