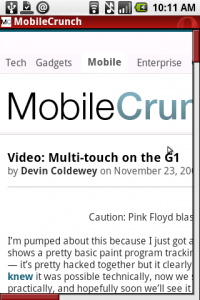 Back in April, Opera released a technical preview of Opera Mini for the Android SDK. The version of the SDK it was developed for was far from the final version, so by the time the G1 was launched in October, the Opera Mini package wouldn’t even make an attempt at installing to the device. Love it or hate it, the G1’s built-in browser has been your only web-perusing option since launch – until today, that is.

While there hadn’t been much indication that Opera had continued pushing forward with Opera Mini on Android since that preview release, they’ve gone and pushed an Android version of the just-released Opera Mini 4.2 to the market.

If you’ve ever used Opera Mini, it’s very much the same beast you’ve grown accustomed to: proxy based page parsing for speedier loading, skinning, bookmark syncing, etc. All seems to work well in our initial testing, though the zooming behavior seems a bit inconsistent: if you zoom in with a click of the scroll ball, move the cursor just a pixel or two, and then hit the “back” button, it returns you to the fullscreen view. If, however, you zoom in, do not move the cursor at all and then hit the “back” button, you’re sent to the last page you visited. As a result, if you accidentally zoom into the wrong spot and try to zoom back out without moving around at all, you’ll find yourself a page away from where you were trying to be.

Is it worth using over the default browser? We’d say so, but as usual when it comes to browsers, it really comes down to personal preference. Either way, it’s worth a whirl – so go nab it from the Android market.