Online storage provider Box.net is announcing today the launch of OpenBox, a platform for developers to integrate their web applications into Box.net.

The platform, once rolled out in full by December 5th, will enable web developers to create “service actions” on Box.net that allow users to easily load their files into 3rd-party web applications. These service actions will also permit users to transfer their files back to Box.net once they have been edited elsewhere. OpenBox is therefore meant to help transform Box.net into an online file system where users can store the data they want to load into various applications on the web. 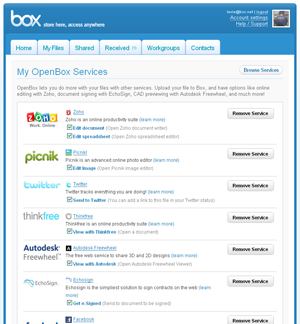 Today’s announcement largely signals the availability of service actions for a handful of web applications: Echosign, eFax, Autodesk, Zoho, ThinkFree, Scribd, Picnik, Zazzle, Mimeo, Twitter, and Myxer. These service actions are options in a dropdown menu that appears when you right-click on file hosted by Box.net. Select “Edit document” to load a file into Zoho, “Publish with Scribd” to send a document to Scribd’s repository, “Edit with Picnik” to edit an image in a graphics program, and so on. Although Box.net has put some hands on time into setting up this original batch of web services, developers will be able to set up their service actions on their own using a point-and-click interface available on December 5th.

Box.net has focused on making OpenBox compatible with existing APIs so that developers won’t need to reconfigure their applications to mesh with it. Just tell OpenBox what type of HTTP request to make (REST, UPLOAD POST, XML, or SOAP) and what parameters to use, and Box.net will connect to your application through your API. If you don’t have an API, however, you need to create some sort of interface for your application to communicate with Box.net.

As with the Facebook platform, services (or “applications” if you prefer) on Box.net will be provided to users in a directory. When services are submitted to OpenBox, they will be manually approved before they hit the directory. Each service will also get its own distinct URL.

OpenBox is not the first initiative that Box.net has taken to open its file storage up to other applications on the web. The company already provides APIs through which other applications can automatically perform functions on your Box.net files (once authorized, of course). Not many service providers have taken advantage of this functionality, however, since users could not propagate their files to other services from within Box.net until now. By providing third parties with a presence within Box.net’s actual website, OpenBox will probably attract many more companies who want to feed off the service’s user base.

More screenshots of OpenBox are provided below.