But first, let’s break down what that means. Anyone can create a social currency, which hundreds of creators have already done via Roll, to change their relationships with fans and users. Roll enables creators to mint and distribute their own social currency under the ERC-20 standard and then determine the ways in which their communities can earn and spend that social currency.

The way I think of it is it’s almost like the process for earning and redeeming credit card points but minus the credit card company and plus the blockchain and creators. I haven’t run this analogy by Miles, but I’m going with it. Just how your credit card provider gives you points for using your card and then you can redeem those points for cash, airline tickets, etc., creators give fans social currency for engaging with their work in a variety of ways. Then, fans can redeem that social currency for more art, content or what have you.

Currently, there are about 300 creators, including Crews, using Roll. Roll, which has $2.7 million in funding from investors like Balaji Srinivasan, Trevor McFedries and others, recently saw its social currency market cap surpass $1 billion. Bradley Miles gifted me .10 $WHALE (worth about $3) so I could get a better understanding of how creators are already using Roll. $WHALE is backed by tangible and rare non-fungible token assets, which means that I can use my $WHALE to buy NFTs. Because Roll enables users to trade their social currency for over 600 other digital assets, that means I could buy the below NFT over on NFT marketplace OpenSea. 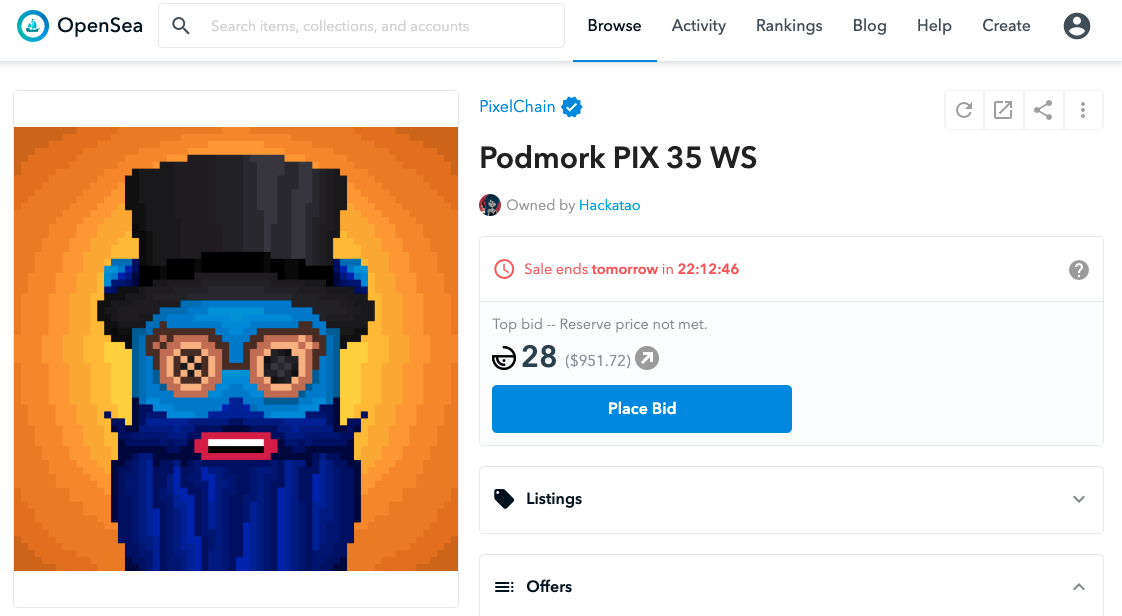 However, you’ll see that the Podmork Pix 35 WS cost 28 $WHALE, so I will not be buying this NFT.

In the case of Crews, he envisions folks earning $POWER via blockchain art purchases, NFTs, physical goods and experiences. Initially, Crews is engaging with his $POWER community through Discord. Folks with 50 $POWER, for example, can access a special channel within Discord. To date, Crews had distributed $POWER to about 100 people, he said.

“If I give you $POWER, you own a piece of me,” Crews said. “There’s no other way to put it. And I want to be very careful about who is holding me, no puns intended.”

It’s still early days for $POWER, but Crews says he eventually wants to offer interest-free microloans to artists. The ultimate goal with $POWER is to empower artists.

“That’s our long-term plan,” Crews said. “To become this thing that this community can live and exist in. You could use it anywhere you are — at Target, the grocery store.”

Crews attributes his interest in this space to something that happened to him about four years ago.

DeFi aims to bridge the gap between blockchains and financial services

While in Milan, Crews said he was trying to buy designer furniture from an artist he respected at Salone del Mobile. He realized he needed extra money to complete the purchase, but didn’t have enough cash in his checking account to cover it. So he got on the phone with American Express, he said, who told him to go to a local bank. American Express, on Crews’ behalf, then tried to explain the situation to the local bank manager so that Crews could get the funds he needed to complete the transaction. Crews said the local bank manager took one look at him and said, “No.”

“And I’m watching all these white men and women pass me in line, and they’re looking at me strangely,” Crews said. “I’d been standing there for 15 minutes and it slowly dawns on me that because I’m Black, I was not going to get my money,” he said. “That was the moment I knew everything had to change for me.”

Crews ended up going to a check-cashing place, in an area where he said his Uber driver refused to go, and got the funds to pay the fees.

“Bringing it up still makes me angry,” he said. “What I love about this new world of finance is that cryptocurrency does not know what race you are, how old you are.”

Through $POWER, Crews hopes to put power back in the hands of artists and creators, Crews explained.

“There’s no gatekeeper to tell us no,” he said.

Crews says he’s also going to start putting out his own content into the $POWER community, where the community will collectively own it together.

For Miles, he envisions a world in which $POWER is accepted at movie theaters or at Paramount Pictures properties.

“[Social currency] is not to replace the dollar,” Miles said. “It’s to complement [money] and do work that probably the dollar is not suited to do.”

I asked Crews if this means he’s leaving Hollywood and will solely focus on producing his own content for his $POWER community. But Crews said he left Hollywood when he sued William Morris Endeavor in 2017 alleging an executive from the firm groped him. Crews and WME settled the suit in 2018.

“And they were done with me,” he said. “But the deal is, is that I had my power. I still had my talent. William Morris threatened to end everything I’m doing. But everything I’m doing right now, you can’t take. So that’s when I separated from Hollywood. I’ve never felt like a Hollywood person, even to this day. But every artist out there probably feels the same way. They want their power.”

The explosive (and inclusive) potential of NFTs in the creative world