Around a third of Americans regularly get their news from Facebook, according to the latest study from Pew Research Center, whose surveys aim to better understand the current media landscape in the U.S. In the updated report, Pew Research found that around half of U.S. adults, or 53%, said they “often” or “sometimes” use social media to get their news. This is spread out across a number of sites, but Facebook is at the top of the list.

The study found that 36% of U.S. adults said they “regularly” access Facebook to get news. This is a significantly larger percentage than almost any other social media platform, with the exception of YouTube, which is used regularly for news by 23% of U.S. adults. 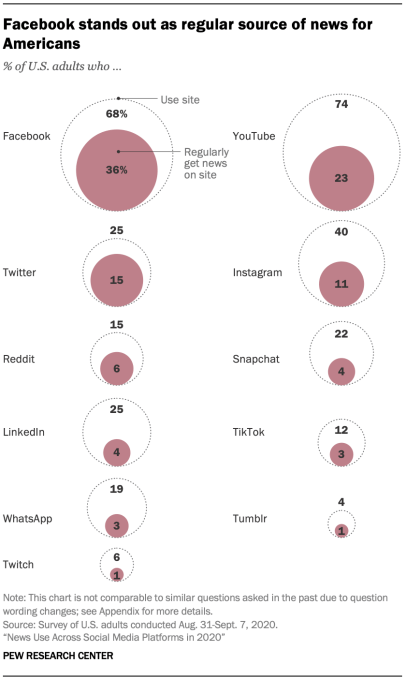 Beyond that, the percentages are much smaller. Even Trump’s preferred platform for communication (well, until recently), Twitter, is only used regularly for news by 15% of U.S. adults, Pew found.

But even if their audiences are smaller, the site’s users may be heavily engaged with the news. Twitter, for instance, is used only by 25% of U.S. adults, but over half the users (59%) say they get news on the platform, compared with 54% of Facebook users. Meanwhile, 42% of Reddit users get news regularly on its site, even though it has a significantly smaller user base than Facebook.

In other words, the list of “top news platforms” looks a bit different when you count how many of a social media site’s own users gets the news regularly from the platform, instead of just how many U.S. adults altogether get their news from the site. 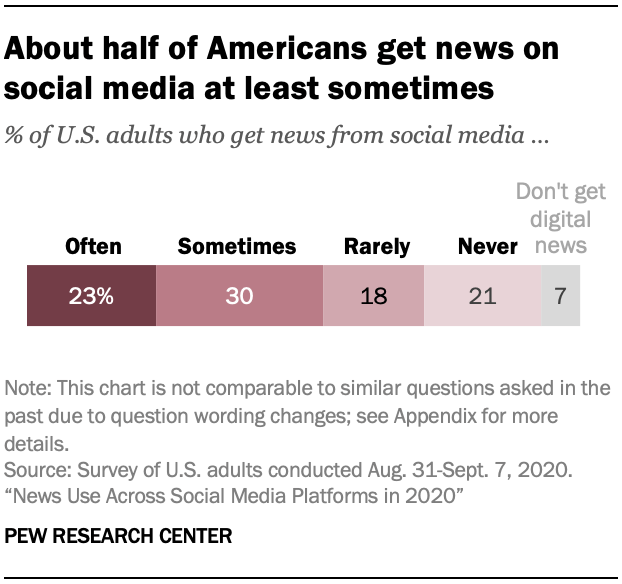 Pew additionally examined the demographic makeup of those who use social media for news, and found that white adults make up the majority of the regular news users for sites like Facebook and Reddit. Both Black and Hispanic adults, meanwhile, made up around a quarter of Instagram’s regular users (22% and 27%, respectively.) Facebook was found to also skew toward women (63% versus 35%) when it came to regularly using it getting the news, while Reddit skews toward men (67% versus 29%).

What’s also interesting about the report’s findings is that, despite Americans’ widespread usage of social media for getting the news, a majority (59%) said they believed it to be “largely inaccurate.” This figure has stayed fairly consistent over the past couple of years, as well. It’s up from 57% in 2018 and the same as on 2019.

Nearly half of social media users also said reading the news on social media has not made much of a difference in helping them to understand current events.

This finding seems to contradict reports and studies that say social media sites — and their algorithms that personalize news to the interests and beliefs of their users — have helped radicalize people online. Last week, the results of that was on full display as a mob of people who have consumed misinformation and conspiracy theories, often for years, stormed the U.S. Capitol in a failed attempt to overturn the results of the 2020 presidential election.

However, keep in mind that Pew’s study is based on self-reported data. So while respondents may have claimed social media posts didn’t really help them “understand” the news, they may be underestimating those posts’ power and influence over time.

The platforms themselves have done little to help prevent the spread of misinformation, beyond adding basic fact-checks. Facebook waited years to ban QAnon groups, but many still remained after the sweep, as did “Stop the Steal” conspiracy groups, after a similar crackdown on the hashtags and other incitements of violence.

The latest report is here.