Late last year, Facebook brought its mobile photo-sharing application Moments to the web in a limited capacity by adding a link to the service in the desktop version of Facebook. We’ve spotted that Facebook also has a standalone web version for the service that offers access to the online albums you’ve previously shared with friends.

However, like the stripped-down version of Moments within Facebook, Moments’ web version is similarly non-functional. While the site displays the full list of albums you’ve created as well as who they’ve been shared with, the common features you’d expect a web version of a photo-sharing app to have simply don’t work.

For example, the buttons for favoriting or commenting on photos don’t work – instead they prompt a pop-up box to appear which directs you to download the Moments mobile application. You can choose to enter in your phone number in this box in order to have the app download link texted to your phone. 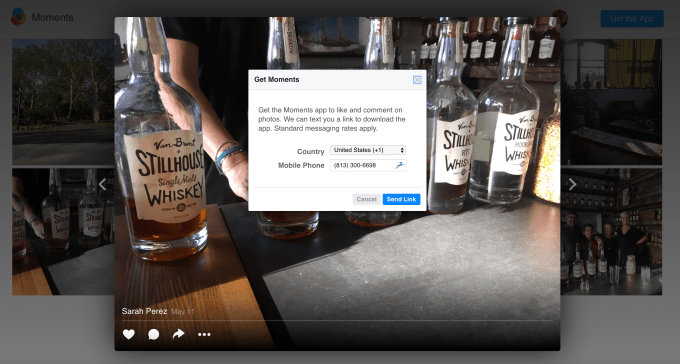 It’s like a marketing site for the mobile app, almost.

Also unavailable on the web version is the ability to work with your photos or albums in any other way – you can create new albums, edit existing albums, or share albums with friends.

That begs the question, of course – why bother have a web version of Moments at all? The answer is fairly simple, as it turns out. It gives a way for people who don’t have the Moments app installed the ability to view the photos you’re sharing with them.

However, not having a fully functioning website may be a misstep for Moments, as it could serve as a means of getting new users interested in the service before committing to yet another mobile app install, and it could increase the engagement from those who are already regular users of the service. After all, expanding to the web is something that’s served other, mobile-first apps well, like Facebook-owned Instagram, for example, and Facebook Messenger. Even Tinder recently debuted a web counterpart.

The existence of Moments, and Facebook’s continued investment in the app, is also more confusing these days, given that the new Stories feature built in to Facebook includes a direct sharing option. That means you can bypass the Moments app entirely in order to privately send photos with a select friend or friends.

The differentiating factor here is that Facebook Stories’ Direct option is meant to be more of a one-off sharing feature, where Moments is about creating albums that can stick around for a longer period of time.

*Update: The web experience launched “pretty recently” Facebook had said, but later corrected this to mean months ago. Whoops! The rollout of the functionality that pre-fills the web experience with users’ Moments content was staged, so some may have had earlier than others.