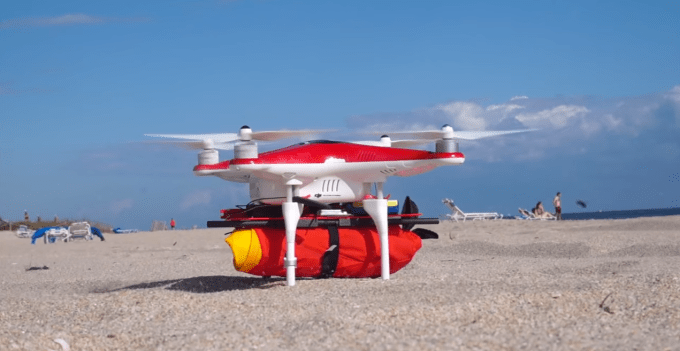 They’ve earned something of a reputation for being buzzy little floating boxes of annoyance and privacy invasion, and the hordes of people unwrapping them this week and subsequently crashing them into the nearest tree/power line/neighbor’s house probably won’t help.

Slowly but surely, though, people are finding truly good, novel uses for them. Stopping rhino poaching! Finding skiers lost in the alps! And now… saving you from drowning?

Called Project Ryptide, this is a self-inflating life preserver ring that snaps onto just about any drone capable of carrying a GoPro. Snap it in, fly your drone out to the person in peril, tap a button, and presto — as soon as the preserver hits the water, a CO2 cartridge dumps its contents and inflates the ring.

Ryptide was built by Bill Piedra with a group of students from the King Low Heywood Thomas private school in Connecticut. They’re hoping to have this thing up on Kickstarter in the new year, with a model compatible with the super popular DJI Phantom drone going for $99.