The baby selfie app signals the “impending collapse of society” – or at least that’s one possible interpretation regarding this thing’s existence, admits the developer of a newly released Android application that’s designed to allow babies to take their first selfies.

The app is, ugh, kind of adorable. It works sort of like a digital game of peek-a-boo, where colorful animals pop up on the screen to capture the baby’s attention, and surprise them. Then, the app plays a sound and automatically captures a photo of the baby.

It’s probably going to be fun that one time you use it, and for 99 cents, it pretty much falls in “why not?” territory.

The app’s creator, Matthew Pegula, is a new dad himself to a six-month old girl, and tells us that he decided to build “Baby Selfie” as an excuse to play with Android development. Currently a software developer at Pittsburgh area studio Deeplocal, Pegula’s background is in iOS development, he says.

“This was a weekend project to get my feet wet with Android development,” he tells us, adding that initially the app was a much more ambitious project involving detecting smiles, and reporting back to the parent what the baby liked and disliked. But he decided instead to release “Baby Selfie” as a first step.

Pegula also admits that “love/hate” is the general reaction to the app, and sort of what he was going for with the whole “selfie” thing. 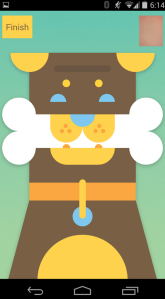 Meanwhile, mainstream media is sort of flipping its lid. For example, the Washington Post, which seems to have taken things entirely too seriously, wrote a scathing review which points out that the American Academy of Pediatrics has advised parents keep kids under the age of two away from screens entirely.

The article also reminds readers that the selfie is “sort of cultural shorthand for a host of alleged millennial problems — narcissism, oversharing, a certain disregard for privacy and personal boundaries,” and therefore should not be encouraged in babies.

The Daily Beast, meanwhile, ponders whether or not parents transferring of their social media “fixations” onto their very young kids is healthy. “…sure, maybe it is modern to pimp out your kid in exchange for likes, but it really can’t be good for either party,” the article proclaims.

(Our headline, it’s case it’s not clear, is just a joke. “Baby Selfie” will actually have little impact on society.)

I think it’s fair to say that the media’s overly negative reactions to this digital toy may have their roots more so in the nature of the “selfie” itself, which is a fairly obnoxious term to describe something that’s actually been a common human behavior since cameras came to be.

As for letting babies play your phone for a couple of minutes…um, lighten up? While I wouldn’t recommend strapping your kid into that Fisher-Price bouncy chair with the iPad attachment for hours on end, a few minutes of snapping your baby’s photo with your phone’s front-facing camera is not exactly the end times.