CompStak‘s data is wildly valuable. Without paying a penny, its crowdsourced real estate info platform has compiled the rent, size, and more of 40% of Manhattan commercial leases over the last decade. It’s selling the data to banks and private equity while trading it to real estate agents and landlords for more data. Now CompStak is getting serious, joining 500 Startups who’s led its $565,000 seed.

The idea behind CompStak is simple, brilliant, and hugely profitable. Co-founder Michael Mandel was a New York real estate broker when he noticed a disturbing lack of transparency in the pricing of offices and commercial spaces. Some agents and firms had small chunks of data but no one was widely collecting lease “comps” — detailed records of rent prices, square-footage, landlords, tenants, and income that buildings brought in.

Mandel knew he could sell the data to help landlords price their space, agents find people whose leases are expiring, brokers negotiate great deals for their clients, and real estate investors know where to put their money. But the innovation came in how CompStak would pull in the data.

Rather than trying to buy it, CompStak seeded its database thanks to some broker friends and set up a barter system, where anyone with access to lease comps could upload them to earn points they could spend to access other comps. That means its data set is snowballing without costing CompStak anything. 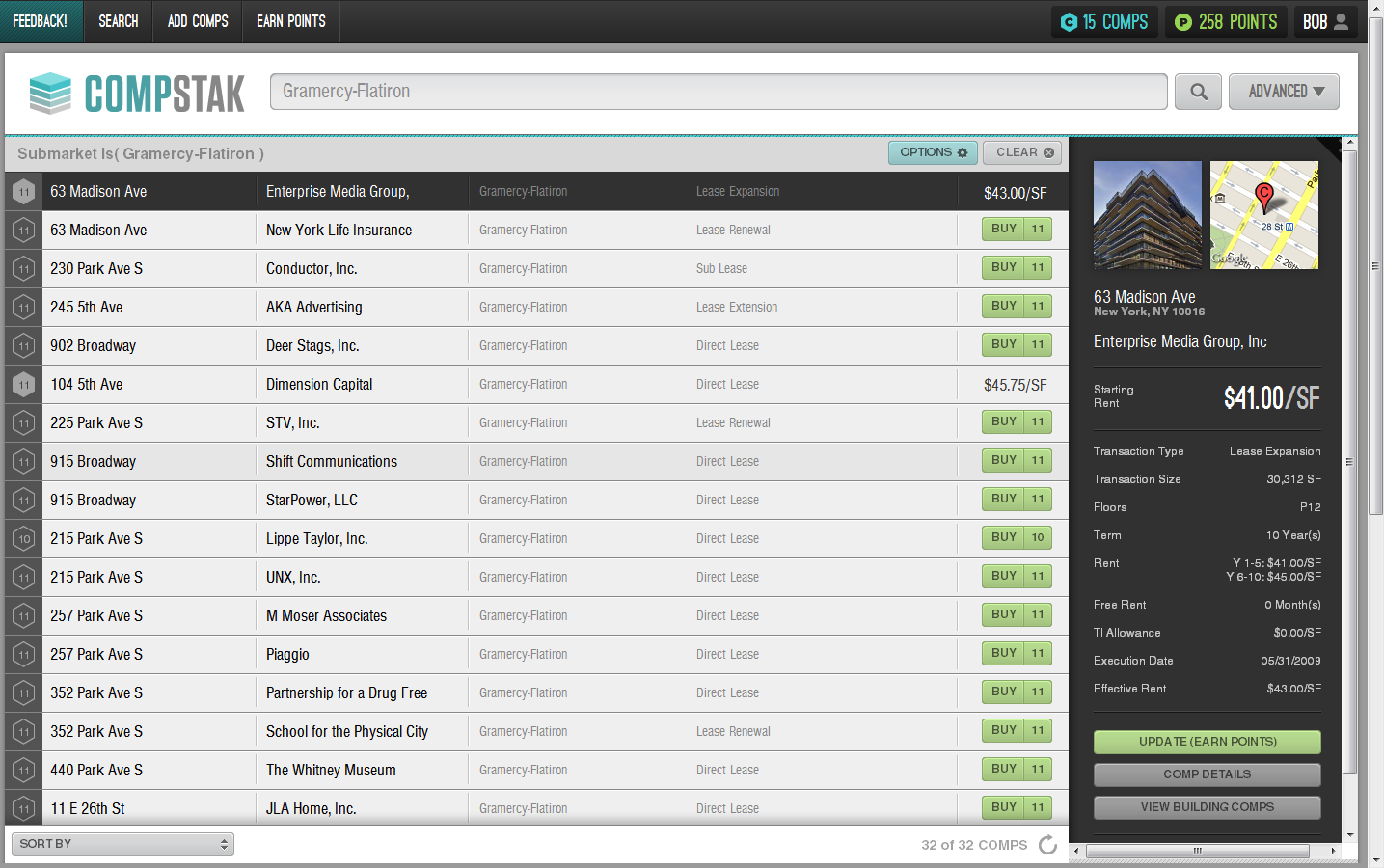 To make money, CompStak sells enterprise licenses to banks, hedge funds, private equity real estate trusts and others that can use it to improve their wheelings and dealings. In a smart move, agents, brokers, and anyone else that control comps can’t buy access — they have to barter. And don’t worry, it’s not competing with real estate search engine and Y Combinator darling 42Floors. The teams are actually friends.

Now CompStak has data for 50% of Manhattan commercial leases in the last two years and 40% of leases in the last 10 years. This data is not in the public record and I hear it’s much better than the smaller collections held by traditional real estate research firms like CoStar. CompStak’s data also illuminates trends in what industries are buying more space, which neighborhoods are trending, and what’s a fair price per square-foot in an area. That’s why it has been cited by the Wall Street Journal, Bloomberg, and industry rag The Real Deal.

CompStak’s got the ball rolling in New York, so it needed money to beef up the crowdsourcing data platform, hire employees, and expand to new cities. To soak up some Silicon Valley wisdom, it’s joined 500 Startups and will set up an office in Mountain View.

First stop in its expansion is likely to be San Francisco, where startups are in fierce competition for stylish office space that can attract talent. But don’t expect to gain personal access to CompStak anytime soon if you’re not in real estate. Mandel tells me “We’re still in closed beta and only bring on people we want to bring on. We don’t have any plans to roll out to the public.”

CompStak has no immediate plans to sell out either, even though acquirers have already come knocking. Makes sense. If I was an old real estate research firm I’d be terrified of CompStak.

Mendel explained to me “We recognize that because what we do is very different, that makes us complementary to many of them. We’ve had interest from other companies and we expect we’ll continue to. But we can gather a ton of info other people can’t. We’re looking to build a formidable company and grow this into something awesome.” Well my advice to CompStak is put the screws to any potential acquirer. If you’re generating massive value and gaining momentum, only sell for an epic price.