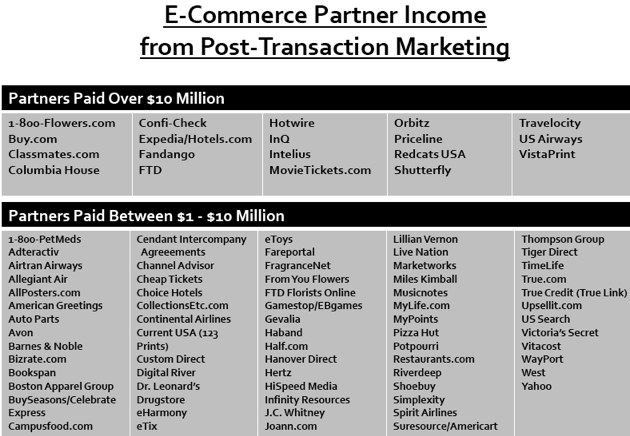 Later today Senator Rockefeller is holding a U.S. Senate Committee on Commerce, Science, and Transportation full committee hearing on Aggressive Sales Tactics on the Internet and their Impact on American Consumers. He released a report on his findings in advance of the hearing.

The documents contain a lot of previously unavailable information on the size of the market, and where the money is flowing.

Background: hundreds of well known ecommerce companies add post transaction marketing offers to consumers immediately after something is purchased on the site. Consumers are usually offered cash back if they just hit a confirmation button. But when they do, their credit card information is automatically passed through to a marketing company that signs them up for a credit card subscription to a package of useless services. The “rebate” is rarely paid.

Intelius is one company that is using these scams to go public. But scores of even more well known ecommerce companies use these scams as well, including: 1800flowers, Buy.com, Classmates.com, Columbia House, Expedia, Hotels.com, Fandango, FTD, Hotwire, MovieTickets.com, Orbitz, Priceline, Shutterfly, Travelocity, US Airways and Vista Print. Each of these companies has received over $10 million in PTM revenue, according to the report. Hundreds more received less.

Affinion, Vertrue, and Webloyalty are the three largest companies partnering on these scams. The report states that these three companies have earned over $1.4 billion in revenue from 35 million transactions. 4 million people are currently enrolled in the plans.

We’ve written that these PTM scams are kissing cousins to the Scamville social gaming scams we reported on earlier this month. As with Scamville, companies that don’t engage in these tactics are at a disadvantage. They earn less revenue, meaning they can’t be as aggressive on core pricing and on advertising. So without regulation, sites that don’t engage in scamming users are forced out into the practice, or out of business.

You can read thousands of comments from people complaining about the scam here. And here’s a video showing exactly how these scams work, and why people click on them:

The report and supporting documents are embedded below.

, Chairman of the U.S. Senate Committee on Commerce, Science, and Transportation