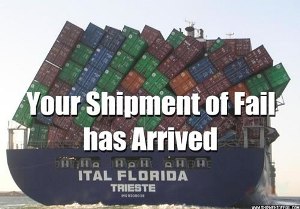 This was supposed to be a glorious day for mobile phone giant Nokia. The Finnish company got out-innovated by Apple a couple of years ago with the introduction and subsequent success of the iPhone and the iTunes App Store, and has been desperately trying to catch up with Cupertino’s disruptive initiatives ever since by launching a couple of new devices on one hand, and consolidating its software & services business on the other hand.

Today sees the worldwide roll-out of Nokia’s Ovi Store, the company’s response to Apple’s App Store (and other centralized content stores for mobile phones and OS’es), and no doubt the company is watching the launch unfold on a global scale with watchful eyes. Here’s the thing: the launch is an utter disaster and I assume (hope) Nokia executives are outraged with the way things are going.

Update: the Ovi team posted a response to the recurring problems, see below.

Since I’ve seen the Nokia Ovi Store website come up a few hours ago, I’ve been trying to browse the selection of apps to select 10 that users should download to start off. I found that the store was down most of the time I was trying to snoop around, pages often didn’t load, and if they did they nearly always did extremely slowly. Despite the fact that I constantly needed to refresh and hope for pages to load, I figured that the service must be getting pounded from all the press it’s getting and was willing to forgive the slowness and regular downtime for the time being. But this has been going on for hours on end now, and there’s no sign of improvement.

It gets worse. Out of the ten applications I recommended earlier today, three suddenly disappeared from the Ovi Store for no obvious reason. Searching for them yields no results, but they do pop up in the ‘related items’ section when you’re browsing alternative applications. Nokia offers no explanation why the content suddenly became unavailable, or if and when they will be back. Meanwhile, some apps are showing up twice (e.g. Qik).

The user experience sucks too. Navigating the online store is downright complicated, and the categories being assigned to certain applications and content are way off at times. Entering basic search queries (e.g. ‘games’) often leads to zero results or a freezing page. Publisher profiles sometimes have nothing but a poorly embedded logo, an extremely short description and no link to their own website (e.g. inTouch).

To add insult to injury, we hear people with an Ovi account are unable to use their credentials for logging on to the new service, but that they are being told that there’s already a profile with their username when they attempt to register for a new account. That means Nokia is basically blocking registered users from using its new service at this point.

Update: All About Symbian lists more problems that need solving.

I’ve contacted Nokia’s press services to give them a chance to respond and detail how heavy the load on their servers has been this morning, but the only conclusion I can make at this point is that the Ovi Store launch is a complete fail on Nokia’s part with a service being rushed out the door before it was ready for prime time.

My advice to Nokia: tell us you’re open for business when you actually are.

Update from the Ovi team:

“Shortly after launching the Ovi Store at 2 am ET, we began experiencing extraordinarily high spikes of traffic that resulted in some performance issues for users accessing store.ovi.com and store.ovi.mobi. We immediately began to address this issue by adding servers, which resulted in intermittent performance improvements. We apologize for any inconvenience this may have caused Ovi Store users and encourage you to continue giving us feedback as we develop the service further.

The Ovi Store device client, however, has continued to perform very well and there were no reported issues from users logged on through that entry point.”