This week Facebook has launched a major new product play, slotting an algorithmic dating service inside its walled garden as if that’s perfectly normal behavior for an ageing social network.

Facebook getting into dating looks very much like a mid-life crisis — as a veteran social network desperately seeks a new strategy to stay relevant in an age when app users have largely moved on from social network ‘lifecasting’ to more bounded forms of sharing, via private messaging and/or friend groups inside dedicated messaging and sharing apps.

The erstwhile Facebook status update has long been usurped by the Snapchat (and now Instagram) Story as the social currency of choice for younger app users. Of course Facebook owns the latter product too, and has mercilessly cloned Stories. But it hardly wants its flagship service to just fade away into the background like the old fart it actually is in Internet age terms.

Not if it can reinvigorate the product with a new purpose — and so we arrive at online dating.

Facebook — or should that be ‘Datebook’ now?! — is starting its dating experiment in Colombia, as its beta market. But the company clearly has ambitious designs on becoming a major global force in the increasingly popular online dating arena — to challenge dedicated longtime players like eHarmony and OkCupid, as well as the newer breed of more specialized dating startups, such as female-led app, Bumble.

Zuckerberg is not trying to compete with online dating behemoth Tinder, though. Which Facebook dismisses as a mere ‘hook up’ app — a sub category it claims it wants nothing to do with.

Rather it’s hoping to build something more along the lines of ‘get together with friends of your friends who’re also into soap carving/competitive dog grooming/extreme ironing’ than, for e.g., the raw spank in the face shock of ‘Bang with Friends‘. (The latter being the experimental startup which tried, some six years ago, to combine Facebook and sex — before eventually exiting to a Singapore-based dating app player, Paktor, never to be heard of again. Or, well, not until Facebook decided to get into the dating game and reminded us all how we lol’d about it.)

Mark Zuckerberg’s company doesn’t want to get into anything smutty, though. Oh no, no, NO! No sex please, we’re Facebook!

Facebook Dating has been carefully positioned to avoid sounding like a sex app. It’s being flogged as a tasteful take on the online dating game, with — for instance — the app explicitly architected not to push existing friends together via suggestive matching (though you’ll just have to hope you don’t end up being algorithmically paired with any exes, which judging by Facebook’s penchant for showing users ‘photo memories’ of past stuff with exes may not pan out so well… ). And no ability to swap photo messages with mutual matches in case, well, something pornographic were to pass through.

Facebook is famously no fan of nudes. Unsurprisingly, then, nor is its buttoned up dating app. Only ‘good, old-fashioned wholesome’ text-based chat-up lines (related to ‘good clean pieces of Facebook content’) here please.

If you feel moved to text an up-front marriage proposal — feeling 100% confident in Facebook’s data scientists’ prowess in reading the social media tea leaves and plucking your future life partner out of the mix — its algorithms will probably smile on that though.

The company’s line is that dating will help fulfil its new mission of encouraging ‘time well spent’ — by helping people forge more meaningful (new) relationships thanks to the power of its network (and the data it sucks out of it).

But that was then. These days, in its mid teens, Facebook wants to be seen as grown up and a bit worth. So its take on dating looks a lot more ‘marriage material’ than ‘casual encounters’. Though, well, products don’t always pan out how their makers intend. So it might need to screw its courage to the sticking place and hope things don’t go south.

From the user perspective, there’s a whole other side here too though. Because given how much baggage inevitably comes with Facebook nowadays, the really burning question is whether any sensible person should be letting Mark Zuckerberg fire cupid’s arrows on their behalf?

He famously couldn’t tell malicious Kremlin propaganda from business as usual social networking like latte photos and baby pics — so what makes you think he’s going to be attuned to the subtle nuances of human chemistry?! 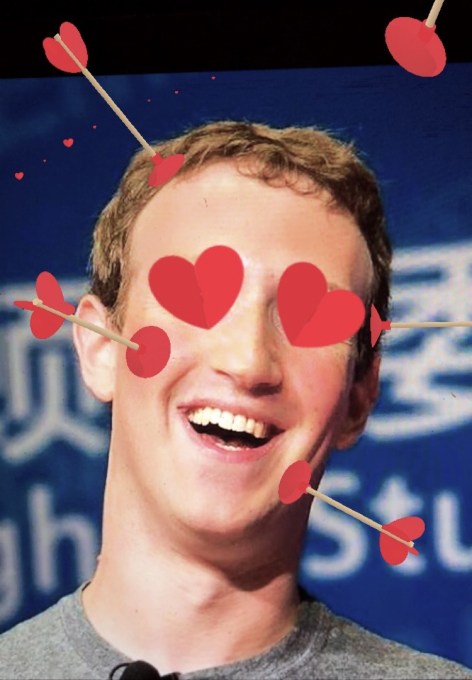