New research released by the U.K.’s telecoms regulator, Ofcom, has flagged up significant growth in social networking among older Internet users — which is helping to offset lower rates of growth across younger age groups.  Ofcom’s latest Adult media uses and attitudes report, which examines 2012 U.K. data, indicates that more than a third (35%) of 55 to 64 year-old Internet users created a social networking profile last year — up by half in just one year (24% in 2011).

Ofcom notes that it’s the only age-group with a “significant increase” in social networking growth but the research also found that a quarter (25%) of Internet users aged 65+ also set up a social network profile last year.

As you might expect, younger  age-groups saw much more marginal growth (see chart below) — doubtless because the majority of those users would be likely to have a social networking profile already. There have also been some suggestions that younger age groups may be becoming less interested in social networking, also fuelled by the rise in usage of alternative messaging and communications apps, such as Snapchat. Lots more older users flocking to mainstream social network sites could further encourage younger users to take more of their chatter elsewhere. 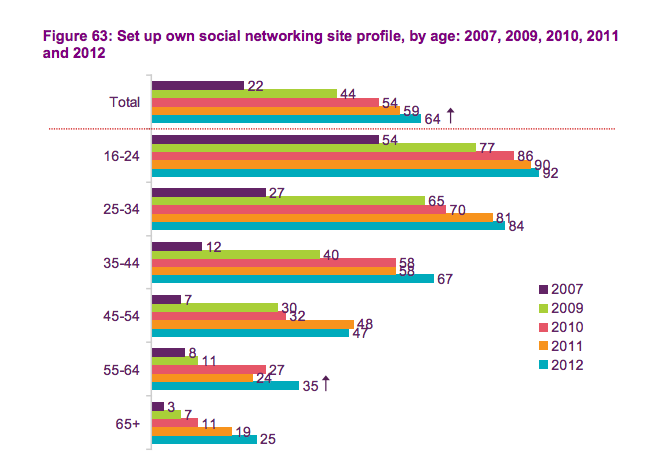 Far from Brits getting tired of social networking, Ofcom found that half of U.K. adults with a social network profile visit it more than once a day, up from a third (35%) who said they did so in 2011. Almost one in ten (9%) is an especially avid user, checking their profile more than ten times a day. Those aged 16-24 are the most likely to fall into the ‘avid’ category — suggesting those younger users who still think Facebook is cool remain heavily engaged with it —  while almost a fifth (17%) said they check for updates more than ten times daily.

It seems likely, though is not specifically noted by Ofcom, that the rise in smartphone usage and mobile social networking is likely to be helping to power frequent daily visits to social networking sites such as Facebook. Research by Flurry earlier this month showed Facebook in particular taking up a big chunk of mobile users’ day. Ofcom’s data found that 16-24s remain the most likely to use a smartphone (86%). 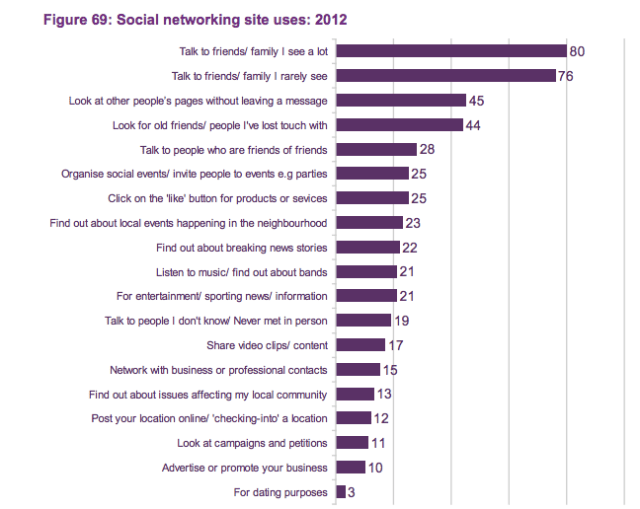