Facebook is far and away the dominant social networking service in the U.S. — used by two-thirds (67 per cent) of online Americans, according to the Pew Internet & American Life Project, vs. a fifth (20 per cent) who use LinkedIn and 16 per cent who use Twitter. But in a new research report, entitled Coming and going on Facebook, Pew shines a light on a sense of dissatisfaction some Facebookers feel towards the network that has caused them to cut back the amount of time spend on the site or abandon it altogether.

Pew’s study found that one in five (20 per cent) online adult Americans, of the 33 per cent who do not currently use Facebook, said they have used it in the past — suggesting they have become so dissatisfied with the experience they have given up on it. The number of respondents in this group was too small to assign percentage proportions to their reasons for abandoning Facebook but Pew lists some direct responses showing a mixed bag of reasons — including:

The research also found that approaching two-thirds (61 per cent) of current Facebook users said that in some time in the past they have taken a voluntary break from the site for a period of several weeks or longer.

Pew was able to break out proportional responses from this group asking why they felt the need to temporarily stop Facebooking, and by far the largest group (around a fifth of those in the category) said they were too busy/didn’t have time for it. The next two most common reasons were disinterest/dislike of Facebook, and people finding it a waste of time/content being irrelevant. The (relative) good news for Facebook here is that concerns about privacy do not appear to be a big motivator for people falling off the Facebook wagon. The (relative) bad news is that a relatively large proportion of users is evidently finding Facebook time-draining, boring or annoying enough to have given it up for weeks at a time — still, despite a sense of dissatisfaction, these people ended up going back for more.

The full breakdown of the Facebook vacationers’ reasons are as follows: 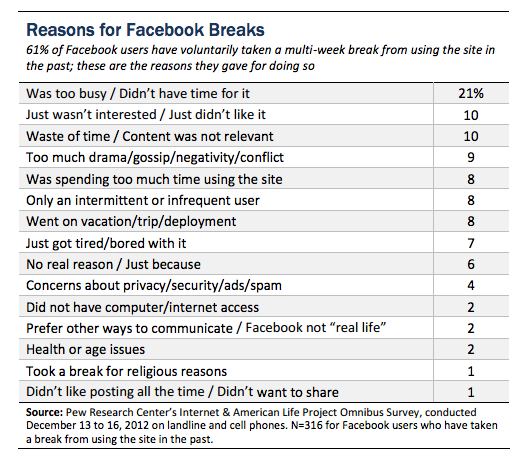 Looking at the demographics who are decreasing their Facebook usage, Pew’s study found that the trend to reduce usage was most pronounced among younger age groups, with approaching half (42 per cent) of users ages 18 to 29 and a third (34 per cent) of those aged 30 to 49 saying the time they spend on Facebook on a typical day has decreased over the last year. This compared to just over a fifth (23 per cent) of users aged 50 and above reporting decreased usage over the same time period.

Facebook usage isn’t all in decline of course. Pew found 12 per cent of Facebook users said the site has become more important to them than it was a year ago, and 13 per cent said the time they have spent on it has increased over the past year. Its data also shows that women are more likely than men to report increased importance and greater time spent on Facebook: 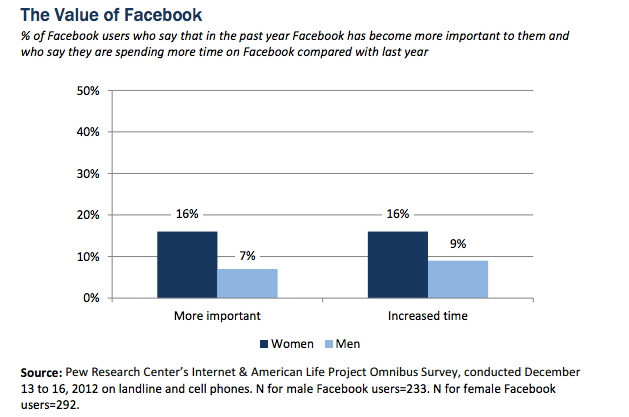 On the crucial question of future Facebook usage, a sizeable majority (69 per cent) said they plan to spend the same amount of time on the site over the coming year — but, worryingly for Mark Zuckerberg, more than a quarter (27 per cent) said they plan to spend less time Facebooking in future. Of course planning and doing are two separate things but the intention to reduce reliance on Facebook should raise a red flag in Menlo Park. Just three per cent of users said they plan to spend more time Facebooking in the next 12 months. Zuck and co will be hoping the new Graph Search feature — which lets users datamine their friends and friendships — winds up ensuring more users spend more time within its walled garden.

Although a majority of users across age groups anticipate their Facebook usage will remain largely stable in the year to come, according to Pew, again Facebook dissatisfaction is strongest among younger users. Pew found that more than a third (38 per cent) of Facebook users aged 18 to 29 expect to spend less time using the site in 2013. And just one per cent of this age-group plan to ramp up their Facebooking. Around a quarter (26 per cent) of 30 to 49 year olds said they intend to spend less time on Facebook in future. 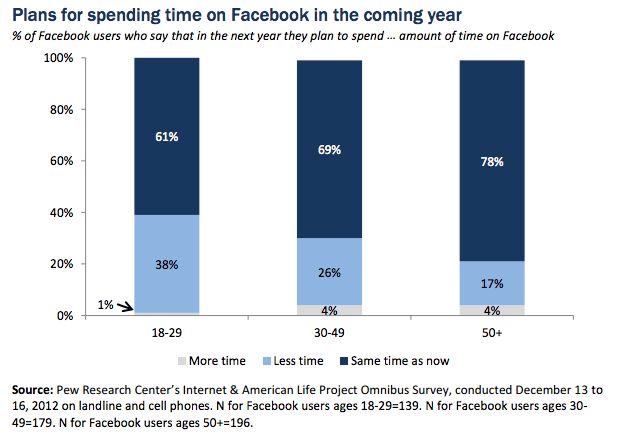 Commenting generally on the research in an emailed statement, Lee Rainie, Director of the Pew Internet Project and co-author of the report, said: “These data show that people are trying to make new calibrations in their life to accommodate new social tools. For some, the central calculation is how they spend their time. For others, it’s more of a social reckoning as they ask themselves, ‘What are my friends doing and thinking and how much does that matter to me?’ They are adding up the pluses and minuses on a kind of networking balance sheet and they are trying to figure out how much they get out of connectivity vs. how much they put into it.”