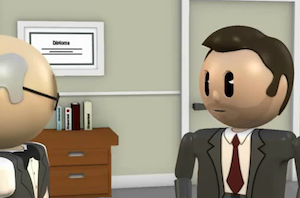 You’ve likely seen the EVO 4G vs. iPhone video. Maybe you’ve seen the follow up. And maybe you’ve read the story about how these videos almost got the guy who made them fired from his job at Best Buy. Well, he’s back with another video. And it’s good.

TweetFired is the story of Peter, a man who gets in trouble with his job because of the tweets he posts. “I can’t believe you would write this bullshit about the company that writes your checks,” his boss tells him.

The only problem? His tweets had nothing to do with his job. Yes, obviously this is a nice big F-You to Best Buy.

“Peter, can you imagine what our stockholders are thinking when they read these?,” his boss says at one point. “You are painting a very negative picture of working her in 140 characters or less.” All of this echoes what Brian Maupin, the creator of these videos, told us Best Buy basically told him before they suspended him. Of course, that was about his YouTube videos, not Twitter — but you get the idea.

When Peter asks how his boss even found the tweets, his boss replies: “I simply cross-referenced your interests on Facebook, checked your favorite hobbies on MySpace, researched your work history on LinkedIn, read your personal diary on Xanga, and then broke into your house in the middle of the night and videotaped you and your wife making love.”

“You do have options here Peter. I could fire you. Or you could kill yourself.” According to Maupin, Best Buy first asked him to quit when they found his videos — he declined. Best Buy eventually offered to reinstate him after reviewing his case — but he also declined that. Probably a good call considering that Paramount Pictures reached out to us the other day looking for his contact info.