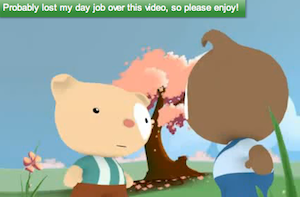 By now it seems like just about everyone has seen the iPhone 4 vs. HTC EVO video (and the rebuttal video). The video portrays an electronics store employee trying to convince a person looking for an iPhone 4 to buy an HTC EVO 4G instead. It’s hilarious — like all good humor, so funny because it’s at least partially true. But you know who didn’t find it funny? Best Buy. How do I know that? Because they’re trying to fire the kid who made it.

The video in question was made by Brian Maupin, a 25-year-old based in Kansas City, Missouri. For the past three and a half years he’s been working at Best Buy selling mobile phones. He’s probably not going to be doing that anymore as Best Buy has suspended him indefinitely and is currently taking the steps to terminate him, Maupin tells us. The reason? The video.

The video became so popular (it currently has nearly 1.3 million views on YouTube) that someone at Best Buy corporate saw it. They then put two-and-two together that it was an employee at one of their stores that made it, and the hammer came down. “They felt it disparaged a brand they carried (iPhone/Apple) as well as the store itself and were fearful of stockholders & customers being turned off to Best Buy Mobile,” Maupin says.

What’s ridiculous is that nowhere in the video does Maupin have anything indicating the fictitious store the iPhone buyer is walking into is a Best Buy. At the beginning, the cartoon employee identifies the store as “Phone Mart.” The character isn’t even wearing the signature Best Buy blue polo shirt — and they’re standing in an outdoor field with a pink tree.

In other words, nothing about this video seems to imply Best Buy in anyway. In fact, the only reason it will be tied to Best Buy now is thanks to this story.

Maupin says he was asked to quit, which he declined to do, and so they suspended him this morning telling him that he would most likely be terminated after they review it with HR. He expects the decision in the next day or two. “I issued a statement to them explaining that the video was intended to be comedic and hence, not taken seriously by them or all these stockholders & customers they are worried about [being] turned off to buying from them due to the video,” Maupin says in his defense.

Maupin isn’t sure how exactly Best Buy corporate knew to tie the video to him, but believes they did so because a couple other videos under his Tiny Watch Productions (a little indie film group he made with his friends) YouTube account featured videos referencing him and Best Buy. Maupin says he removed those videos at Best Buy’s request, but refuses to take down the EVO vs. iPhone videos because, again, they in no way reference Best Buy.

Regardless of whether he keeps his job or not (which he doesn’t expect to), Maupin is optimistic. “I see it all as a blessing in disguise. I’ve wanted to start my career in graphic design/animation for so long, I see this as my kick in the pants to go get it,” he says.

Update: Here’s the latest, Best Buy has decided not to fire Maupin, but he’s not returning to work, he says.

And now, for an encore: