Though TikTok is in the middle of fighting off the Trump administration’s attempt to ban its app in the U.S. over data privacy concerns, the company today is launching a new feature focused on the 2020 U.S. elections. TikTok announced this morning it’s introducing an in-app guide to the elections, which offers its 100 million U.S. users information about the candidates, details about how to vote and educational videos about misinformation, media literacy, the elections process and more.

The company, however, is not producing this content itself. It’s leaving that up to partner organizations, including the National Association of Secretaries of State, BallotReady, SignVote and several others.

BallotReady, for example, will power the elections guide with detailed information about the candidates at the federal, state and local levels, in both English and Spanish. Details about how to vote in every state are offered by National Association of Secretaries of State. MediaWise will provide the educational videos about spotting misinformation and the elections process, as well as how to vote.

The effort will also include resources for voters in different circumstances, TikTok says. This includes information about voting as a person with disabilities, from SignVote; as someone overseas, through the Federal Voting Assistance Program; as a student, with help from Campus Vote Project; and as a person with past convictions, with help from Restore Your Vote.

TikTok will feature this elections guide starting today in the U.S., where it will be accessible both on the TikTok Discover page and on election-related search results. It also will feature the guide at the bottom of videos relating to the elections and on videos posted by verified political candidates, it says.

The company preemptively explains it only verifies accounts to indicate the authenticity of the account ownership, but the verified badge does not indicate TikTok’s endorsement. (The issue around what it means to be verified on a social network is a problem Twitter has faced for years, as it doled out its coveted verified badges to controversial figures, like white nationalists.) 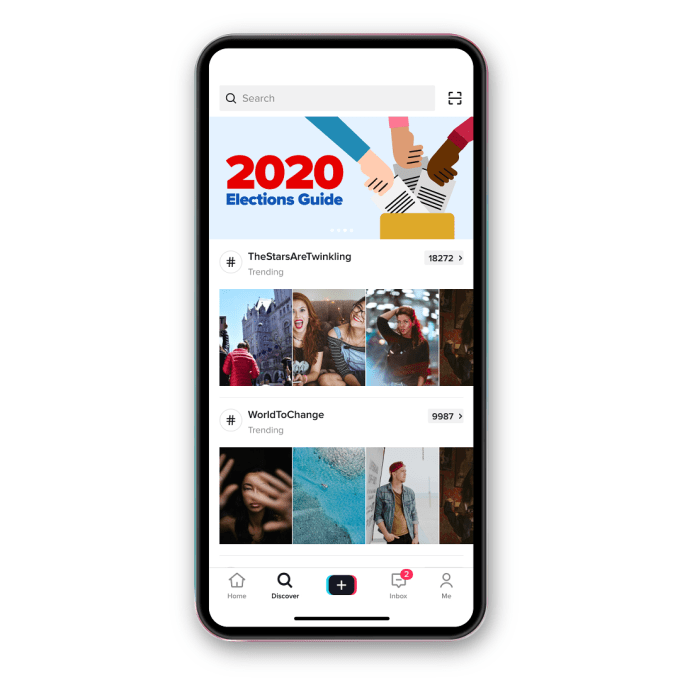 Though TikTok is working with established partners to put its elections guide together, the mere act of involving itself in any way in American politics right now is a fairly bold choice on the company’s part. As users interact with the new elections guide, they could be sharing additional signals about their political leanings.

In theory, these signals could be used to tweak their personalized recommendations, like those shown on TikTok’s For You page, for example. But TikTok could also store this signal data with the user’s TikTok account for future use. That’s not all that different from how Facebook is able to identify your leanings by parsing your profile information or the Pages you’ve “liked.”

TikTok, though, says it won’t be collecting any users’ personal information with the launch of the guide, nor will it use the signals to customize your experience.

“…A user must visit the website for a state or a non-profit for anything that involves sharing their information, including registering to vote,” the company stated, in an announcement. “Interactions with this guide in our app have no bearing on future TikTok experiences, such as recommendations or ads.” 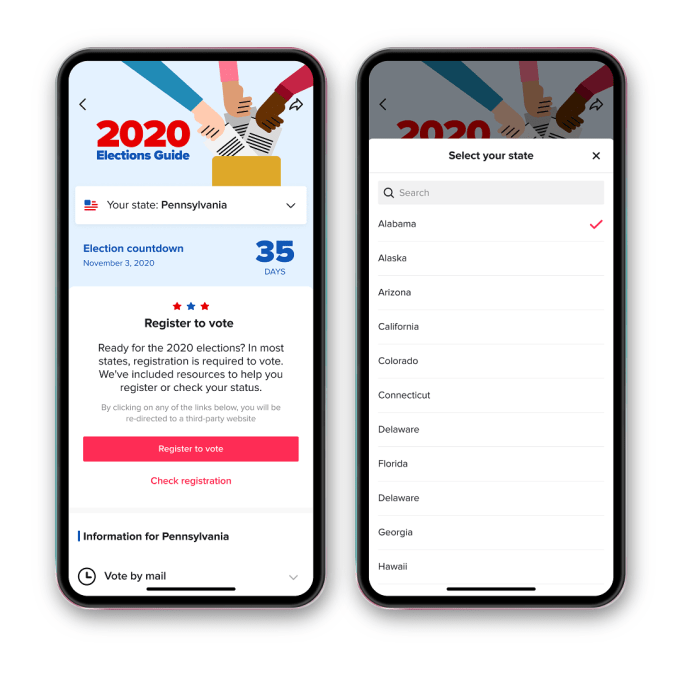 Despite the controversies surrounding TikTok’s ownership, TikTok is joining many social networks that are offering voter guides or running “get out the vote” campaigns in their apps.

Facebook rolled out voting resources to U.S. users this August, and Twitter debuted its Elections hub earlier this month. Snapchat said it helped 400,000 people get registered to vote. YouTube, meanwhile, recently began adding vetted information about mail-in voting to counter misinformation, along with a few features that encourage users to register to vote.

Even Tinder is running a promotion in the U.S. to drive voter registration through the use of in-app cards that direct users to online resources. 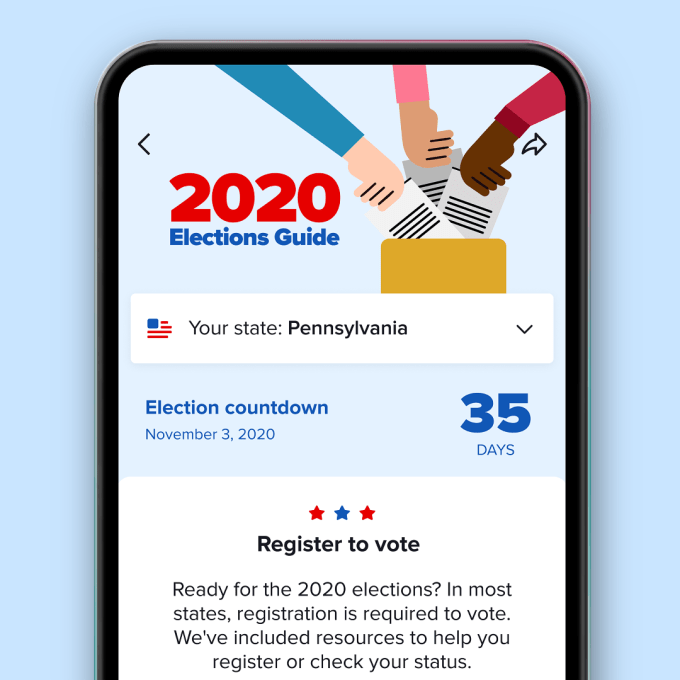 However, TikTok’s voter registration efforts could be impactful because of its younger, Gen Z user base. For decades, youth voters have failed to show up at the polls. And every election year, reports wonder if this year will be any different.

But TikTok users, in particular, have been politically motivated in recent months. Some helped to prank the Trump campaign by registering for tickets to Trump’s Tulsa rally, which they didn’t intend to use. They also trolled the official Trump campaign app to the point that it finally had to reset its App Store ratings. And many went on the app to troll their parents’ political choices.

To what extent TikTok’s young users will transition from being armchair activists to real-world voters — if they’re even of age — remains to be seen. And though news coverage has focused on left-leaning TikToker’s, the app can easily direct you to the pro-Trump bubble where you’ll find plenty of MAGA hat-sporting teens.

Like the rest of the U.S., teens on TikTok have their own political divides. That means even if TikTok is successful in boosting youth voter turnout, there’s no reason to believe it will necessarily help sway the vote one way or the other.