Twitter debuted its election hub on Tuesday, introducing a set of tools to help Americans prepare for the most uncertain election in modern U.S. history.

The platform will add a new “US Elections” tab in the Explore menu, where the trending tab and other curated topic lists live. That tab will serve as Twitter’s central source for hand-picked election news in English and Spanish, debate live streams, state-specific resources and candidate information.

Twitter will also introduce what it’s calling a series of “public service announcements” to educate voters on critical election-related topics. Those PSAs will present information on voter registration, instructions on obtaining a mail-in ballot and suggestions for safe voting as the pandemic continues to rage across the United States.

“Twitter wants to empower every eligible person to vote in the 2020 US election, and we’re focused on helping people register, better understand the voting process during COVID-19 including early voting options, and feel informed about the choices on their ballot,” Twitter Public Policy Director Bridget Coyne and Senior Product Manager Sam Toizer wrote in a blog post on the announcement.

Twitter took a number of measures early on to address concerns around misinformation and platform manipulation around the 2020 election. Unlike Facebook, which has taken more incremental steps, Twitter opted to no longer accept political advertising in a decision made last October. The platform also began aggressively flagging tweets containing election-related misinformation months ago, setting expectations for high-profile serial platform rule-breakers like President Trump. 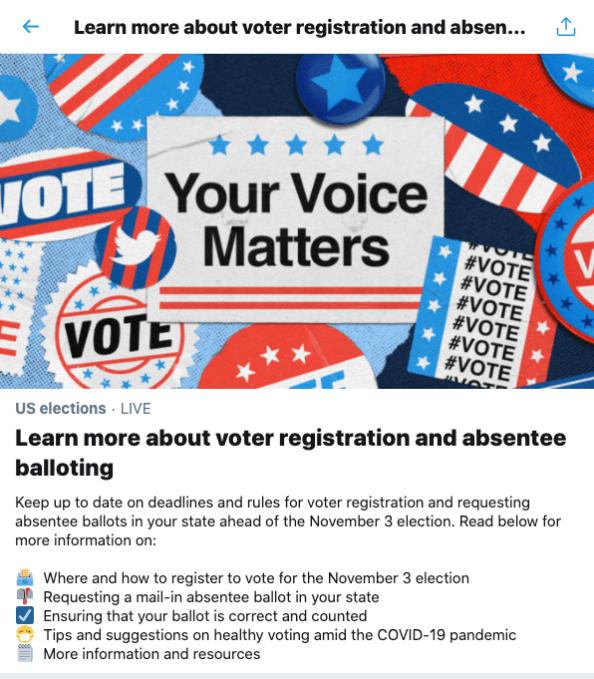 Twitter kicked off a political war with the president in May when the company added a fact-checking label to a pair of his tweets containing false claims about voter registration and mail-in voting security. In the last month and a half alone, Twitter locked the Trump campaign out of its Twitter account for sharing a video with the false claim that children are “almost immune” to COVID-19, hid a tweet from the president that discouraged voting and restricted a handful of tweets from Trump that encouraged Americans to vote twice, which is illegal.

Last week, in a foreboding sign of what Americans might expect from November’s election, Twitter expanded its misinformation rules to address what happens if a candidate declares victory prematurely. In that same update, Twitter also said it would take action against any tweets “inciting unlawful conduct to prevent a peaceful transfer of power or orderly succession.”

While Twitter is far from containing its own misinformation problem, it has shown a proactive willingness to adapt to real concerns around the 2020 election, making policy changes on the fly and adjusting those choices somewhat fluidly as needed. By anticipating worst-case scenarios, Twitter will at least be going into the 2020 U.S. elections with its eyes open — and with so many unknowns in such a tumultuous year, let’s just hope that’s enough.