An effort by TikTok users to troll President Trump’s official campaign app with thousands of one-star reviews appears to have had an impact — if not the impact the pranksters had wanted. In July, Bloomberg reported TikTok activists were flocking to the Official Trump 2020 app on the U.S. App Store to fill it with negative reviews. The prank’s goal was to get the app removed from the App Store by lowering its star rating. The plan was misguided, however, as it’s a common misconception that an app will be pulled from the App Store for having bad reviews. But the trolling has now led the Trump campaign to reset the app’s rating using the infrequently used “reset rating” feature Apple offers app developers.

The prank against the app had begun in retaliation to the Trump administration’s threat to ban TikTok from the U.S. market. Bloomberg reported a TikTok user, Juan Booker, posted a video for his 750,000 followers asking them to go leave one-star ratings on the Trump app to get it booted from the App Store. That post, and then many others like it, began to circulate on TikTok.

But the TikTok users were mistaken. The idea that you can downrate an app to get it removed from the App Store has become a popular urban myth. Apple confirmed to TechCrunch this is not how the App Store works, in reality. It said it will not pull down a one-star app because of its rating.

That doesn’t seem to deter the kids, though. In China, Wuhan schoolkids downrated a remote learning app on the App Store by leaving bad reviews, hoping to avoid virtual school during coronavirus lockdowns. U.S. schoolkids tried the same more recently with Google Classroom, also thanks to a TikTok meme.

In the case of the Trump app, the pranksters left reviews saying the app was glitchy and buggy or stole their personal information. They sometimes shouted out to TikTok in their reviews, as well. 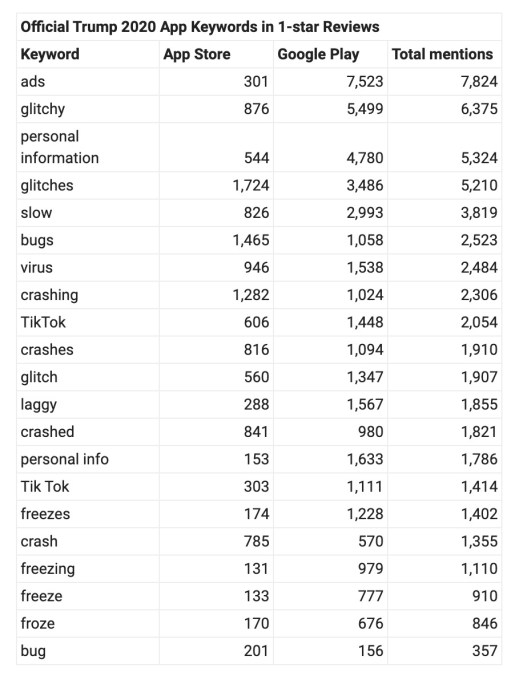 At the time of Bloomberg’s report, the Trump campaign said the TikTok users’ trolling effort hadn’t had any impact on the Trump app. “TikTok users don’t affect anything we do. What we do know is that the Chinese use TikTok to spy on its users,” a Trump campaign director, Tim Murtaugh, told the news outlet.

In reality, the extent of the trolling lowered the Trump app’s rating to the point where the Trump campaign made the decision to wipe out its rating history and start fresh.

Just before Bloomberg’s news report was published, data from app store intelligence firm Sensor Tower shows that the number of ratings for the app had jumped sharply from July 7 to July 9, 2020.

The Trump app’s bad reviews peaked during the week of July 13 when it received  5,383 one-star reviews compared with 896 five-star reviews. The app saw its lowest star rating on July 11, at 1.2 stars.

It appears the trolling picked up again in August, as news of Trump’s executive order to ban TikTok made headlines. On August 10 and 11, the app received 490 one-star reviews versus 59 five-star reviews, for example.

The firm says the Trump app had never before wiped out its rating history. But it did so on August 14, 2020 on the U.S. App Store when it updated to its latest version.

The day before the ratings reset, the app was rated approximately 1.5 stars.

The ratings reset hasn’t seemed to stop the trolling. But as a result of the reset, the trolling no longer has as significant an impact now that all the older negative reviews aren’t being factored into the app’s summary rating.

Typically, app publishers don’t want to reset their app’s summary rating because it means having to remove their app’s lifelong rating history and start over from scratch. It means even the app’s prior good reviews can no longer contribute to the summary rating the app displays on the App Store. The move is considered something of a last resort. It’s what a developer would use if it, for example, had released a buggy update and got slammed with one-star reviews for having a broken app and wanted a second chance with users after the bug was fixed.

Even Apple warns against using the feature unnecessarily. On the Apple Developer website, Apple explains how an app’s summary rating can be reset and when to use it.

“…We recommend using this feature sparingly,” Apple writes. “While resetting the summary rating can ensure that it reflects the most current version of your app — useful if an update addresses users’ previous concerns — having few ratings may discourage potential users from downloading your app. In addition, keep in mind that resetting your summary rating does not reset your app’s written reviews. Past reviews will continue to display on your product page,” Apple website says.

Of course, the Trump campaign isn’t likely concerned its official app won’t have enough ratings to confer legitimacy. It doesn’t have other apps also pretending to be the “real” version — a problem some other App Store publishers face. App publishers who are typically concerned with retaining their rating history are those aiming to give potential users an assurance that their app has been around for a long time and that it has a large user base, based on the number of reviews.

When the rating is reset, the ratings count starts at zero. This can sometimes be seen as a popularity metric, however, so Trump’s campaign probably didn’t pull the kill switch without some consideration.

This isn’t the first time TikTok users have tried to prank the Trump campaign. Thousands of TikTok users, along with K-pop fans, registered for tickets to Trump’s Tulsa rally in an effort to take away seats from Trump supporters. When it appeared the rally was under-attended, TikTok users and other online activists claimed credit. The Trump campaign disputed this, saying it had already weeded out tens of thousands of bogus phone numbers that were used for fake registrations.

While the results of these online pranks may not have the effect they intend, it’s worth noting what TikTok users are capable of achieving when their ideas go viral in the very app Trump is looking to ban. One wonders, though, if the TikTok pranksters of age will take their activism to the polls later this year.

The Trump campaign didn’t reply to requests for comment.