Eager to avoid a repeat of its disastrous role as a super-spreader of misinformation during the 2016 election cycle, Facebook is getting its ducks in a row.

Following an announcement earlier this summer, the company is now launching a voting information hub that will centralize election resources for U.S. users and ideally inoculate at least some of them against the platform’s ongoing misinformation epidemic.

The voting information center will appear in the menu on both Facebook and Instagram. As part of the same effort, Facebook will also target U.S. users with notifications based on location and age, displaying relevant information about voting in their state. The info center will help users check their state-specific vote-by-mail options, request mail-in ballots and provide voting-related deadlines. 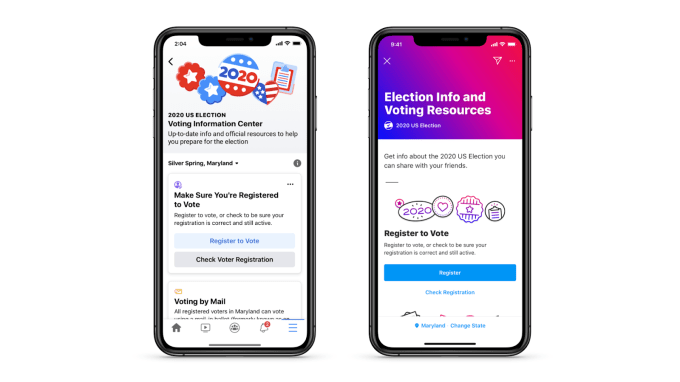 Facebook is also expanding the labels it uses to attach verified election resources to posts by political figures. The labels will now appear on voting-related posts from all users across its main platform and Instagram, a way for the platform to avoid taking actions against specific political figures while still directing its users toward verified information about U.S. elections.

Along with other facets of its pre-election push, Facebook will roll previously-announced “voting alerts,” a feature that will allow state election officials to communicate election-related updates to users through the platform. “This will be increasingly critical as we get closer to the election, with potential late-breaking changes to the voting process that could impact voters,” Facebook Vice President of Product Management and Social Impact Naomi Gleit wrote in a blog post about the feature. According to the company, voting alerts will only be available to government accounts and not personal pages belonging to state or local election administrators.

The company cites the complexity of conducting state elections in the midst of the pandemic in its decision to launch the info center, which is also modeled after the COVID-19 info center that it created in the early days of the crisis. While the COVID-19 info hub initially appeared at the top of users’ Facebook feeds, it’s now only surfaced in searches related to the virus.

Uncomfortable as it is with the idea, Facebook seems to be aware that it could very well become the “arbiter of truth” on election night. With 2020’s unprecedented circumstances leading to a record number of ballots cast through the mail, it’s possible that the election’s outcome could be delayed or otherwise confusing. Without clear cut results, conspiracy theories, opportunism and other forms of misinformation are likely to explode on social platforms — a nightmare scenario that social networks seem to be preemptively dreading.

“A prolonged ballot process has the potential to be exploited in order to sow distrust in the election outcome,” Gleit wrote in Facebook’s post detailing the election tools.

The company was one of nine tech companies that met with federal officials on Wednesday to discuss how they will handle concerns around misinformation on the platforms around election day.

Joint industry statement on ongoing election security collaboration between tech companies and USG agencies tasked with protecting the integrity of the election pic.twitter.com/c1fHERHWtw

The group of companies now includes Facebook, Google, Reddit, Twitter, Microsoft, Pinterest, Verizon Media, LinkedIn and the Wikimedia Foundation. Some of the group’s members had met previously to discuss efforts ahead of U.S. elections, but the expanded coalition of companies formally working with federal officials to prepare for the U.S. election appears to be new.