How iOS 14 and Apple’s other new plans impact apps

At Apple’s hardware event this week, the company announced a new Apple Watch Series 6, an Apple Watch SE, an eighth-generation iPad and a new iPad Air, among other things.

But the bigger news for app makers was the surprise release of iOS 14. Typically, developers are given a much longer heads-up and at least have the updated version of their developer tools well before the actual iOS launch day. This year, however, Apple shocked app developers with an announcement during its live event that its new software platforms, iOS 14, iPadOS 14, watchOS 7 and tvOS 14, would arrive in less than 24 hours.

The move was a low blow from Apple at a time when its developer community was already feeling disrespected by Apple’s tougher stance on the use of in-app purchases and increase in capricious app rejections, not to mention the language Apple used to describe their contributions to iPhone’s success in Apple’s lawsuit with Epic Games.

But now iOS 14 is here, and with it comes a radical change to how apps are presented and used on iPhone.

App Clips will allow users to launch “mini app” experiences when a full app download isn’t needed, like in the case of needing to pay at a parking meter using a native app. Widgets will allow developers to increase their presence on the home screen, potentially increasing their importance to their most loyal users. But on the flip side, infrequently used apps may now be abandoned in the new App Library.

Any app that doesn’t get a home screen spot in the new version of iOS either as an app icon or widget may soon find that its MAUs and DAUs decline after users upgrade to iOS 14.

Being relegated to the App Library is the equivalent of being stuck inside a folder on the back screen — out of sight and forgotten. App developers who suspect they haven’t made the cut in the big iOS redesign will need to make clever use of push notifications to rekindle their relationship with users. But this, too, is a fine line. Too many notifications or pushing low-value notifications will see users turning to other iOS tools — like the option to easily silence or switch off notifications entirely for the app in question. And then, without any visibility or a way to connect, the app will be truly forgotten.

Apple also challenged the entire fitness app industry with its launch of a Fitness+ subscription service. Wall Street investors weren’t too worried about the long-term potential impact to top brands, like Peloton and Fitbit. But these companies are not necessarily representative of the smaller fitness app maker. For $10 per month or just $80 per year, Apple is offering a home gym membership of sorts, with deep integrations with Apple Watch. Fitness+ offers workouts and instructions set to music that can be used across Apple devices. Because it’s from Apple, the workouts will also correctly sync to the Apple Watch for accurate recording of various workout metrics, like calories burned, pace or distance, for example.

The fitness market doesn’t seem too scared by Apple Fitness+

The service is also being bundled in Apple’s new Apple One subscription in the upper tier, which may appeal to Apple’s current subscribers looking to save money by paying for an all-in-one service instead of individual apps. And what could a fitness app maker do to compete with this? Or a music app, for that matter? Third-parties don’t typically have the option to get bundled into a high-value package alongside other top apps from unrelated industries, unless the company goes out and forges those deals itself — like Spotify once did with Hulu.

Given that Apple is still being investigated over antitrust issues, it’s rather bold to launch a bundle deal like this while continuing to commission its competitors — rivals who have no other means of reaching iPhone’s audience outside the App Store.

Apple One bundles iCloud, Music, TV+, Arcade, News+ and Fitness+ for $30 a month

Kids get to use Apple Watch’s key features, like Emergency SOS, Maps, Siri, Alarms, Memoji, Apple Pay, and more, while parents get to restrict who the child can call or text. By the time the child upgrades to iPhone and the wider world of apps that comes with it, families may see no need for a third-party alternative for family safety. That means kid trackers will need to upgrade their offerings to include features that Apple doesn’t, like Life360 does with its driving features, like crash detection or weekly driver reports, for instance.

Continuing chaos around the TikTok ban

There is nothing straightforward about the TikTok ban. Like much of the Executive Order activity coming from the current administration, a broad order is issued but the details are left to be worked out on the fly, leading to chaos.

In the case of the TikTok deal and the app’s potential ban in the U.S., at the beginning of this week we learned China would rather see TikTok banned than forced into a sale, and that neither Oracle nor Microsoft would get to acquire TikTok’s U.S. business. Microsoft was said to have apparently pissed off TikTok owner ByteDance by calling the app a security risk and was cut out of the deal. Later in the week, Oracle put out a press release saying it would be the technology partner for TikTok, and Walmart separately claimed to still be involved.

Oh, and it seems Instagram founder and former CEO Kevin Systrom was approached for the TikTok CEO job at one point. Lord.

So what’s happening now? The U.S. government and ByteDance continue to negotiate on specific terms. As of late, the U.S. wants Oracle to agree to review TikTok source code for backdoors, ByteDance to create a new organization for its U.S. operations with a board approved by the U.S. government and for there to be a license agreement for TikTok’s algorithms. As TechCrunch reported, these terms beg the question as to how TikTok could possibly continue to refine its algorithms in real time without access to U.S. TikTok user data, or when it has to rebuild its infrastructure on Oracle, separated from a core product being developed elsewhere. But nevertheless, reports claim ByteDance has agreed to the government’s terms and also plans to IPO TikTok’s global business.

On Friday, the Commerce Dept. announced the details of how it plans to enforce a shutdown, saying that both TikTok and WeChat, the other Chinese app impacted by the ban, would no longer be distributed on U.S. app stores as of September 20. But TikTok gets an extension that allows it to still operate until November 12 as the parties attempt to hammer out the complicated deal. That deadline means the app will continue to work through the U.S. elections, based on how the terms are spelled out now. But those could change at any time, given the chaotic nature of how this potential ban has progressed so far.

Despite being one of TikTok’s chief rivals, Instagram — which recently copied TikTok with its own feature, Reels — has come out against the ban. Instagram head Adam Mosseri said a U.S. ban of the app would be bad for the internet more broadly, including companies like Facebook and Instagram. TikTok interim CEO  Vanessa Pappas then publicly asked him for help with its litigation.

We agree that this type of ban would be bad for the industry. We invite Facebook and Instagram to publicly join our challenge and support our litigation. This is a moment to put aside our competition and focus on core principles like freedom of expression and due process of law.

By the time you read this, several more updates about the TikTok deal may have been released. Stay tuned.

Aviary’s recently launched Twitter app ($4.99) is ready for iOS 14, with home screen widgets and support for multiple columns on iPad. 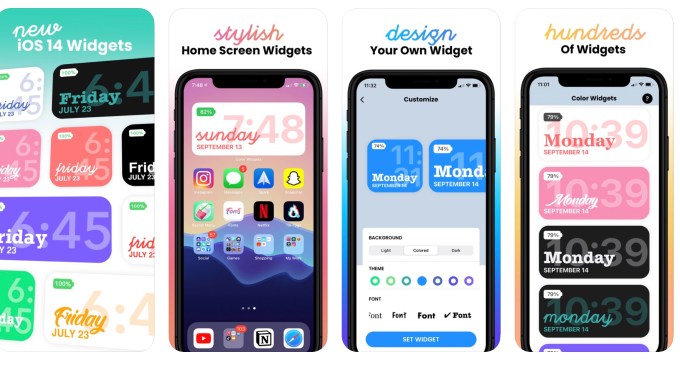 A simple app is No. 1 on the (non-game) App Store because, clearly, iOS users were ready for widgets. The Color Widgets app lets you pick a color, font and theme for a basic widget that displays the date, day of the week, time and battery level. Isn’t that pretty?