U.S. challenger bank Chime, now valued at $5.8 billion, is entering the credit card market with today’s launch of a new card designed to help consumers build their credit history by way of everyday transactions. With the Chime Credit Builder Visa Credit Card, users can control how much they want to spend by transferring funds from a “Spending Account” to their Credit Builder Secured Account, and can then charge up to this amount wherever Visa is accepted.

This makes the card feel more like a debit card, as it’s tied to how much cash is in a user’s bank account — rather than a traditional credit card that can allow for overspending.

Chime wanted to develop a new kind of credit card experience due the growing popularity of debit cards in the U.S. In 2018, the U.S. Federal Reserve said debit cards represent 50% of all noncash transactions, the company noted. Younger consumers, in particular, prefer debit over credit, Chime had reported in the past. In a 2015 survey, Chime found that 67% of millennials preferred debit cards, which they feel are more secure and less likely to get them into debt.

However, relying on debit cards alone means younger consumers aren’t building up their credit history — a decision that will come to matter when it’s time to finance a larger purchase, like a house.

“Americans have embraced debit cards for greater control but this limits their ability to establish or build their credit score,” noted Chime CEO Chris Britt, in a launch announcement. “We created Credit Builder to help our members stay in control and safely build their credit with their everyday purchases,” he said.

Chime’s credit card aims to straddle both worlds, debit and credit, by working to establish good credit while also preventing users from overspending.

To make this work, Chime users first add money to their Chime Spending Account and then charge their everyday purchases — like gas, groceries or subscriptions — using the credit card. At the end of the month, Chime’s Safer Credit Builder feature will automatically pay off the credit card balance from the secured account on time. It then reports the credit card payment to the major credit bureaus, including TransUnion, Experian and Equifax.

The card also has the appeal of a debit card for its lack of fees. It doesn’t include an annual fee, interest or a minimum security deposit, like many of the secured credit cards it competes with. 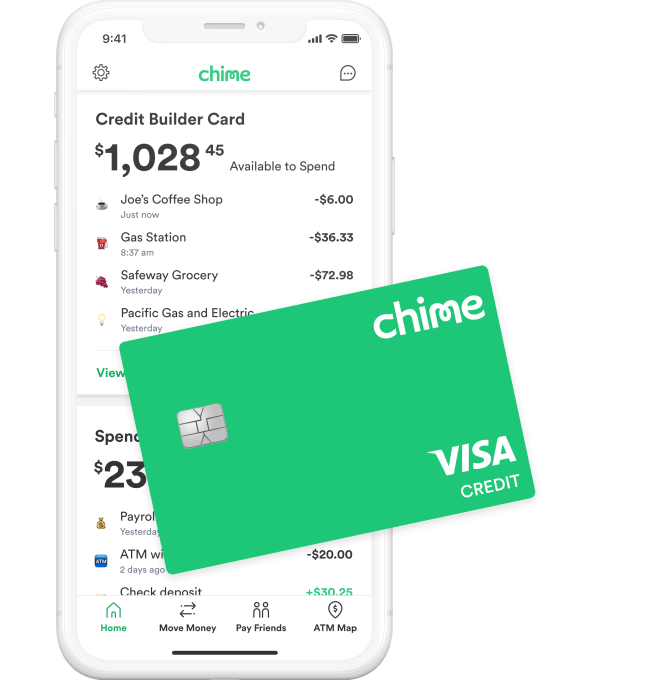 The company has been thinking about how to better address the credit building needs of its users for some time. In fall 2018, Chime acquired the credit score improvement service Pinch, which had focused on helping young adults build better credit. The startup was best known for a service called PinchRent, which reported on-time rent payments to credit bureaus to help its users increase credit scores.

Chime says it took learnings from Pinch and tapped into the team’s expertise in its creation of Credit Builder.

Chime has been beta testing Credit Builder since June 2019 and the service has grown to reach over 200,000 enrollees. During the test period Credit Builder has helped users increase their credit score by an average of 30 points, Chime says, citing data from Transunion. In addition, it helped 95% of members with no credit history establish a credit score for the first time. Anecdotal reports from its users, like these discussions on Reddit, also appear to support Chime’s statements about the card’s ability to improve their credit.

Today, Chime is opening up access to the waitlist for Credit Builder to all its Chime banking customers and it will roll out the service to more members every week over the summer.

Chime’s mobile banking app is now one of many challenger banks in the U.S. aiming to address a younger generation’s shift away from big banks with physical branches to modern, mobile and digital banking experiences. Chime, however, is not a bank itself. Instead, banking services are provided by The Bancorp Bank or Stride Bank, N.A. The Credit Builder card is also issued by Stride Bank.

Like many of its rivals, Chime offers free checking accounts, with no overdraft fees, early access to direct deposit paychecks, automatic savings and more. But Chime has outpaced much of its competition, having raised a $500 million round in late 2019 to value its business at $5.8 billion — a sizable increase from the $1.5 billion valuation it had earlier in 2019. It’s now growing at 4x year-over-year, the company says, and reached 8 million FDIC-insured accounts as of February 2020 according to Bloomberg.

Chime’s Credit Builder launch follows yesterday’s debut of the Apple Card “Path” program, which also helps to tackle the issue of young people who can’t quality for credit. In its case, the program alerts users to ways to improve their creditworthiness, like making payments to secured cards or resolving past due balances. This program is more educational in nature, however, whereas Chime’s Credit Builder is about actual credit building through transactions and payments.

Correction, 6/30/20, 3 pm et: The account users spend from via the credit card is called the “Credit Builder Secured Account.” We’ve updated the article with the correct name.