Chime, the no-fees mobile bank valued at $500 million as of its last round, has put some of its funds to use with its first acquisition. The deal is for Pinch, a startup that was focused on helping millennials and other young adults build better credit. It was best known for a service called PinchRent, which allowed users to increase their credit scores over time by reporting on-time rent payments to credit bureaus.

Millennials can sometimes struggle to improve their credit, or are uneducated about what their credit scores mean, studies have shown. And like any younger demographic, they may also be afflicted with shorter credit histories, which impacts those scores, too.

Many in this age group have said that their low credit scores are holding them back, and millennials prefer debit to credit, Visa has reported.

Pinch’s focus was to provide a different way for its users to increase their scores, rather than simply using credit cards or making loan payments on time.

It did this by aggregating the information on rent payments and submitting that to the credit bureaus. (The bureaus can take rental information, but they don’t work with individual landlords. That’s where Pinch came in.)

The startup was preparing to announce a $1.8 million seed round of funding from Homebrew and Collaborative ahead of its acquisition.

Pinch had only been in beta testing prior to joining Chime, and was also planning to do a full public launch. Instead, it shut down its service by alerting users via email that its last day of business would be June 27, 2018. 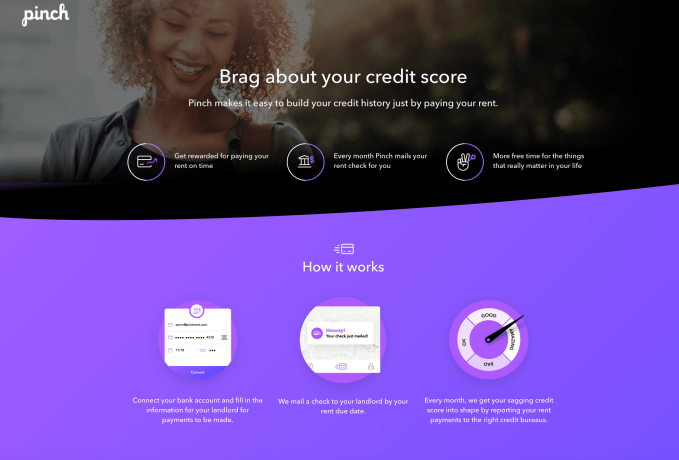 At the time of the service’s closure, it was in talks with Chime. But the deal itself only closed this Tuesday, we understand.

Chime declined to share the deal terms, but noted it’s an all-stock transaction and investors were happy.

The acquisition includes Pinch’s core team (5-10 people, depending on how the offers play out) plus founders Maia Bittner and Michael Ducker, who will now help the mobile bank launch credit and lending products over the next six months.

Chime, whose user base is 90% millennials, may or may not relaunch Pinch’s rent-paying service, but it will be soon moving into credit.

“I think, particularly, post the 2008 crisis, there’s been just a general distrust of big banks. But also, people have seen how the amount of credit [they have] can create challenges in their life,” says Chime CEO Chris Britt, discussing the struggles its users face in terms of building their credit.

“And younger consumers are so saddled with with student loan debt that the last thing they want to do is get more debt on a credit card,” he adds, explaining why young people turn to debit cards.

He says Chime’s goal now is to helping serve this group’s needs around credit with a set of millennial-focused products.

“The reality is the typical debit card and checking account do nothing to build your credit score. So as we think about the future set of products that we want to roll out, we’re very focused on helping our members with that part of their life,” he adds.

Chime is now one of several millennial-focused mobile banks on the market, which do away with traditional banking fees as well as brick-and-mortar location. Others like Simple and Stash are also available, but Chime has raised over $110 million, making it the largest in terms of funding.

Further down the road, Chime may venture into investing, but not until its user base is ready.

“It’s sort of irresponsible to be encouraging day trading if you don’t have the financial means…I think investment accounts and retirement accounts come first,” he notes.