Apple is launching an interesting new Apple Card program for people who have their application declined.

Declined Apple Card applicants may begin seeing notifications on their device later today that offer them the Path to Apple Card program. It’s an opt-in program that can run for up to 4 months. It leverages the information that Goldman Sachs used to determine their credit worthiness to outline why they were declined and to help them improve the specific financial markers that would make them more likely to get approved next time.

Once a user opts in on their device, they get a once-a-month update on their progress on specific tasks that are personalized to their rating.

The updates also include specific steps to take to improve each of those markers.

Once a customer has completed the program, they are invited to reapply to Apple Card. 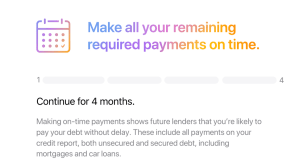 Doubtless the points above seem pretty straightforward to anyone with strong basic knowledge of how credit works. But I encourage anyone to whom those seem simple to consider how many people do not have a real window into the factors that determine whether an underwriting process at a financial firm accepts or rejects their application. No other interactive program like this exists in the credit card world as far as I know.

Normally, when you get a decline from a major credit card bureau, you get a message that you’ll get a letter in the mail days from now with “reasons” why you’ve been declined. The result is usually a bunch of paper with a relatively unhelpful single sentence telling you the factor that was an issue. Nothing proactive. 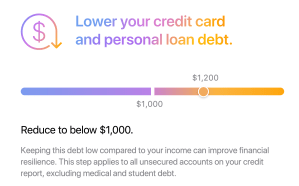 On the privacy front, Apple only knows whether you have chosen to participate in the program. It does not retain personally identifiable information or know details about the participants’ financial situation. Goldman Sachs is also not sharing this data with third parties for advertising or marketing. Pretty much the same deal as the Apple Card itself. 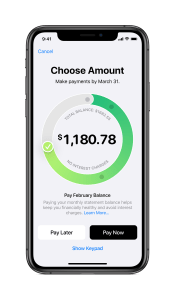 I’ve been bullish before on the way that Apple Card handles fiscal transparency. The “payment wheel” inside the card’s interface on iOS devices is one of the clearest, most well-made interfaces for any credit card ever offered. The approach Apple takes — an all out effort to make it as easy as possible not to pay interest on purchases unless you absolutely feel you want to — is wildly different from the industry norms.

This additional financial health tool fits well within that overall philosophy. As a side benefit, these steps will doubtless result in an overall credit score improvement for participants.

Apple has also recently launched an additional website that details the exact criteria that Goldman Sachs uses to determine acceptance and credit limit. It also offers additional details about things like how interest is calculated for the platform.

Article updated to note that the invites to participate are received on devices.