Many in the tech industry saw the threat of the novel coronavirus early and reacted correctly. Fewer have seemed prepared for its aftereffects, like the outflow of talented employees from very pricey office real estate in expensive and troubled cities like San Francisco.

And few indeed have seemed prepared for the Black Lives Matter protests that have followed the death of George Floyd. This was maybe the easiest to see coming, though, given how visible the structural racism is in cities up and down the main corridors of Silicon Valley.

Today, the combination of politics, the pandemic and the protests feels almost like a market crash for the industry (except many revenues keep going up and to the right). Most every company is now fundamentally reconsidering where it will be located and who it will be hiring — no matter how well it is doing otherwise.

Some, like Google and Thumbtack, have been caught in the awkward position of scaling back diversity efforts as part of pandemic cuts right before making statements in support of the protesters, as Megan Rose Dickey covered on TechCrunch this week. But it is also the pandemic helping to create the focus, as Arlan Hamilton of Backstage Capital tells her:

It is like the world and the country has a front-row seat to what Black people have to witness, take in, and feel all the time. And it was before they were seeing some of it, but they were seeing it kind of protected by us. We were kind of shielding them from some of it… It’s like a VR headset that the country is forced to be in because of COVID. It’s just in their face.

This also putting new scrutiny on how tech is used in policing today. It is renewing questions around who gets to be a VC and who gets funding right when the industry is under new pressure to deliver. It is highlighting solutions that companies can make internally, like this list from BLCK VC on Extra Crunch.

As with police reforms currently in the national debate, some of the most promising solutions are local. Property tax reform, pro-housing activism and sustainable funding for homelessness services are direct ways for the tech industry to address the long history of discrimination where the modern tech industry began, Catherine Bracy of TechEquity writes for TechCrunch. These changes are also what many think would make the Bay Area a more livable place for everyone, including any startup and any tech employee at any tech company (see: How Burrowing Owls Lead To Vomiting Anarchists).

Something to think about as we move on to our next topic — the ongoing wave of tech departures from SF. 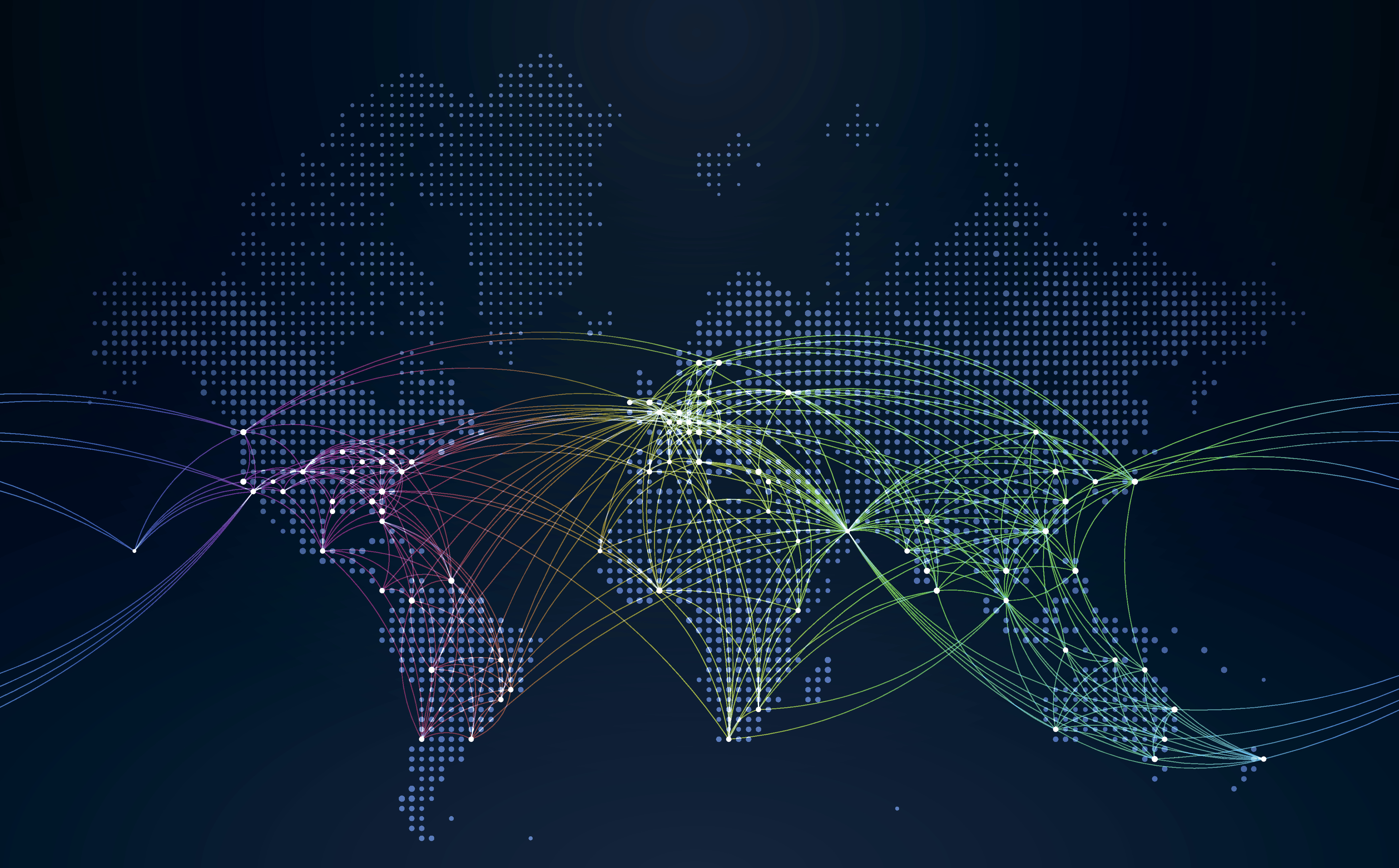 In this week’s staff survey, we revisit the remote-first dislocation of the tech industry’s core hubs. Danny Crichton observes some of the places that VCs have been leaving town for, and thinks it means bigger changes are underway:

“Are VCs leaving San Francisco? Based on everything I have heard: yes. They are leaving for Napa, leaving for Tahoe, and otherwise heading out to wherever gorgeous outdoor beauty exists in California. That bodes ill for San Francisco’s (and really, South Park’s) future as the oasis of VC.

But the centripetal forces are strong. VCs will congregate again somewhere else, because they continue to have that same need for market intelligence that they have always had. The new, new place might not be San Francisco, but I would be shocked just given the human migration pattern underway that it isn’t in some outlying part of the Bay Area.

And then he says this:

As for VCs — if the new central node is a bar in Napa and that’s the new “place to be” — that could be relatively more permanent. Yet ultimately, VCs follow the founders even if it takes time for them to recognize the new balance of power. It took years for most VCs to recognize that founders didn’t want to work in South Bay, but now nearly every venture firm of note has an office in San Francisco. Where the founders go, the VCs will follow. If that continues to be SF, its future as a startup hub will continue after a brief hiatus.

It’s true that another outlying farming community in the region once became a startup hub, but that one had a major research university next door, and at the time a lot of cheap housing if you were allowed access to it. But Napa cannot be the next Palo Alto because it is fully formed today as a glorified retirement community, Danny.

I’m already on the record for saying that college towns in general are going to become more prominent in the tech world, between ongoing funding for innovative tech work and ongoing desirability for anyone moving from the big cities. But I’m going to add a side bet that cities will come back into fashion with the sorts of startup founders that VCs would like to back. As Exhibit A, I’d like to present Jack Dorsey, who started a courier dispatch in Oakland in 2000, and studied fashion and massage therapy during the aftermath of the dot-com bubble. His success with Twitter a few years later in San Francisco inspired many founders to move as well.

Creative people like him are drawn to the big, creative environments that cities can offer, regardless of what the business establishment thinks. If the public and private sectors can learn from the many mistakes of recent decades (see last item) who knows, maybe we’ll see a more equal and resilient sort of boom emerge in tech’s current core. 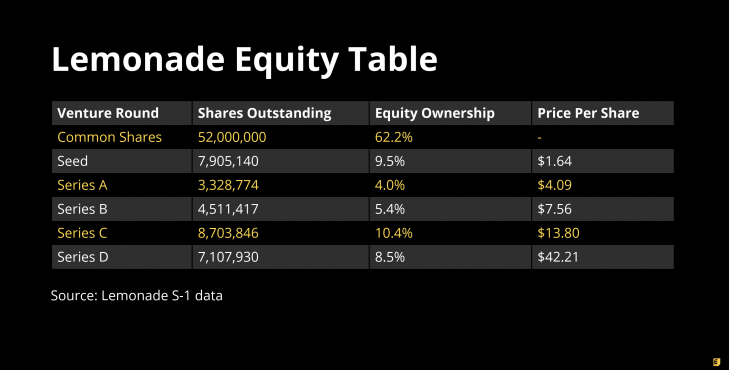 There are probably some amazing puns to be made here but it has been a long week, and the numbers speak for themselves. Lemonade sells insurance to renters and homeowners online, and managed to reach a private valuation of $3.5 billion before filing to go public on Monday — with the common stockholders still comprising the majority of the cap table.

Danny crunched the numbers from the S-1 on Extra Crunch to generate the table, included, that illustrates this rather unusual breakdown. Usually, as you almost certainly know already, the investors own well over half by the time of a good liquidity event. “So what was the magic with Lemonade?” he ponders. “One piece of the puzzle is that company founder Daniel Schreiber was a multi-time operator, having previously built Powermat Technologies as the company’s president. The other piece is that Lemonade is built in the insurance market, which can be carefully modeled financially and gives investors a rare repeatable business model to evaluate.” 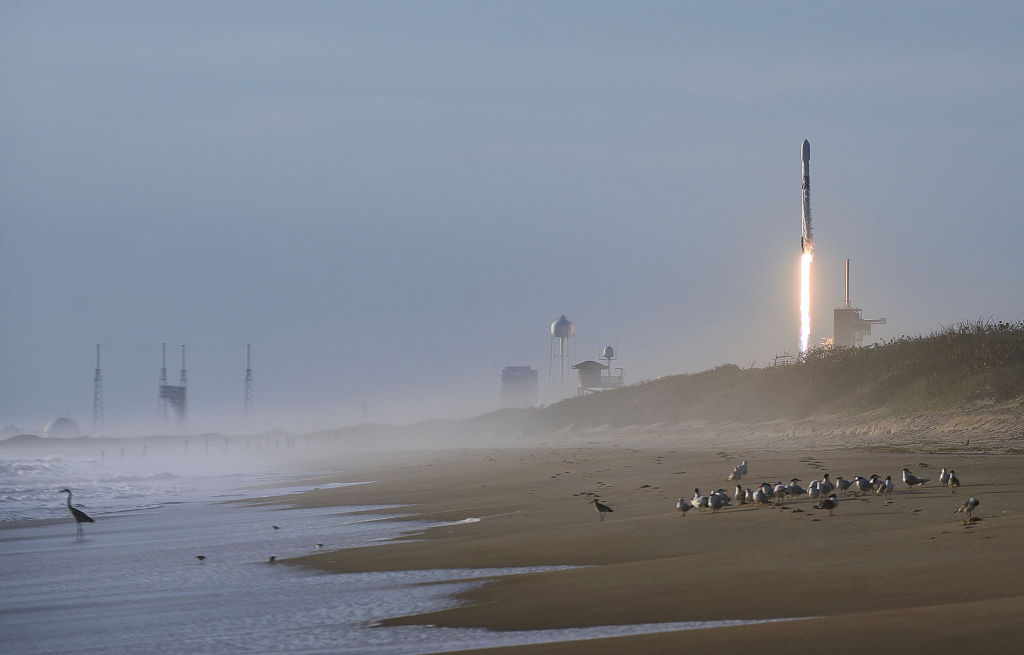 Our investor surveys for Extra Crunch this week covered the space industry’s startup opportunities, and looked at how enterprise investors are assessing the impact of the pandemic. Here’s Theresia Gouw of Acrew Capital, explaining how two of their portfolio companies have refocused in recent months:

A common theme we found when joining our founders for these strategy sessions was that many pulled forward and prioritized mid- to long-term projects where the product features might better fit the needs of their customers during these times. One such example in our portfolio is Petabyte’s (whose product is called Rhapsody) accelerated development of its software capabilities that enable veterinarians to provide telehealth services. Rhapsody has also incorporated key features that enable a contactless experience when telehealth isn’t sufficient. These include functionality that enables customers to check-in (virtual waiting room), sign documents, and make payments from the comfort and safety of their car when bringing their pet (the patient!) to the vet for an in-person check-up.

Another such example would be PredictHQ, which provides demand intelligence to enterprises in travel, hospitality, logistics, CPG, and retail, all sectors who saw significant change (either positive or negative) in the demand for their products and services. PredictHQ has the most robust global dataset on real-world events. Pandemics and all the ensuing restrictions and, then, loosening of restrictions fall within the category of real-world events. The company, which also has multiple global offices, was able to incorporate the dynamic COVID government responses on a hyperlocal basis, by geography, and equip its customers (e.g., Domino’s, Qantas, and First Data) with up to date insights that would help with demand planning and forecasting as well as understanding staffing needs.

Extra Crunch Live: Join Superhuman CEO Rahul Vohra for a live Q&A on June 16 at 2pm EDT/11 AM PDT
Join us for a live Q&A with Plaid CEO Zach Perret June 18 at 10 a.m. PDT/1 p.m. EDT
Two weeks left to save on TC Early Stage passes
Learn how to ‘nail it before you scale it’ with Floodgate’s Ann Miura-Ko at TC Early Stage SF
How can startups reinvent real estate? Learn how at TechCrunch Disrupt
Stand out from the crowd: Apply to TC Top Picks at Disrupt 2020

Theaters are ready to reopen, but is America ready to go back to the movies?
Edtech is surging, and parents have some notes
When it comes to social media moderation, reach matters
Zoom admits to shutting down activist accounts at the request of the Chinese government

TechCrunch’s top 10 picks from Techstars’ May virtual demo days
Software’s meteoric rise: Have VCs gone too far?
Recession-proof your software engineering career
The complicated calculus of taking Facebook’s venture money
The pace of startup layoffs may be slowing down

After a pretty busy week on the show we’re here with our regular Friday episode, which means lots of venture rounds and new venture capital funds to dig into. Thankfully we had our full contingent on hand: Danny “Well, you see” Crichton, Natasha “Talk to me post-pandemic” Mascarenhas, Alex “Very shouty” Wilhelm and, behind the scenes, Chris “The Dad” Gates.

Make sure to check out our IPO-focused Equity Shot from earlier this week if you haven’t yet, and let’s get into today’s topics:

And that is that; thanks for lending us your ears.