It’s a winner-takes-all economy. More and more labor markets act as lotteries, where a couple of “superstar” workers make extremely outsized returns relative to their peers — who may well have started from the exact same starting line.

In the tech world, two JavaScript engineers can potentially earn billions of dollars in differential compensation by simply choosing different startups to join, and that massive income spectrum extends to professionals from law to finance to research careers to even my friends in journalism.

For Charlie Olson and Eric Lax, that dynamic didn’t make intuitive sense. “We own 100% of our own future. And, you know, once you choose a career, you are locked in to the risk-reward risk preference of that career,” Olson said. Hit the lottery and your earnings skyrocket. For the majority of others though, there is no safety net — no insurance policy — that protects you despite pushing your hardest in the race to superstardom.

The two founders connected while at Stanford GSB and started looking around at their peers, some of whom may well be the superstars of business in the years ahead. They kicked around some ideas, but kept returning to this idea of trying to create a sort of pooled insurance platform for careers.

Their thinking eventually led to the creation of San Francisco-based Pando in mid-2017, a platform to build exactly that sort of career insurance pool among a group of peers. “We’ve created a marketplace to allow groups of people to come together to choose their pool, choose their group, and each person in that group agrees to contribute some defined portion of their uncertain future upside to the shared group,” Olson explained.

So for instance, a person and a bunch of their classmates in business school seem similar on paper. Statistically, one of them might do fabulously well in their careers, but no one knows right now who that will be. Pando’s hope is that those users will connect together and buy into their shared future returns.

The payout rules are set by the users of that pool, but there are some emerging guidelines that Pando is helping to productize. There is typically a financial hurdle to cross in terms of income, so that incomes below a certain threshold don’t pay out. For users who hit the threshold, typical contribution proportions tend to center around either 1-2% with larger numbers of pool users or 7-10% of a person’s income in some smaller pools. Dollars collected by the pool are distributed to all users equally.

One of the initial customer profiles for Pando is focused on creating a pool around professional baseball players. Contrary to the record-breaking earnings that get announced in the papers, many baseball players toil in relative obscurity making minimal dollars while still hoping for a shot at the big leagues. “You either leave the game with nothing or with huge amounts of money,” Olson said.

A Pando pool in this context could mitigate some of the extreme divergence of salaries seen in the game while also helping to create more camaraderie. “The idea of a group of people coming together with financially aligned incentives to create a partnership is a real motivation to see each other succeed,” Olson said. He said that the typical pool size on Pando is 5.7 people. In baseball specifically, the pool encompasses a player’s direct team income, but doesn’t include ancillary income like endorsement deals.

So a lot of this makes sense, but one thing that was less clear to me is how Pando convinces ambitious and talented folks to give up some of their upside. After all, no one makes it to the major leagues without thinking they are going to be the next A-Rod, or starting the next Facebook without thinking of themselves as the next Mark Zuckerberg.

Olson pointed out two things. The first is the data, which shows the distribution of outcomes in a field and the necessity for a pool to salve the human need for income security. And the second is to point out that having a portfolio of upsides is always better than using your own single career as your only bet on a financial future.

“Warren Buffett believes in himself. And yet, he has a portfolio of companies that he’s invested in. Venture firms believe in their ability to pick winners. And yet, you’ll never find one that has a single investment as their portfolio strategy,” Olson said. “Your agent is proud of you. And yet, he has a stable of clients, and he’ll make money from the one who makes the most. Why are you the only one that owns 100% of your own upside?” He said that argument and the cooperative feel of a pool helps to close deals.

The company officially launched in fall 2017, and raised a $3.3 million seed from Ulu Ventures, Pear VC, Avalon, Nimble Ventures and Stanford StartX Fund. The company revealed this morning that it raised a $8.5 million Series A in 2019 led by Kathleen Utecht at Core Innovation Capital with Slow VC and its seed investors joining the round as well. 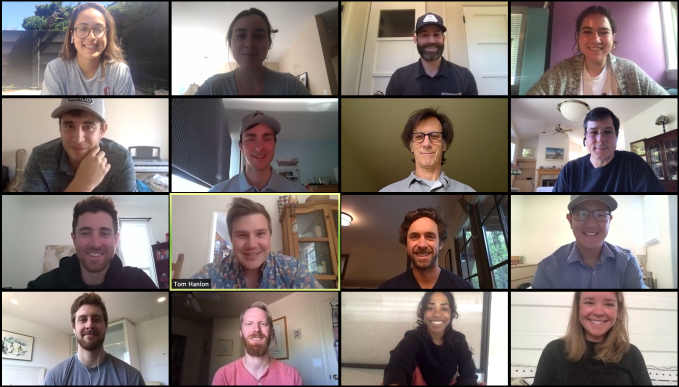 With the funding, the company has been expanding outside of its professional athletics initial target market into young professional markets like business school students, entrepreneurs and others who are embarking on high-risk, high-reward career paths.

While it’s still early days and the transition to a winner-takes-all labor economy is a tough trend to crack, Pando is offering a different take on the problem and is a thoughtful and innovative platform.