Hulu has now grown to more than 28 million U.S. customers, including 26.8 million monthly paid subscribers and 1.3 million promotional accounts, the company announced this morning as part of its annual presentation at the digital NewFronts in New York. In January, Hulu had 25 million total users, including both paid and promo accounts, and 20 million this time last year. The streaming service also today unveiled its new slate of shows and original programming, alongside other content deals and a new “binge advertising experience” that’s designed to be less intrusive.

On the content front, Hulu announced an expanded partnership with Marvel to bring two new live-action series to its service in 2020.

Though Marvel owner Disney is preparing to launch its own direct-to-consumer streaming service later this year, Disney’s majority ownership of Hulu is proving to be an advantage as it can shift some of the more adult-oriented Marvel properties to Hulu, instead of the more family-focused Disney+ streaming service.

That seems to be the case for the new Marvel series Marvel’s Ghost Rider, aka Robbie Reyes, who’s described as a “quintessential antihero, consumed by hellfire and supernaturally bound to a demon.” The other, Marvel’s Helstrom, features Daimon and Ana Helstrom, the son and daughter of a powerful serial killer, who track down the worst of humanity.

Hulu also today announced a new multi-year, multi-show partnership with Vox Media Studio, (Momofuku founder) David Chang’s Majordomo Media and Chrissy Teigen’s Suit & Thai Productions, to develop premium food-centric programming. One of the first shows, Family Style, will feature Chang and Teigen and will focus on family cooking; another documentary series will tap into Vox’s Eater, and its knowledge of the best restaurants in the world. 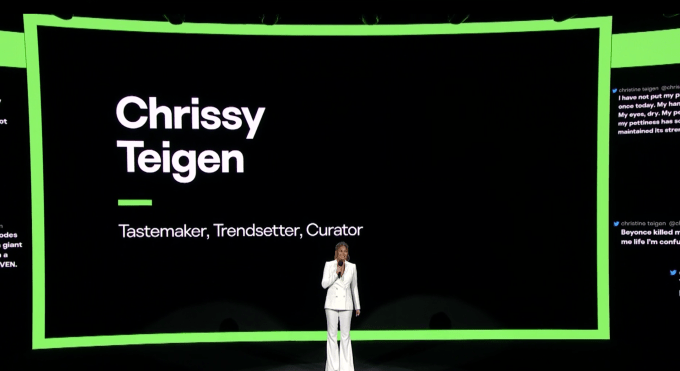 Teigen also scored her own two-year deal with Hulu to create original programming that could range from scripted content to original talk shows. (In other words, what Oprah is to Apple TV+, Teigen is to Hulu, in terms of having free rein.)

Meanwhile, with the newly greenlit series Nine Perfect Strangers, Hulu hopes to have a hit like HBO did with Big Little Lies, as the series adapts another of author Liane Moriarty’s novels for the screen.

Also like Big Little Lies, David E. Kelley and Nicole Kidman are again involved, the former as co-showrunner and co-writer along with John Henry Butterworth, and the latter starring in a lead role as the director of a boutique health-and-wellness resort promising healing and transformation to the aforementioned nine strangers. Kidman’s production company, Blossom Films, which exec-produced the first season of Big Little Lies, is also involved, along with Made Up Stories and Endeavor Content.

As previously reported, Hulu is running its own take on the Theranos scandal, with The Dropout, starring Kate McKinnon as Theranos CEO Elizabeth Holmes. And it’s renewing two freshman comedies, Pen15 and Ramy, for second seasons.

In one of several nods to the star-studded quality of the event, McKinnon shouted, “I touched George Clooney!” as she took the stage.

Other programming — new and old — mentioned at the event included the return of Veronica Mars, Looking for Alaska, Wu-Tang: An American Saga, Solar Opposites, The Act, Shrill, Crossing Swords, High Fidelity, Dollface, Four Weddings and a Funeral, Castle Rock, The Great, Reprisal, and, of course, The Handmaid’s Tale.

Plus, George Clooney pitched his upcoming miniseries Catch-22, recalling that he was last at an Upfronts event 25 years ago for the launch of ER, while star Kyle Chandler argued that the original novel — about World War II, written during the Korean War and published during the Vietnam War — will always be relevant. And Reese Witherspoon talked about her excitement in producing and starring in Little Fires Everywhere with Kerry Washington.

Hulu’s NewFronts announcements are really about the advertisers, of course. And this year, Hulu is pitching them a way to better target and cater to binge watchers — the viewers who are tuning in to watch for long stretches at a time. This “binge ad experience” is the second non-intrusive format Hulu has developed — the first being the “pause ad” that only appears when you press pause. These will roll out to more advertisers in August.

Binge ads will instead allow advertisers to target just binge watchers with creatives that are “situationally relevant” to their viewing behavior. Hulu says it will have more to share about binge ads later this year, but we’re hearing that the idea is that the brand’s ad has to be somehow tailored to the viewing experience — for example, an opportunity to watch the next episode commercial-free or a personalized offer.

The ad format will roll out in Q4, then open to all advertisers in 2020.

“This is a monumental time for Hulu’s advertising business and for brands who are looking to reach the most valuable audience in television,” said Peter Naylor, SVP and head of Advertising Sales at Hulu, in a statement released alongside today’s event. “Because of our viewer-first advertising principles, we’re scaling rapidly. We’re offering advertisers the most sophisticated targeting, the largest addressable footprint in on-demand television, robust measurement solutions, and new ad models,” he added. “Hulu is future-proofing TV advertising and transforming the way brands connect with consumers.” 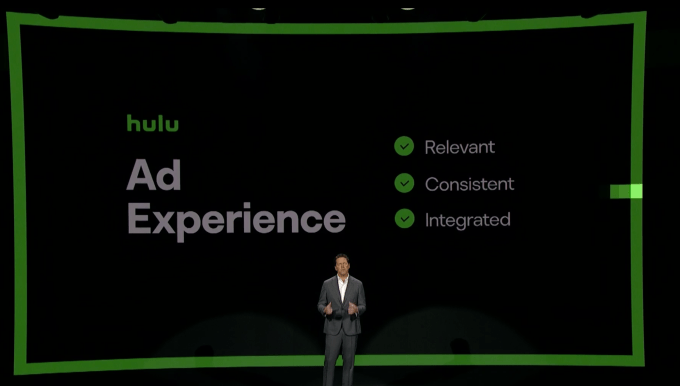 Hulu’s efforts in trying to figure out how to balance advertising with a quality TV experience, where viewers aren’t continually interrupted by repetitive ads, could be an advantage. Its focus on the user experience could help it better compete amid a growing range of free, ad-supported streaming services — a market that today includes the likes of Roku, Amazon (IMDb), Sinclair, Viacom (Pluto TV), Tubi, Google (YouTube), Walmart (Vudu) and others.

And it could give it a head start on competing with Netflix, if and when Netflix decides to run ads at some point in the future — a topic that was discussed earlier this week at NewFronts when an ad exec hinted that Netflix’s recruiters were already working toward a future that included advertising.

In addition to binge ads, Hulu announced a new program it calls “Friends with Benefits” (groan), which inserts special offers that look like advertorial. For example, an image touting the “Happy Blues” TV show would actually be an offer from Old Navy. A movie called “Bouquet” is actually an offer for flowers, and so on.

The company also shared some metrics related to its viewers and behavior today.

It noted that 80% of viewing takes place in the living room, and that half of its Live TV customers watch on-demand programming. And, 65% who watch a live sporting event also watch something on demand right after.

“In today’s direct-to-consumer world, viewers are demanding better when it comes to TV — from the user experience to their content choices to the advertising,” said Hulu CEO Randy Freer, in a statement. “Hulu’s continued growth, as well as the shows and initiatives announced today, reflect our deep investment in product, programming, brand, customer experience and business strategy to ensure that with Hulu, consumers can connect with the stories they love, at the right time and price, on any device,” he said.