Just to get this out of the way: Yes, Hulu is introducing an ad unit that will show up when you pause a video. But no, the ad won’t be a video.

Hulu says it has 25 million subscribers, the majority of them on an ad-supported plan — so they’re used to seeing TV-style commercial breaks before and during their viewing experience. However, Vice President and Head of Advertising Platforms Jeremy Helfand said the company realizes that playing a similar ad as soon as you hit pause would be bad for both viewers and advertisers.

For the viewer, “It can be jarring — you think you’ve paused the content, but you’re still seeing sight, sound and motion,” Helfand said. As for the advertiser, they don’t want to create a 30-second ad that the viewer doesn’t see because they’ve left for the kitchen or the bathroom, or because they unpause the show five seconds into the ad.

Conversely, he said that during testing, Hulu found that viewers accepted the format “if the ad is subtle and relevant.” 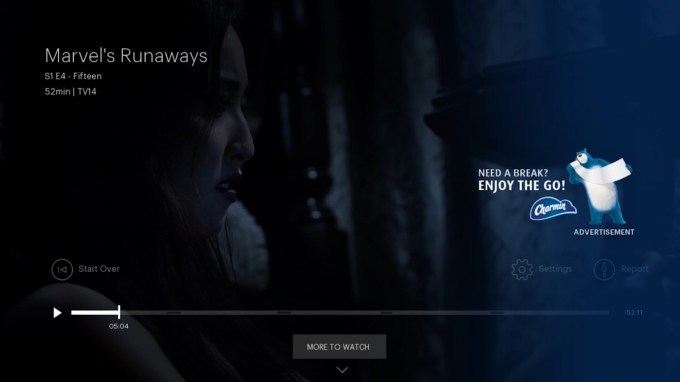 The Hulu Pause Ad is more like a translucent banner — or, as Helfand put it, “a car billboard on the side of the road” — that appears on the right side of the screen. This makes for a better viewing experience, as it’s less distracting than a video and you can still see your TV show underneath. And Helfand argued that it’s also better for the brand, because it allows them to get their message across in a quick and simple way.

Also, Pause Ads won’t appear until several seconds after you pause. That’s in case you’ve paused so that you can rewind or otherwise adjust the video, which isn’t really an ideal time to show an ad. If you start fiddling with the controls, the Pause Ad either won’t appear at all, or if it’s already on-screen, it will immediately disappear. Similarly, it should disappear as soon as you hit play again.

When asked if this might give advertisers another ad placement issue to worry about — say, if their brand shows up next to a risqué sex scene or a gory death scene — Helfand noted that Pause Ads won’t be appearing on episodes that have been rated TV-MA, and that Hulu allows advertisers to target or “anti-target” (explicitly avoid) based on genre. It also sounds like these capabilities will be further refined.

Hulu plans to launch the first Pause Ads in the second quarter of this year, and it’s already announcing two advertisers — Coca-Cola and Charmin. The ads will appear in select on-demand content in the Hulu library.

Helfand said the exact size and placement of the unit could continue evolving over time. In addition, Hulu is still figuring out the exact pricing model, but it’s envisioned as part of a larger package for advertisers.

And while it’s understandable for viewers to get annoyed when they see ads in new places, Helfand suggested that this is part of a broader push toward “non-disruptive formats,” where the ads don’t stop the video and interrupt your viewing experience. In fact, the goal is for these new formats to account for 50 percent of Hulu’s ad revenue within the next three years.

“The whole conversation that we’ve had in this market, should a commercial break be 10 or 15 seconds — it’s all disruptive,” Helfand said. Instead, he argued that the better question is, “How do you help provide the very best storytelling experience for viewers in an ad-supported service?”

Hulu drops the price for its streaming service to $6 per month, but raises prices for Live TV