Free TV and movie streaming service Tubi is preparing to double down on content acquisitions this year, the company announced this morning. The service today offers over 12,000 movies and TV series, totaling 40,000 hours of content. All of this can be streamed for free as the content is paid for not via customer subscriptions, but rather by advertising. Now the company is preparing to invest more than $100 million to expand its library this year, after hitting profitability in Q4 2018, and tackle new markets.

Founded in 2014, Tubi has benefited from the trend toward cord cutting, as well as the increasing number of younger consumers who never opt to pay for cable or satellite TV in the first place — sometimes called the “cord nevers.”

The company claims that its viewership increased by more than 4.3 times from December 2017 to December 2018, which allowed it to hit the profitability milestone. In the fourth quarter alone, it saw more revenue than in all of 2017 combined, it also noted. And it grew revenues by 180+ percent in 2018.

On the advertising front, the company says it ran campaigns from more than 1,000 advertisers in 2018, including those from the majority of the top CPG and automotive companies.

However, several aspects of Tubi’s business aren’t being disclosed alongside today’s news — only the highlights. What the company won’t say is how many monthly active users it has, how many hours they watch or how many ad impressions take place across its platform. These sorts of metrics are critical to measuring success in ad-supported video.

According to estimates from Sensor Tower, Tubi has close to 51 million installs on mobile, with 1.7 million of those coming in December 2018, a 21 percent year-over-year increase. That could indicate that Tubi’s viewership growth is largely taking place on other platforms — like TVs through media players or deals with service providers, like Comcast, for instance. 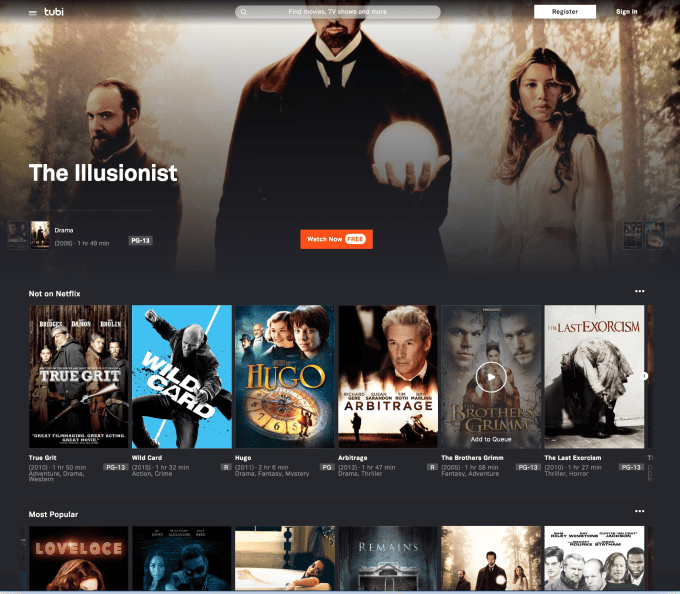 Along with its plans to grow its library, Tubi is preparing to expand outside the U.S. and Canada, with the first market launching this quarter.

To help fund its growth and content acquisitions, Tubi closed on $25 million in debt financing from Silicon Valley Bank in December.

These plans come at a time when Tubi’s business model has been seeing increased competition, and the company has been rumored to be in talks with Viacom.

For example, Roku entered ad-supported programming with its own The Roku Channel launch in fall 2017, and said earlier this month it now has 27 million user accounts. Of course, Roku doesn’t break that down by how many use its platform for other services, versus those who specifically launch Roku’s own free content — but that is its ad-supported channel’s potential reach.

Tubi, like many of these services, believes in its potential as consumers tire of being nickeled and dimed for video subscriptions.

“In 2018 we at Tubi saw tremendous growth as consumers, fatigued by SVOD subscriptions and services, sought alternative entertainment choices,” said Farhad Massoudi, CEO of Tubi, in a statement. “We will continue to use profits to make bigger bets on content, enhance the viewing experience, and continue to press ahead into new grounds in what is our core advantage: technology and data,” he added. 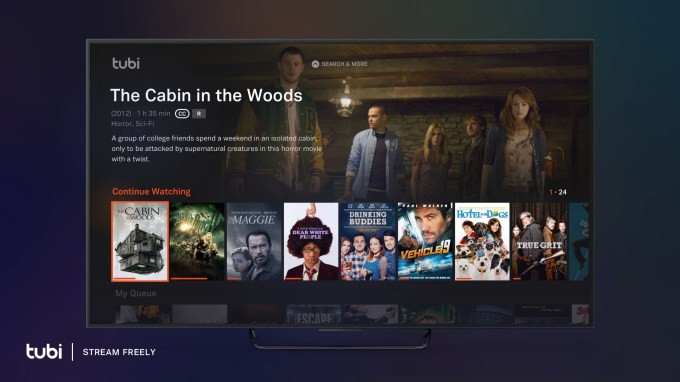 In reality, however, Tubi competes for attention among a growing streaming market, which includes those paid subscription video offerings. Today’s consumers are building out customized bundles that make sense for them — a little Netflix and HBO perhaps, fleshed out with some free content through services like Tubi, for example.

Tubi’s advantage, of course, is that it doesn’t have to spend the billions on content and originals that subscription video services like Netflix do to win users. Instead, it relies on titles that have mainstream appeal, but may not be winning any awards — like older movies, kids shows, B-flicks, horror films and reality TV.

At the end of the day, however, Tubi won’t necessarily gain from people tiring of subscription video, but from the growing influx of cord cutters who are searching for older or niche content not included in subscription libraries — or who just want to watch a free movie.